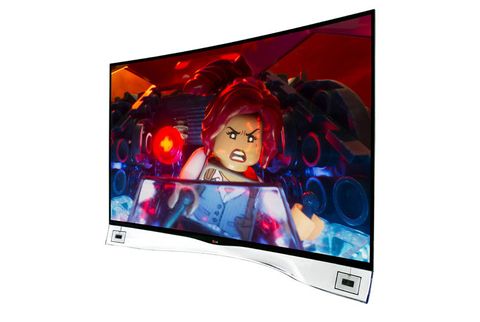 Part of it is the curved screen that’s been dividing opinions, but the other part is the OLED TV technology that we’ve been anticipating for years.

What’s so special about OLED? In brief, it aims to deliver even darker black levels than those found on current plasma screens, while retaining the punchy brightness of LCDs. In other words, the perfect balance.

OLED screens use pixels that create their own light and colour. There’s no backlighting needed like on LCD sets, so when a pixel turns off, it goes pitch-black. Likewise, colour reproduction promises to be richer and contrast should be stronger.

MORE: OLED TV: everything you need to know

On this front, LG’s design boffins have a trick up their sleeve. They’ve added a fourth white sub-pixel alongside the standard RGB (red, green and blue) group, to display more accurate colours and help lengthen the life span of the screen.

In contrast, white levels are bright and punchy. The picture as a whole is clean, detailed and has a natural colour balance. It’s lovely to watch.

Director Guillermo del Toro seems to use pretty much the whole rainbow in his fantastic monsters vs robots film, and the LG is skilled in delivering all the colours. It gets the balance just right, too.

It’s not a perfect screen, though. Detail disappears in the dark corners of rooms, and black coats and shirts tend to blend into each other to form a large mass of black.

It’s an issue we highlighted in the Samsung KE55S9C (the LG’s current direct rival), too, and seems to be an issue with OLED screens.

The cost of lush deep blacks and bright whites seems to be a lack of outright subtlety in those areas. A touch more crispness to the edges of objects wouldn’t go amiss in this screen, either.

However, we do like the subdued quality of the LG screen compared with the more impressive-looking and slightly oversaturated Samsung. The LG’s colours are just that bit more subtle and realistic – and more comfortable to watch – compared with the overly vivid palette and contrast of the Samsung OLED TV.

Motion isn’t the smoothest on the LG 55EA980W, and this is a more pressing issue than detail.

We turned the up the de-judder and de-blur settings just a touch, and it smoothed out some of the more obvious judders. However, it does accentuate the green-screen effect on the outlines of people on screen.

Broadcast TV and DVDs take a dip in quality, albeit a touch more so than we've seen in the Samsung. We’d like a cleaner, more capable upscaler in a £8000 TV.

Viewing angles are excellent – the contrast and colour reproduction stay well defined – but the curved screen has its ups and downs.

We debated the practicality of curved screens during the Samsung S9C review, and we're going to make the same point here.

Curved screens are more immersive, yes, but only as long as there's just one viewer. Anyone else sitting at an angle will see a slightly distorted picture that changes depending on the curvature of the screen.

This is less of an issue with flat screens, as the picture distorts uniformly across the flat plane.

We played The Adventures of Tintin in 3D and our first OLED passive 3D TV experience (the Samsung KE55S9C was an active set) was a mixed bag. Good news first: the screen looks very bright, even with the tinted 3D glasses on.

OLED’s natural vibrancy for colours and highlights delivers a much brighter picture with 3D than we’ve seen on previous LCD sets. On the downside, the picture could be smoother and more immersive.

Giving standard broadcast content a bit of 3D depth using LG’s 2D-to-3D conversion may not appeal to everyone, but it’s worth a go. The depth of field is gentle rather than outrageous.

Trying to put 3D glasses on top of your own specs can be annoying, so the clip-ons are a thoughtful touch from LG.

We didn’t mind listening to the LG 55EA980W’s ‘Clear Speakers’. The sound was loud, spacious and more satisfying to hear than the thin, tinny sound we’ve become accustomed to with flat screen TVs.

There are four 10W drivers in total, two of which you can see clearly displayed in the stand. There’s decent balance, and voices sound direct, if a little indistinct.

We were content listening to the 55EA980W with Freeview programmes, but would suggest investing in a decent 5.1 speaker package to do Blu-ray films justice.

Curved screens are all the rage when it comes to OLED TVs this year, and we can see why. They’re immediately attention-grabbing, and the slim screen with its gentle curve will make a cool statement in your living room.

With no need for backlighting, OLED screens can be incredibly thin and thus break the mould of flat screen TVs by going curvy. The LG 55EA980W’s screen measures 4.5mm at its thinnest – which is even thinner than the new iPad Air.

The surrounding bezel is so slim it’s barely there, and means the focus is purely on the 55inch OLED screen.

It’s a good-looking screen on the whole, but inspect it a little closer and there are a couple of small flaws.

The wafer-thin screen flexes just a little too much for our liking, for instance, and the stress-marks in the plastic stand are at odds with the premium feel we’d expect from an £8000 TV.

Unlike the Samsung KE55S9C (which sits inside a frame that further accentuates its curve), the LG’s contour is subtle. It sits freely on top of a clear plastic stand, but it’s well-supported so we don’t feel it’s perching too precariously on our TV stand.

On that note, make sure you have a TV stand that’s wide enough, as the LG 55EA980W did overhang just a little on our standard reference racks.

Discreetly hidden under that sleek carbon-fibre back panel is the LG OLED TV’s stash of analogue and digital connections.

Four HDMI inputs is plenty for hooking up your Blu-ray player, set-top box and games console, while one input is marked MHL (Mobile High definition Link), and can receive HD content from hard-wired Android devices.

There are also three USB ports and a single digital optical audio output. Composite, component and Scart connections for analogue sources are also available, but you’ll have to use LG’s bundled cables and adaptors.

A Freeview HD tuner comes as standard, and there’s a satellite tuner as well (but it’s not Freesat and won’t work in the UK).

An ethernet port for wired connection is our preferred method of keeping the LG TV connected online, even though the set has built-in wi-fi.

The LG is filled with all the bells and whistles you’d expect from a top-of-the-range screen, from smart TV content featuring catch-up and on-demand video streaming services, to the (surprisingly decent) voice and (often frustrating) gesture controls.

Fans of TV-based Skype calls and gesture control will be glad to know that LG has included a camera with the TV at no extra cost. It looks a bit like Xbox’s Kinect motion sensor, and you can attach it to the screen using sticky Velcro.

LG offers various ways of controlling the shiny new TV, and our favourite method sways between the standard remote control and the Magic Remote wand. The standard remote is the most familiar, with physical buttons that are easy to find and use.

The Magic Remote is a slim wand that curves naturally into the contours of your hand. It feels odd at first, but becomes instinctive to use after a while.

A cursor pops up on the screen when you start pointing the wand at the TV, while the click-wheel is useful for scrolling and selecting apps. There’s a subtle backlight, too.

The flat buttons offer basic volume, channel-change and smart TV controls, as well as letting you turning 3D on or off, an activate the voice control feature.

Yes, voice control. We’re usually filled with dread when having to use things like voice and gesture control on a TV, but the LG’s voice control is surprisingly decent. It’s particularly useful if you want to search for certain programmes.

Say ‘Doctor Who’ and not only will it recognise your speech without any fuss, it will pull up all the relevant results from BBC iPlayer and YouTube. We wish you could use voice control when searching within apps, though.

The LG’s current and only rival is the Samsung KE55S9C OLED, which offers a touch more pizzazz, albeit with smoother motion. However, this is only the first generation of OLED screens, and while we like what we see so far, there are also a few issues with outright subtlety that need to be ironed out for both tellies.

Price is another issue. We know this LG is a very expensive TV at £8000, but so is the Samsung OLED TV (£7000). But again, this is the first time we’re seeing OLED on such large screens, and we do expect prices to come down as they become more common.

The other issue plaguing the first wave of OLED screens? It’s not 4K Ultra HD. It doesn’t help there’s no native Ultra HD content available at the moment, but once it does appear, these Full HD-only OLED screens are in danger of being outdated very quickly. On the plus side, existing HD content will of course work, and look great, immediately.

Yes, this is a really expensive TV. And yes, it needs a couple of tiny tweaks, – but then it does sit at the cutting edge. There are plenty of high points with the LG 55EA980W – most notably its sleek screen and that utterly involving picture.

There’s plenty more to praise here than there is to gripe about. If this is the kind of thing we can expect from future OLED TVs, then we’re very excited indeed.