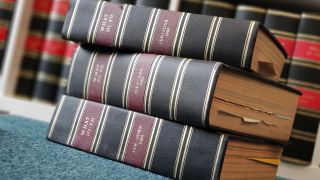 The World Day for Audiovisual Heritage – a commemorative day for everything AV – was chosen by UNESCO in 2005 and takes place every 27th October.

That’s today! So to mark the occasion we’ve delved through the dusty What Hi-Fi? magazine archives to sniff out our reviews of some landmark home cinema kit, from the first LaserDisc player to the first Dolby Digital AV amplifier to the first flatscreen TV we ever laid eyes on.

Some made a killer first impression, while others needed time for their new technology to rub off and find their place in the consumer world...

The ‘Nicam VCR’ was very much a ‘90s child, but at the end of the decade came optical format LaserDisc. The first LaserDisc player actually arrived in the mid-80s, courtesy of LaserDisc-supporter Pioneer, but it took a fair while for the format to catch on in Europe. At the time, the Pioneer CLD-S315’s £400 price tag made it cheaper than any Nicam VCRs on the market, and we heralded the fact it was “streets ahead of VHS” in terms of picture and had a crisp, clear sound ‘with none of the cloudiness that often afflict[ed] VHS cassettes’.

Of course, it wasn’t too long after this review that it gave way to the more mass-market VHS and newfangled DVD formats.

At £1700, this Yamaha was the cheapest Dolby Digital amp in the UK, although we noted that despite its exciting levels of detail, its sound was ‘unnatural’ and ‘tiring’, and a Pro Logic processor was more than capable of delivering home cinema kicks for considerably less money.

Below the review was a Dolby Digital explainer, which was necessary considering the Yamaha amplifier's arrival at the cusp of the Dolby Digital era. The then-new Dolby format brought six-channel (5.1) support over the well-established Dolby Pro-Logic that used four only channels: one for each of the front channels, one for mono centre and one for mono rear. The amplifier required a digital video source partner, such as LaserDisc, to hear the extra two channels.

‘The epitome of the multimedia revolution?’ we asked ourselves of the first DVD player you could buy in Britain, momentarily before answering with a confident ‘yes’.

‘It’s a CD player, fully specified and perfectly at ease with your existing music collection, yet it also happens to be capable of playing spectacularly enhanced movies’, we continued. Unsurprisingly, we didn’t find it competitive with standalone CD players when it came to music replay which, alongside the small buttons and small display, caused it to drop a star. But we were pleased with its performance when fed a well-mastered DVD disc. Only now, 20 years on, is the format starting to struggle.

8.5cm deep, 28.5kg heavy and with a 852 x 480 resolution - the mere existence of a 42in TV with those specs was deemed impressive at the turn of the century, a time when bulky rear-projection sets were still order of the day. (Isn’t it crazy to think we now have screens just a couple of millimeters thick?)

We say ‘TV’ - this Fujitsu was actually a tuner-less monitor that required a Sky or VCR box. It also needed connecting to speakers. And it was £5000. But we noted its performance rivalled previous TVs that cost twice the price - especially with DVD playback. The superlatives flowed from ‘flat TV marvel’ to ‘a wonderful way to round off the home cinema of your dreams’ to ‘a quite outstanding buy’. And thus began our long love affair with plasma TVs.

MORE: The best TVs around now

It’s fair to say that with us and Blu-ray players, it wasn’t love at first sight. ‘After all the hype, all the waiting’ the first two players we saw were caught in the trap of not having sufficient support and upscaling talents.

Blu-ray’s promise: support up to a 1920 x 1080p resolution, ten times the capacity of DVD discs, and audio support for the then-cutting-edge Dolby Digital Plus and DTS-HD formats.

Neither could properly cater for the DTS and Dolby surround sound formats planned for future Blu-ray releases (although the Pana provided 7.1 analogue outputs to support Dolby Digital Plus), and while we noted that the Blu-ray performance was ‘very impressive, with obvious improvements to both detail image and overall sharpness’ compared to DVD discs, and the sound quality potential was promising, upscaled DVD playback was no better than that the pictures dished out by DVD players costing around five times less.