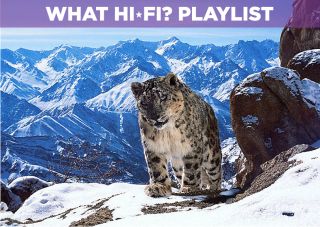 There was a point last November when confessing on a Monday morning to having missed the previous night's Planet Earth II episode was akin to admitting you'd never listened to The Beatles, sat through Titanic or eaten an orange.

The BBC’s sequel series to its landmark nature documentary (first aired in 2006) broke viewing figures for a programme of its kind, and will no doubt prove to be a popular Blu-ray. But there’s even better news: it's the first natural history television series to be released on Ultra HD Blu-ray – fitting, as the original Planet Earth was one of the first TV series to take advantage of the Blu-ray (and HD DVD) format in 2007.

The first 4K material that dripped onto the first-gen 4K-ready displays was mostly slideshow clips of nature: rolling hills, close-ups of flowers and, if we remember correctly, chinese lanterns – great, if not all that interesting, visual showcases for the technology.

Fast forward five years or so and we have arguably one of the best nature documentaries ever made in 4K and HDR. What a time to be alive, indeed.

While the first series took us ‘From Pole to Pole’ (episode one) to ‘Shallow Seas’ (episode nine) over eleven episodes, Planet Earth II comprises just six episodes – ‘Islands’, ‘Mountains’, ‘Jungles’, ‘Deserts’, ‘Grasslands’ and ‘Cities’ – plus a compilation ‘A World of Wonder’ episode. Shortchanged? Not a bit of it.

Planet Earth II was shot in 4K from the beginning of filming (back in 2013). Ergo, unlike some Ultra HD Blu-rays, this transfer is the real deal: true, bona fide, native 4K stuff.

As Planet Earth II was shot in Hybrid Log-Gamma – the BBC and Japanese national broadcaster NHK's form of HDR, which can, unlike alternative HDR formats, be decoded by both HDR and non-HDR receivers – it had to be re-encoded into HDR10, the HDR format suitable for physical media, for the Ultra HD Blu-ray.

It wasn’t a quick task, we’ve been assured, as 4TB files had to be handled and transported. But the complex process clearly wasn't rushed - and the results are superb.

The thistle-sharp definition and stunning colours are not only a credit to the videographer’s camera work, but also to the 4K Blu-ray disc format. Every corner of the TV is filled with a picture so crisp and detail-rich you’d feel confident tweezing out a specific hair from a Pygmy sloth’s coat.

HDR is all about expanding contrast ratio and colour reproduction capabilities, so it’s no shock that the pinks of flamingos, the yellow of an eagle’s claw and the multi-coloured feathers of a Hummingbird are all wonderfully vibrant and realistic.

The Galapagos’ volcanic landscape and the ‘Cities’ episode are perhaps the pinnacle of the HDR experience, the luminescent lava and Toronto city lights punching out from the plunging blacks of the ash-covered rock and the night sky.

It’s also the surfacing of smaller things that help to make Planet Earth II quite so immersive, from the flicker of flowers caused by a bird’s flapping wings, to the steam billowing from hot springs, to the snow specs on a bobcat’s fur coat – all brought to our attention by the exceptional picture.

On Komodo island, the slushy mud beneath the dragons is given almost tangible texture, and if you had the will, and patience, you could count each scale on the dragon without even needing a close-up.

They may look stunning, but these slow-movers certainly aren't much of a test of slow motion. For that, we turn to the 'internet-famous' racer snake versus baby iguana chase scene. And the edge-of-your-seat action looks clean as a whistle - the picture likely remaining much stabler than your emotional state during this heart-stopping showdown.

Hopefully you're getting the idea: the Planet Earth II 4K Blu-ray is hugely impressive, and a big step-up from the HD quality offered by the standard Blu-ray (which is also included, and still looks very impressive).

MORE: 4K Blu-ray vs 4K streaming vs Blu-ray: which is better?

The audio side of things are a little more tempered in comparison. While some 4K Blu-rays are treated to an immersive audio upgrade, whether Dolby Atmos or DTS:X, the track on the Planet Earth II 4K Ultra HD Blu-ray is the same as on the standard Blu-ray: 5.1 DTS-HD.

Anyone familiar with the making-of ‘Diaries’ segment at the end of each episode should have a good idea why; apparently chasing giraffes and lions across the Namibian desert with extra microphones rigs and overhead equipment wasn’t – who’d have thought it! – practical. You can tell Tom Hanks to go again, but not a hippo.

Nevertheless, as we listen through our reference PMC Twenty 23 5.1 speaker package, scuttling locusts and tropical storms are certainly made more immersive by what surround sound is offered.

MORE: 10 of the best film scenes to test your surround sound

Thanks to 4K and HDR, as well as improved camera stabilisation and aerial drone technology, the Planet Earth II Ultra HD Blu-ray exists as perhaps the best visual experience you can have in your home - and this year’s first must-have addition to any disc collection.

In fact, it might just be the best reason to finally buy that 4K TV and Ultra HD Blu-ray player.

We look forward to a repeated triumph with the upcoming Blue Planet II series...