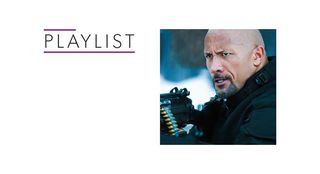 The more recent instalments of the Fast & Furious franchise have had more in common with a Looney Tunes cartoon than the original film. With plotlines becoming ever more extravagant, it's easy to forget this all began with a cop infiltrating the world of illegal street racing (itself a riff on Kathryn Bigelow's Point Break).

Seven films in and we've seen cars versus armoured tanks, and Dwayne Johnson shooting down a drone with a Gatling gun. So with the series appearing to have reached a juncture, does Fast & Furious 8 up the ante, or rein things in?

MORE: Watch trailers for the biggest new films coming out in 2017 and 2018

After the last film bid a tearful farewell to Paul Walker's Brian O'Connor, the 'Fast' crew have been exonerated for their crimes and are now living a less active lifestyle.

But that all changes when Vin Diesel's Dominic Torreto is roped into betraying his 'family' by Charlize Theron's Cipher, an anarchist hacker who intends to steal a nuclear submarine. The crew must now face their most difficult task yet – to take down their own leader, Dom.

We enjoy this franchise, but with this many miles on the clock Furious 8 shows signs of (engine) strain. The mix of implausible action scenes and attempts at a more dramatic narrative make for a less-than-credible mix.

Even at its worst, it's still highly entertaining - but Dom's character arc feels like the film is manufacturing a sense of drama after the horse has bolted. This has become a cartoonish series, and the balance of cheesiness and seriousness doesn't quite fit.

The main cast are reliably enjoyable. Dwayne Johnson's Hobbs sweats and punches his way through the film, and there's the welcome return of Kurt Russell's Mr Nobody. Less welcome is the introduction of Scott Eastwood's Little Nobody, who's a bit vapid.

Jason Statham's Deckard is curiously softer around the edges, which is odd considering he was a effectively a British-accented Terminator in Furious 7. Then there's Helen Mirren as Deckard's mum – Mirren playing the role like an East End gangster only adds to the film's overall silliness.

Theron's vilainous Cipher mostly issues ultimatums while standing behind a row of hackers tapping away on keyboards. The series has had better villains, but her skillset lends the action a scale that pushes the series into even more ridiculous waters.

And whether it's a horde of remote-controlled cars on the streets of New York or the Fast crew being chased by a Russian submarine, the action is truly bonkers. F. Gary Gray nods at the camera, orchestrating big action scenes with a sense of humour.

It's that huge scale that rubs uneasily against Dom's personal struggles and makes Fast 8 less successful than Fast 5 or 7. Those films had more zest about them, as well as better balance. Still, for demented action and silly dialogue, this is a fun ride.

For those who haven't moved to UHD, the Full HD Blu-ray still offers a really good picture. It's a bright image which promotes strong primary colours throughout.

Detail is excellent (the white hairs in Dwayne Johnson's beard make us feel a little old) and black performance is strong enough. Whites are clean, though in the Russian sequences they have a deliberately bluish hue. Complexions look a little overcooked in places, but for the most part appear naturally done.

We notice what we thought was film grain in low-light scenes, but as the film was shot digitally it would appear to be noise. It's not too distracting, but it can make for a slightly less detailed and murky image in a few places.

The disc has DTS:X, but our receiver defaults to the DTS-HD track. It's a solid-sounding effort with plenty of low-end presence - the engine growls are about as deep and throaty as Vin Diesel's voice.

Explosions are rendered with force, with the front and back surrounds getting a good workout in terms of placement and panning. Towards the end of the film, a torpedo rushes past from the front to rear speakers, and the enjoyable 360 degree sound effects in the prison riot scene have us rewinding the film to listen to it all over again.

Dialogue is clear and mostly prioritised through the centre, apart from a few instances where distorted dialogue comes from the front speakers. We like this track - it's energetic, forceful and engaging.

Fast & Furious 8 is another enjoyable entry in the series, though it falls short of Fast 5 and Fast 7. We like the diverse cast and globe-trotting nature of the series that leaves all sense of logic at the door, but the film stalls a little when it tries its hand at being serious.

Picture and sound are good, though we'd imagine the UHD ups the stakes with its Dolby Vision integration. If you have a 4K TV with Dolby Vision, that will be the version to get.

Nevertheless, most viewers will be content with the Blu-ray version - it offers entertainment in spades.