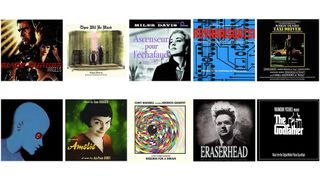 The best film scores are not merely an accompaniment to the images on screen; it is the sense that a film would be altered more fundamentally by changing its music than any other part of the script.

There are the themes indelibly etched, as easy to recall as any hit single – think Star Wars, Jurassic Park or Harry Potter – but the list below is concerned more with those eternally tethered to their visual partners, without which it feels you’d only have half a film.

And such is their importance, each of the ten we’ve selected provides a stern test for any home cinema, or even hi-fi system. In short, you’ll know immediately if your set-up isn’t doing them justice.

Few scores are so entwined with their film as Vangelis’s synth-heavy, reverb-soaked accompaniment for Ridley Scott’s Blade Runner. Largely improvised and recorded in real time while the Greek composer was watching the film, the music’s warmth is somewhat at odds with the narrative’s noir, yet takes in its sweeping landscapes and darkly romantic ambiance with every sustained note.

There Will Be Blood by Jonny Greenwood (2007)

Take in Jonny Greenwood’s dissonant string compositions alone, and you’d be forgiven for thinking There Will Be Blood was a horror film. His score casts a heavy shadow across the open plains of Southern California, injecting the kind of dread that allows Paul Thomas Anderson to explore this tale of a man possessed by wealth with greater subtlety.

Jonny Greenwood's There Will Be Blood soundtrack on Amazon

“It’s not for lack of love of the language that these films have no words,” said director Godfrey Reggio of his Qatsi trilogy. “It’s because, from my point of view, our language is in a state of vast humiliation. It no longer describes the world in which we live.”

It is up to interpretation whether Koyaanisqatsi, meaning “unbalanced life” in Hopi, is a celebration of industrialisation or its funeral march, and Philip Glass’s at once ominous and hopeful soundtrack leaves things equally ambiguous.

We could have included any of Bernard Herrmann’s many scores for Alfred Hitchcock in this list, but few are as atmospherically dense as this, his last ever work, for Martin Scorsese’s Taxi Driver. Horn sections echo New York's traffic and subway while brushed kits and plucked bass put rhythm to its underbelly, and few lines are so achingly beautiful as that of the saxophone in the main theme.

Alain Goraguer was at a creative peak when he was asked to score this early 1970s French animation, in which giant blue meditating Draags enslave human-like Oms on their planet Ygam, and it shows. A long-time collaborator and composer with Serge Gainsbourg, Goraguer’s break beats and psychedelic instrumentation are perfect backdrop for a surreal allegory that painfully remains relevant in the 21st century.

Director Jean-Pierre Jeunet was so taken by Yann Tiersen’s music upon hearing it that he bought the accordion and pianist’s entire catalogue to soundtrack this delightful French comedy, commissioning further pieces to be composed specifically for the film. Playful without straying into bijou, the score is as much part of Amélie’s character as any of the script Jeunet wrote himself.

Former Pop Will Eat Itself lead singer Clint Mansell was perhaps an unlikely film composer, but this industrial masterpiece, his second of six collaborations with director Darren Aronofsky, confirmed his immense talent. Equal parts sparse, foreboding and unequivocally violent, the schizophrenic character of his score is as mind-bending as Requiem For A Dream is a story.

Clint Mansell's Requiem For A Dream soundtrack on Amazon

More a collage of sounds than musical composition in the traditional sense, Eraserhead’s creepy ambient soundscapes of hisses, creeks and baby cries are quite terrifyingly unforgiving. Constructed by David Lynch and sound designer Alan Splet, the success of their experimentation is such that it feels at odds with film’s sonic landscape even more than four decades on.

Few main themes capture the essence of a film so immediately as Nino Rota’s trumpet-led The Godfather Waltz. This score was pulled from the Oscar’s shortlist at the last minute after it was found Rota had reworked some music from his Fortunella score, but its majesty is such that only a few bars will urge you to perform a few favourite lines.