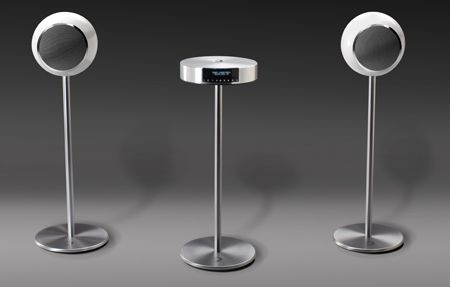 In strict sound-per-pound terms, this system isn’t without flaws, but there’s much to admire

Design can often be divisive: one person’s eye-candy can be another’s eyesore. Bravo, then, to French firm Elipson for daring to be different with its new Music Centre, which shatters the monotonous 435mm-wide regimentation of most hi-fi design.

The Music Centre’s 33cm diameter belies its jam-packed specification. Inside lurks a 24-bit/192kHz DAC, a slot-loading CD drive, a DAB+/FM tuner and enough inputs for most needs. You also get a Kleer-based USB wireless transmission dongle.

It works very well too: even when driving our Monitor Audio Platinum-series speakers, the Elipson sounds impressively assured, its fast-sounding amplification and largely neutral balance making it an enjoyable listen with Dry The River’s exuberant New Ceremony.

A new sphere of operation
If the Music Centre’s distinctive, it’s nothing compared with the radical form of its partnering speakers, the Planet Ls.

Beautifully finished, these spherical two-way speakers are supplied with a table-top ‘ring’ for installation (the floor stands shown here are £200 per pair).

They’re unconventional to behold and equally distinctive to listen to, with a fine grasp of vocals, crisply defined imaging and a lucid, rhythmic presentation.

Equally, though, they’re no rival for the drive or punch of the best conventional cones. Bass response is a little lacking too, although if you were sold on the speakers, you could always underpin them with an active subwoofer such as B&W’s PV1.

The Music Centre is the stronger of the two components here, and would probably be better partnered with something more straight-laced, such as a pair of B&W 685s.