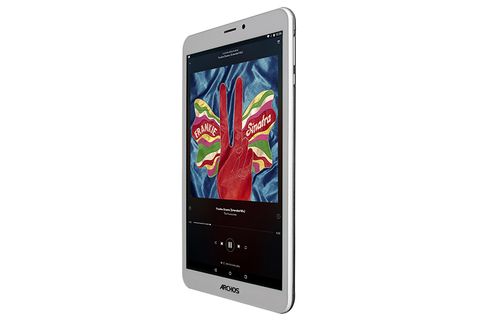 Even at this price, Archos makes too many compromises here to make the 80b Helium tablet a good buy

Archos has long been a name associated with the more affordable end of the tablet market, releasing its first effort when the iPad was little more than a rumour on the internet.

Unfortunately in the Archos 80b Helium, those years of experience don’t really shine through.

There’s a pretty poor balance of performance versus price here – it might well be a cheap tablet, but you’ll be reminded of that every time you use it.

Its build is a mixture of aluminium and plastic, and while it feels sturdy enough for the most part, it’s the attention to detail that’s missing.

For example, there’s a rough edge around the display where the casing sits a little higher than the screen, and the removable back panel is made from such thin plastic you fear you’ll break it before you actually manage to get it off.

It’s worth giving it a go though, as under here you’ll find space for two 4G SIM cards (great for travelling) and a microSD card slot, allowing you to boost the 16GB of onboard storage by a claimed 64GB.

Don’t expect to get very much from either of the on-board cameras though. Using the 2MP main camera, even pictures in good daylight aren’t able to dodge a decent amount of noise, with colours washed out, detail lacking and outlines fuzzy.

Take anything in low light and snaps appear blurry and very noisy indeed, while the 0.3MP selfie camera is next to useless, nixing the opportunity for any chance of decent video calls.

While it’s not the most premium looking tablet, its appearance doesn’t immediately give away the 80b Helium’s budget price – however, the 8in screen does.

The 1280 x 800 widescreen display is the same resolution as the likes of the Amazon Fire HD 8 and Lenovo Yoga Tab 3, but at around 160ppi, it doesn’t look as sharp as either of them.

This isn’t helped by the fact the screen is recessed, so much so that you can actually see a gap between the glass and the LCD panel below it. Icons look soft and lack definition as a result, and text is missing a degree of crispness that really helps it stand out on webpages.

It also doesn’t help that the Archos tablet appears to pull in desktop versions of websites as standard, rather than smaller-screen-friendly mobile versions.

We checked the settings and couldn’t find out why, but it will be frustrating for those who like to use their tablet for browsing.

On a positive note, when watching video loaded onto the device, the softness of the screen noticed elsewhere appears to be less of an issue.

It’s still not the sharpest of pictures, and there’s a considerable lack of fine detail that helps to really bring pictures to life, but it’s still watchable, with a warm colour palette that’s not overdone.

Don’t think about trying to use this outside though – the screen really lacks the brightness for it to be visible in daylight.

This also affects its contrast levels, with whites unable to punch through a dark scene with any real impact, which leaves it looking a little flat.

There’s no doubt that performance on most tablets at this level requires some patience, but we’d argue the Archos demands a little more still.

Everything takes a good few seconds to wake, play or load – so much so that you often find yourself tapping something again in fear your touch hadn’t been registered.

Expect some jittery behaviour if you have too many things open at once too, and accept that the odd crash is par for the course if you push it too hard (and that’s not very hard at all). That’s not unlike a lot of other tablets at this level, but something to bear in mind all the same.

To its credit, there isn’t loads of bloatware from Archos taking up the 80b Helium’s 16GB on board storage – you’ll get its video, email and messaging apps, but there’s plenty left to Google too, including the browser and music player.

MORE: Dolby Atmos for mobile - everything you need to know

When it comes to music though, there’s not lots to love. Timing is poor, organisation needs to be tighter and there’s a hint of hardness in the bright top end affecting the overall balance too.

It briefly helps the Archos 80b Helium sound a bit more exciting than the more laid back Amazon Fire HD 8, but it ultimately lacks the refinement for enjoyable longer listens.

It doesn’t go very loud either, and even at full volume we wanted more from it. Certainly don’t expect this to cover the hum of an airplane engine or the buzz of a noisy office or train carriage without the help of some noise-cancelling headphones.

There is a single mono speaker for listening out loud, but we wouldn’t recommend it. Not only is it easily covered if the tablet is held in the wrong way, but it’s also thin and tinny, and lacks any sort of weight.

Stick to headphones whenever you can.

When a tablet is £95, you wonder just how much you can expect from it. But we’d say it’s a lot more than this. For not a lot more money you can get better built, better performing tablets.

The dual 4G SIM is a saving grace for those needing on-the-go connectivity, and a fairly rare proposition at this price, but for the majority of people the Archos 80b Helium just makes too many compromises on core functionality.

See all our Archos reviews