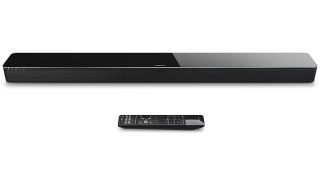 Bose has been a stalwart of the hi-fi scene for almost 60 years now. More recently, its audio remit has expanded somewhat to include smart speakers and Bose soundbars.

It's the latter we're dealing with here. A soundbar is a speaker that sits beneath your TV and aims to create the effect of surround sound. Not only can they be cheaper than full 5.1 systems, they're more compact too, as there are no separate speakers to place around the room (and no cables to trip over).

Thanks in part to the strength of the Bose brand name, Bose soundbars have become increasingly popular, with a reputation for quality but perhaps at a price. So is this fair? And should you buy a Bose soundbar? And what else should you consider before you decide? We're here to answer all those questions, and probably a few more.

The most recent Bose soundbar to pass through our testing labs was the Bose SoundTouch 300. This £600 ($699/AU$699) soundbar earned a solid if unremarkable three stars - we loved its style, streaming features, app user experience and all-round specification, but the overall sound quality was found lacking compared to alternatives such as the Dali Katch One and Sonos Beam.

Still, there's a lot to like about the SoundTouch 300. As well as working as a standalone TV speaker, it can become the heart of your surround sound system if you add a Bose wireless subwoofer and wireless surround speakers. It will still be more compact than most surround sound set-ups, and because the units are wireless, there will be minimal trip hazards.

Multi-room functionality also comes as standard. That means that when you sync it to a compatible speaker in another room, you can play the same music from both. Or have each play something different, but control them both from the same phone. Handy.

It has Bluetooth for offline streaming from a phone, tablet or computer, and NFC means you can wirelessly pair your device with it from a single tap.

The app is geared up for music lovers, too. It lets you stream tunes direct from Amazon Music, Spotify and Deezer. Or you can access locally stored music files from your device.

It has decent music chops, then. But first and foremost this is a device for enjoying movies and TV shows. Bose's PhaseGuide array technology separates the audio channels of a soundtrack to spread it out wider than the bar's physical size.

QuietPort technology aims to give distortion-free deep bass at any volume, and the ADAPTiQ calibration feature helps optimise the sound for your specific living room environment.

While the SoundTouch 300 was by no means a world-beating soundbar, it did have solid performance and some nice audio touches that bode well for Bose's more recent soundbar endeavours.

What about the latest Bose soundbars?

The SoundTouch 300 has since been followed by four models.

The top-of-the-range offering is the Bose Soundbar 700 (pictured above). It looks suitably premium, and has some features that help it stand out from the crowd, such as the ability to pair it with wireless headphones and control them both independently - so you can mute the soundbar and crank up the volume on your cans. That way, you can enjoy actions flicks as loud as you want without disturbing anyone else in the room.

The Google Assistant and Amazon Alexa personal assistants come built in, so you can simply speak your commands without lifting a finger. A neat light lets you know at a glance whether the personal assistant is listening, thinking or speaking, so you're in no doubt as to what's happening.

It supports Apple Music, Spotify, Deezer and Amazon Music, as well as Apple AirPlay 2, Bluetooth and wi-fi wireless technologies. The bundled remote is pretty cool, too - it only lights up the buttons you need for your chosen action, which simplifies things considerably. The Soundbar 700  costs £799 ($699, AU$999).

If your budget won't quite stretch to the Soundbar 700, the Bose Soundbar 500 might be more you. This £499 ($499, AU$799) model also comes with Alexa and Google Assistant, wi-fi, Bluetooth and Apple AirPlay 2. There's also the same Adaptiq Audio Calibration tech for fine-tuning the sound to match your room layout.

It has a slimmer profile than the Soundbar 700, but also a little less oomph. But it too can send audio to a pair of wireless headphones that can be controlled independently, so you can tuck into a boxset while your other half snoozes on the sofa.

Next is the Bose TV Speaker. This is much more basic than the Bose Soundbar models - there's no wi-fi, no Apple AirPlay 2, and several of the more advanced features are missing. Thankfully, this is reflected in the price. It will set you back £239 in the UK (it's not on sale elsewhere yet).

Lastly, there's the cheapest Bose soundbar, the Bose Solo 5 TV Sound System. Again, it lacks the more sophisticated features like wi-fi and voice assistants, but then it is a lot cheaper. It costs £209 ($199, AU$299).

Should I buy a Bose soundbar?

The latest Bose soundbars span a wide range of budgets, from pretty pricey to bargain bin. Depending on your needs, there could well be something for you.

The top-of-the-range Bose Soundbar 700 has all the features you could want, including voice assistant support and music streaming services built right into the Bose app.

The cheaper models, meanwhile, are more compact and less intrusive, and could be a good option for those on a tighter budget.

We haven't tested these models yet, so can't give a definitive verdict. But Bose products usually deliver decent sound, so there's good reason to expect the same of these soundbars.

Will they be the best sound-per-pound value performers? In truth, and based on all the soundbars we've reviewed over the years, there's a fair chance there will be a better value offering from an alternative brand.

If you see a deal on a Bose soundbar, it could prove a wise investment. But don't just go splashing the cash as soon as you see a discount: check the feature set first, as the cheaper models are much lower spec than their pricier siblings.

Look out for Bose's Adaptiq Audio Calibration tech (which calibrates the audio output to match your room), wireless tech like wi-fi, NFC and Apple AirPlay 2, and voice assistant support if you want to control it with your voice. This will also be useful if you have other smart home appliances dotted around the house (like lights and thermostats), as you can control them from your soundbar.

Of course, your options aren't confined to Bose. And it may well be you can get better sound performance, in relation to money spent, from looking elsewhere.

Have a look at our best soundbars guide to see our top-rated models to suit all budgets. The Sonos Beam is currently the soundbar to beat, thanks to a thrilling combination of awesome performance and reasonable price. Those wanting to spend a little more could be taken with the Sonos Arc, while those on a tight budget will want to check out the JBL Bar Studio.

Or you could go all in on a surround sound speaker package. In which case, you'll be wanting our guide to the best speaker systems.

Whichever option your choose, it should represent a solid upgrade on your TV's sound...