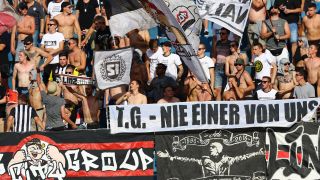 Like many sporting events right now, LASK vs Manchester United is a coronavirus-hit first leg and will be played behind closed doors in Austria. At present, there's no word on how the second leg at Old Trafford will look.

This is the first time that the Linz/Pasching-based club has ever played English opposition. They're currently flying high at the top of the Austrian Bundesliga, six points clear of Red Bull Salzburg and on course for their first championship since 1965.

So far in the competition, they've made it past Rosenburg, FC Basel, PSV Eindhoven, Sporting Lisbon, CSKA Moscow and AZ Alkmaar among others - no mean feat. They're to be underestimated at your peril. United may just be a bridge too far, though, particularly without the help of their home fans.

LASK will be without midfielder Thomas Goiginger but otherwise it's United with the personnel problems. Anthony Martial, Paul Pogba and Marcus Rashford are all still out. It's expect that surprise success Odion Ighalo will start up front.

Tune in this evening on BT Sport 2 at 5.55pm and take a look below at how to get a LASK vs Manchester United live stream on your mobile phone with the BT Sport app.

Football fans in Austria, Canada, Germany and Japan get the chance to watch Manchester United vs Club Brugge for free. DAZN has the rights to show the Europa League knockouts and a whole host of sports in these territories, and, best of all, DAZN offers a 1-month free trial. So long as you've not used yours already, then you can fill your boots.

LASK vs Manchester United live stream DAZN free trial
DAZN has the rights to the Bundesliga, UEFA Champions League, UEFA Europa League, US Sports, Fightsports, and much more live and on demand in Austria, Canada, Germany and Japan. Try free for 1 month. Cancel at anytime.View Deal

Sadly the DAZN free trial isn't available to those outside these regions. If you are a DAZN customer but travelling abroad, you'll need to sign up to a VPN service to make sure you can access the DAZN LASK vs Manchester United live stream wherever you are.

It's also worth noting that there are free streams on terrestrial channels such Match TV in Russia, if that's where you happen to be. You can find a full list of the world's broadcasters with rights to show the live Europa League football here.

Watch LASK vs Manchester United live in the UK

BT Sport comes in 4K HDR, beamed at 50fps on BT Sport Ultimate, channel 433. If you're hooked up specifically on the BT TV platform then it's also available in with Dolby Atmos sound. Manchester United vs Club Brugge is not the chosen game for BT Sport Ultimate tonight, though. Instead, you'll have to enjoy it in HD on BT Sport 2.

BT Sport Ultimate is not available on the Sky TV platform but anyone with an Xbox, PlayStation, Apple TV or a Samsung TV can watch LASK vs Manchester United using the BT Sport app with the BT Sport Monthly Pass for just £25. No contract required.

BT Sport Monthly Pass for £25 per month
Enjoy the Europa League, Champions League, FA Cup, Premier League and more in 4K HDR, all contract-free through the BT Sport app on games consoles, Apple TV and Samsung TVs. You do not need to be a BT customer and can opt out at any time.View Deal