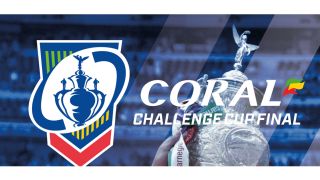 Saturday sees the climax of the Rugby League Challenge Cup competition, as Warrington Wolves and St Helens face each other in the showpiece final at Wembley.

Fans from the north of England will be descending on the capital this Saturday, as will Prince Harry, who is set to attend the 118th Challenge Cup Final in his role as patron of the Rugby Football League.

St Helens will be huge favourites going into the match – they currently lead rugby league’s Super League competition and sit a massive 16 points ahead of second-placed Warrington – but this is the first ever meeting between these two teams in the history of the final.

The Challenge Cup Final kicks off at 3pm on Saturday 24th August, and here’s how to tune in wherever you are in the world.

Live stream the Challenge Cup final from anywhere in the world

Live coverage of the Challenge Cup Final starts at 2pm on BBC One and BBC iPlayer, where you’ll get all the pre-match build up ahead of the 3pm kick-off.

If you’re out of the country on your summer holidays or are outside the UK for work or otherwise, you’ll find yourself geo-blocked and unable to access iPlayer.

The online streaming service is only available for TV license holders in the UK, but there are ways to access the service from abroad.

Perfect for any kind of web use that you'd like to keep private, a VPN will help you watch rugby, football, cricket or even a different Netflix or Prime Video library from wherever you are in the world. So, if you want to enjoy the Challenge Cup, Super League, Premier League or the Ashes – or just feel more secure online – then check out a VPN free trial.
View Deal

There are many VPN providers out there, with some more reliable and safe than others. A paid-for service is more likely to get something that's secure and dependable. The VPNs we recommend are the following:

Which has a 30-day money back guarantee and brings VPN access to smart devices including the Amazon Fire TV Stick, laptops, TVs and both Android and iOS mobiles and tablets. Sign up for an annual plan now and you'll also get 3 months completely free!

Once you've chosen and installed your VPN of choice, open the VPN app, select the country of origin of the Challenge Cup live stream you’d like to access, then head back to your chosen streaming service and fire up the all the action from Wembley.

If you live in the UK, have a TV license and own a Smart TV with the BBC iPlayer app, or have access to the iPlayer app on a tablet or smartphone, you’ll be able to log in stream the final in HD. It won’t cost you a penny over wi-fi, although you’ll need to be aware of how much data you’re using if you decide to stream over a mobile network.

Rugby League was used as one of the first trial broadcasts for the BBC’s live 4K content on iPlayer, too, but there’s no word yet on if you’ll be able to enjoy this year’s final in Ultra HD. If it becomes available, we'll be sure to let you know.