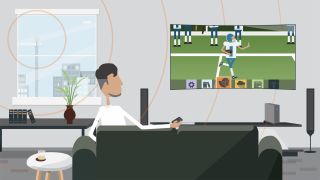 ATSC 3.0 is the right and proper name of what's been branded as NextGenTV – both referring to the evolution of digital TV standards in the USA. It's set to bring 4K UHD resolution, HDR picture quality and Dolby Atmos to live TV channels from 2020, which could mean that the next time you watch the Super Bowl, it will look and sound a whole lot better.

ATSC 3.0 may sound too good to actually happen any time soon, but this is far from vapourware. ATSC 3.0 has already been rolled out in South Korea, when it became the first country in the world to broadcast live 4K UHD programming in 2017.

In fact, ATSC 3.0 has already been deployed in the USA, with a handful of ATSC 3.0 stations transmitting in places such as Portland, Santa Barbara, Dallas, Orlando and Las Vegas, with many more cities and states readying to go live.

Read on for all the information on ATSC 3.0 and find out how to make sure you're ready to receive NextGen TV at home.

ATSC is the digital TV system adopted by some countries during the TV digital switchover, when the analogue live TV signal was replaced by a digital one.

ATSC is the successor to the NTSC analogue standard and is mostly found in North America (USA, Canada, Mexico). It is also the digital TV format of choice in South Korea, Dominican Republic, Suriname and a few other places.

ATSC 3.0 is a wrapper name for a host of digital TV standards and features, all set to make viewing live TV better. It's an OTA (over-the-air) standard, rather than cable, meaning that you receive it using an antenna. It's also IP (internet protocol) based and can work in tandem with any data connection you may have for some of its more enhanced features. This does not mean you'll need an internet connection to watch broadcast TV on ATSC 3.0, though.

ATSC 2.0 was planned but never launched, as it was outdated even before it was finished. As such, ATSC 3.0 contains everything that ATSC 2.0 would have plus a whole lot more to keep it as future proof as possible. Just like current broadcast TV, ATSC 3.0/NextGen TV will still be free to watch in the US.

Those in the UK and Europe will be pleased to note that their home digital TV standards, known as DVB-T2, already contain the scope for all the picture and sound quality boosts that ATSC 3.0 brings. These include HDR, Dolby Atmos, 4K UHD and HFR too.

The headline feature of NextGen TV is the picture quality. Until now, live TV broadcasts maxed out at either 720p or 1080i resolution, but ATSC 3.0 can take things up to 2160p 4K in HDR, with wide colour gamut and at up to 120fps as well. That's thanks, in part, to a boost in the amount of data in the broadcast signal from 19.4 Mbps to a variable bitrate of up to 57 Mbps.

That means at least a four-fold increase in detail, better contrast control, improved colour reproduction and the possibility of high frame rate (HFR) films and TV. For the time being, 4K HDR TV and films are only available through apps such as Netflix in the USA, so it represents a positive change.

But don't expect 4K HDR everywhere immediately from launch. It will take a while for the networks to provide the video feeds. Upgrades to both the recording and broadcast equipment will be required, and that could take a while.

The 2020 Olympics was supposed to be the first big push, but doubts over the viability of large sporting events during the coronavirus outbreak could temper the appetite to throw everything at 4K just now. A full EPG of 4K HDR live broadcasts could be a few years away, but there's every reason to expect a few special events at the maximum quality before then.

You will need an ATSC 3.0 tuner to be able to watch NextGen TV, but that won't necessarily mean buying a new TV. Two of the biggest TV manufactures, LG and Samsung, are both Korean and, given their home nation's early adoption of the latest digital TV standards, are well ahead on ATSC 3.0 tuners.

Along with Sony, many of their recent TV sets already come future-proofed with an ATSC 3.0 tuner. Check the specs of your model to find out whether it has one.

Even if your set doesn't have one, then you'll be able to buy an ATSC 3.0 tuner as an external set-top box that you can attach to your TV. Theoretically, you'll only need one such tuner for your whole home, which could then split the signal to all of your TVs. Hopefully, some boxes like these should arrive on the market for launch.

Media streamer companies, such as Roku, may also take up the opportunity to add ATSC 3.0 tuners to their sticks and boxes. Google, Amazon and Apple may prefer you to receive your 4K HDR programming through their respective stores instead. So, an ATSC 3.0-enabled Google Chromecast, Amazon Fire TV Cube or Apple TV 4K box is not a certainty.

The only other piece of kit you'll need is an ATSC antenna, but any HDTV-enabled OTA antenna that you're already using for your broadcast TV in the USA will also work for the ATSC 3.0 signal too.

ATSC 3.0 isn't just about picture quality. One of the other major digital TV upgrades is on the audio side. ATSC 3.0 will include the Dolby AC-4 format, which allows for up to 7.1.4 channel audio support, including sound formats such as Dolby Atmos and DTS:X. That's a significant step up from where we are at the moment with ATSC 1.0, which only goes as far as 5.1 surround sound.

Dolby AC-4 will be smart enough to adapt the sound provided according to the type of audio kit you have in your set-up. So, it will give you the maximum channels available on the content up to what your AV gear is able to decode.

ATSC 3.0 is also designed for mobile use and there are already mobile chipsets available that include ATSC 3.0 tuners. As such, if you buy a phone, tablet or in-car device with one of those inside, you'll be able to watch live broadcast TV on a portable wherever you are.

As ever, don't expect Apple to jump right on board with the iPhone but, given that Korea is already way ahead, an ATSC 3.0-enabled Samsung Galaxy mobile could be on the cards. With so much potential for advertising along with live TV, expect such devices to be heavily subsidised. Speaking of which...

Like it or loathe it, advertising pays for free-to-watch broadcast TV, and ATSC 3.0 will make commercials smarter than ever before.

One of the internet-connected features of the package is that it will be able to offer broadcasters vastly improved metrics on audience data – that could include detailed information on the viewer and their habits. The degree to which all this will be allowed remains to be decided by the FCC.

The result will most likely be targeted commercials that are closer to the kind of accuracy you get from users' internet browsing habits. That could either be highly useful or frighteningly intrusive, depending on your point of view.

A more positive connected feature of ATSC 3.0 is the emergency alert system. With greater audience knowledge, including geo-tagging your viewing location, ATSC is working on the ability to use TVs, mobiles, tablets and everything else with an ATSC 3.0 tuner to deliver emergency information.

That could mean broadcasting location-specific alerts and evacuation plans in the event of natural disasters, cutting down on critical time and helping to save lives.

ATSC 3.0 broadcasts are already live on some stations, however, the original May 2020 launch was delayed by the COVID-19 pandemic. Keep tabs on where ATSC 3.0 channels are available on the ATSC website's NextGen TV deployment page.

But there's no need to worry about upgrading to ATSC 3.0 at all for the time being. Each network is obliged to provide a simulcast of both an ATSC 1.0 and ATSC 3.0 version of their channel at least for the next five years.