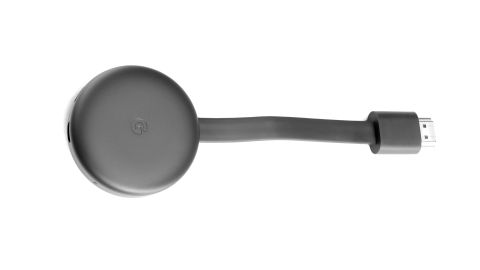 The new Chromecast is much like the old Chromecast, but that’s no bad thing

Did you know there’s a new Chromecast in town? There’s little reason why you should: Google didn’t even mention it at its October launch event.

Maybe it’s because the 2018 version of the video-streaming dongle is very similar to its 2015 predecessor. Slightly faster processing, support for 60fps and a new matte finish are pretty much the extent of it – at least until an update later in the year brings support for multi-room music.

Thrilling stuff, we’re sure you’ll agree, but Google didn’t really need to make too many changes to the Chromecast because it was already brilliant.

There’s nothing more hip than a soft-touch, matte finish, and that’s what the 2018 Chromecast sports, in either black or white – sorry, ‘charcoal’ or ‘chalk’.

The physical dimensions and general approach are the same, though, so this is a small disc that dangles from a short HDMI cable, with the power provided by a bundled microUSB cable. A wall plug is included, but if your TV has USB sockets, power from one of those should be sufficient.

Apart from the trailing USB cable, it’s an exceptionally attractive little device, but ultimately, neither of those things matter because once you’ve plugged the Chromecast in to the back of your TV, you probably won’t need to see it again.

The core approach of the Chromecast remains the same as ever: instead of controlling it directly using a remote control, you select a video, song or web page via your phone, tablet or computer and ‘cast’ it to your TV using the button that’s now built into a surprisingly large number of apps.

Netflix is compatible, as are BBC iPlayer, ITV Player, All4, My5 and even Now TV. Google’s own apps, such as Google Play Movies & TV and YouTube, are castable, as are music apps such as Spotify, Tidal and TuneIn. The big absentee is Amazon Video, but otherwise the list is more or less complete.

The lack of a traditional remote will be an issue for some, and we encountered some occasional unresponsiveness when attempting to control an already-playing video from an iPhone, but the communication between handheld device and Chromecast is mostly slick and reliable.

It’s worth remembering that while you’re choosing what to watch or listen to using your phone (or tablet or laptop), you’re not actually sending media from the device you’re touching. Instead, the Chromecast is streaming directly from the internet, improving data rates and therefore quality, and preserving the battery life of the casting device.

The Chromecast is also now part of Google’s Home family of products, which means you use the Google Home app on Android or iOS to set up the device and ascribe it to a specific room. It also means that you can play content on the Chromecast by issuing voice commands to any Google Assistant smart speakers you might already have, such as the Google Home Mini.

This feature is of limited use right now – currently only Netflix, All 4 and Spotify are compatible – but it is rather cool to be able to say “okay Google, play Ozark on the lounge TV” and have the Netflix TV show continue where you last left off.

Support for 60fps video doesn’t really add anything to regular TV and movie watching, so the picture performance of the new Chromecast is more or less identical to that of the 2015 model – which is no bad thing.

As before, 1080p is the upper resolution limit – the Chromecast Ultra (£69) goes up to 4K – but the picture is sharp and detailed, and boasts natural colours and a good deal of punch.

Blacks are a little all-consuming, so dark detail isn’t terribly strong, and there’s a little blur and judder to motion. Neither flaw is serious or particularly distracting, there’s just something a little computer-like about the delivery that you don’t get with more premium streamers.-

This isn’t a premium streamer, though: it’s a £30 streamer, and for that money the picture is very good indeed.

When plugged into a good soundbar or home cinema system (either directly or via your TV) the Chromecast will output sound at up to Dolby Digital Plus 5.1 with compatible apps and videos.

This is a punchy, clean and detailed delivery, with more than enough dynamic headroom for a dramatic movie set piece. Dialogue, meanwhile, is clear and fairly nuanced. We occasionally encounter lip-sync issues, particularly when playing from Netflix, but a brief pause and resume is all that’s needed to get the video and audio playing in harmony once again.

The Chromecast is a great product that’s clever on the engineering side but simple to use. Some might not like the lack of a physical remote, but that’s part and parcel of the Chromecast experience – and there are lots of options out there.

The new Chromecast does little that the previous model didn’t, so there’s no need to upgrade if you’ve already got one. But if you’re looking to make an older, dumb TV smart in a cost effective and innovative way, the new Chromecast is extremely easy to recommend.