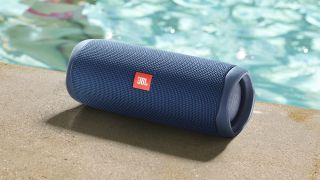 There's no shortage of Bluetooth speakers on the market, but not all are worthy of your precious cash. That's where we come in. We've picked out two cracking options – the JBL Flip 4 and its successor, the JBL Flip 5. Both of these wireless, waterproof wonders are perfectly portable and combine solid sonics with rugged designs. But, which is the best Bluetooth speaker for you?

Read on as we pit the JBL Flip 4 against the JBL Flip 5 in a head-to-head battle, comparing everything from performance and price, to features, connections, build quality, toughness and more.

Whether you're planning a beach BBQ, a garden party or just want a classy portable Bluetooth speaker that'll survive a splash, both of these JBLs speakers should be on your shortlist. There are some pros and cons to be aware of, though, so let's get stuck into the specs and see which is the best Bluetooth speaker for you....

Affordability-wise, the Flip 4 is the best Bluetooth speaker for those on a tight budget.

The Flip 5 has a larger capacity battery than the Flip 4 (4800mAh vs 3000mAh) so you might expect it to have a bit more stamina. Not so, both these speakers provide 12 hours playback.

What's more, the Flip 5 has a fast-charge USB-C port, meaning its battery will go from flat to full in just 2.5 hours. The Flip 4 takes around 3.5 hours to juice up.

In other words, when it comes to battery life the Flip 5 has the edge.

if you're planning a day at the pool or a trip to the beach, you can party on whatever the weather since both of these speakers are rated IPX7. That means you should be able to submerge them in water at a depth of 1m for up to 30 minutes. It also means they're dust-proof and can withstand the odd knock or drop.

But while both models are rugged enough to survive a weekend in the wild, only the Flip 5 actually floats in water, making it the better option for pool parties and boat trips.

Both score highly on the portability scale but if you like to travel light, it's worth nothing that Flip 4 is marginally smaller in size and also a bit lighter (515g vs 540g). Still, both speakers are easy enough to sling in a backpack or handbag without any fuss.

More conscious of style? The Flip 5 could be the best Bluetooth speaker for you – it comes in a choice of 11 bright colours whereas the Flip 4 comes in six. Fun fact: US customers can personalise their Flip 5 with text, stickers and images using JBL's Design Your Own customisation feature.

You might be surprised to discover that the newer JBL Flip 5 has fewer features than its predecessor, the Flip 4. Gone is the analogue aux input for wired listening, the noise-cancelling microphone for hands-free calls and voice assistant integration.

The Flip 4 also has two drivers for stereo sound, whereas the Flip 5 is a mono speaker. We'll cover how this impacts performance in the 'Sound Quality' section (below), but if stereo sound is important you, the Flip 4 might be the one to go for.

The more eagle-eyed buyer might also spot that the Flip 4 has a 'Connect+' button, whereas the Flip 5 boasts PartyBoost.

Connect+, as seen on the Flip 4, Charge 4, Xtreme 2 and a few older JBL Bluetooth speakers, means you can make compatible speakers play the same song simultaneously, or set one of them as the left channel and one as the right for a greater sense of scale.

PartyBoost, found on the Flip 5 and Pulse 4, performs the same trick. It's particularly useful as it means you can pair two mono Flip 5 speakers for stereo sound. You can also daisy-chain 100+ PartyBoost-compatible speakers to create an awesome wall of sound that would almost certainly earn you a visit from the local council.

What you can't do is pair the Flip 4 and Flip 5, since Connect+ speakers don't support PartyBoost speakers and vice-versa. So, if you already own a JBL Bluetooth speaker, it's worth opting for the Flip with the same JBL pairing protocol, else you won't be able to pair your new purchase with your existing JBL speaker.

When it comes to controls, the Flips keep it simple with rubberised buttons covering play/pause, volume adjustment and pairing. Both are compatible with the JBL Connect app, which, if fairly basic, and has no EQ setting adjustment.

So, the short version is that, despite being the older model, the Flip 4 boasts more features and connections. It also doubles a speakerphone, which the Flip 5 does not. But which Flip sounds better? We'll get to that next...

The Flip 5 might only have a single 44mm driver, but it has a better frequency response than the Flip 4 and outputs an extra 4W. The result? A louder, clearer, more agile sound that's packed with taut, pounding bass and plenty of mid-range sparkle. Not even the Award-winning Ultimate Ears Wonderboom 2 can match the Flip 5's openness and acoustics, although the Wonderboom is a tad cheaper.

The Flip 4 might have two drivers to the Flip 5's one, but it doesn't offer quite the same degree of sophistication as the Flip 5.

The good news is that the Flip 4 still sounds confident and agile. It serves up plenty of detail too, and the presentation is surprisingly spacious given its size. The bad news? It just lacks the dynamism and punch of its pricier sibling.

If your budget stretches and sound is a top priority, go for the Flip 5. It delivers a remarkably energetic performance that's hard to beat at this level.

This is far from a clear-cut choice, though. The JBL Flip 4 is arguably the more versatile travel buddy. It's lighter, doubles as a speakerphone and has a handy aux in.

It's also cheaper, and if you already own one of JBL's Connect or Connect+ speakers, it's the obvious choice in terms of backwards compatibility.

So while the Flip 4 might not be the best Bluetooth speaker when it comes to pure sound quality, it's still a fantastic buy for the money.