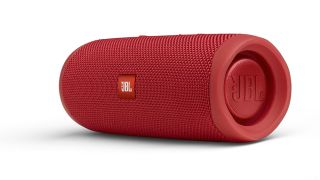 JBL makes some of the best Bluetooth speakers around. And the Charge 4 and Flip 5 are two of its best.

They're both affordable, great-sounding speakers that are built to last. Not only will they survive being tossed in a bag and carted around, they'll also withstand the elements, as they're built for life outdoors. Perfect for that camping trip or day at the beach.

But which is right for you? We awarded both the JBL Charge 4 and JBL Flip 5 five stars, so whichever you choose, you're guaranteed great performance. But there are some differences between them. While quite subtle, these differences will make all the difference if you're using the speaker day in, day out.

So let's run down all the key features and see which JBL speaker comes out on top.

Not a massive discount, but it's money off all the same. And a very good price for one of the best Bluetooth speakers around.

Battery life can make or break a Bluetooth speaker. Because they're wireless, they free you from the shackles of being plugged in, either to a mains plug, or the device you're playing music from. But if the battery conks out, you'll need a mains socket, or at best a portable power bank, pronto.

The Flip 5 gives you 12 hours of run time from a single charge, and thanks to its USB-C port, will take just 2.5 hours to juice up from empty to full.

But that is beaten comfortably by the Charge 4. As its name suggests, battery is one of its strong suits. On a full charge, it provides a mammoth 20 hours of run time. That's enough for even the hardiest of pool partiers.

Both the Flip 5 and Charge 4 are IPX7 rated, which means they're waterproof in up to 1m of water for up to 30 minutes. But the Charge 4 has a cover for its charging port, which adds extra protection.

Both are chunky and solidly built, but still portable enough to sling in a bag.

If you are on the move, it's maybe worth noting the quite sizeable weight difference. The Charge 4 weighs 960g, while the Flip 5 tips the scales at just 540g. So for those on the go, the latter might be the better choice. Both speakers are at their best laid horizontally, as they have bass radiators at each end.

For its extra portability, the Flip 5 just takes this round.

Both speakers have a mode called PartyBoost, which lets you connect two compatible speakers together to play in stereo, or to link up to 100 to create one heck of a sound.

The Charge 4 also has a rather massive ace up its sleeve: it can charge your phone. Thanks to its humungous battery, it not only has a mammoth run time, it can also charge your phone, tablet, or anything that juices up via USB from a 5V supply. Which makes it ideal for days and nights away from civilisation.

But in essence, these are pretty stripped-back speakers. They don't have wi-fi, native support for voice assistants, and the app is pretty basic. Nothing wrong with that, of course. We're all for simple products that do one thing and do it well.

Pairing with both is an absolute doddle, and the Bluetooth connection remains stable throughout our testing.

The Flip 5 is first up, and puts in an impressive performance. Bass is weighty – especially for such a small speaker – and there's plenty of texture to the audio. The treble and midrange also impress, with the soundstage being very open and spacious. It beats the Award-winning competition, which is all we need to say.

The Charge 4 also provides excellent sound. It's not as bass-heavy as you might expect, given its weight, but the low end is certainly ample. And that lets you pay greater attention to the mids and treble.

The JBL Charge 4 can deliver beats with convincing punch, but like every speaker this size, there is a limit to its bass floor. It can’t deliver real sub-bass, but in the context of most pop songs it gets close enough to satisfy.

But at high volume, the strain starts to show a little. With certain tracks, the proportion of bass is reduced and the upper-mids take on a harder tone. Its single forward-facing active driver also makes sure there’s a definite, if acceptably wide, listening sweet spot. This is not a 360-degree speaker, so its placement matters.

It was always going to be close, pitting two of the best Bluetooth speakers head to head. But we didn't know it would be this close.

The Flip 5 just pips it three to two. Its superior sound, greater portability and more affordable price give it the edge in our book.

But the Charge 4 is still a great speaker. Its mammoth battery gives you nearly a day's run time, and it can charge your phone when you're away from home, which could be a dealbreaker for the campers among us.