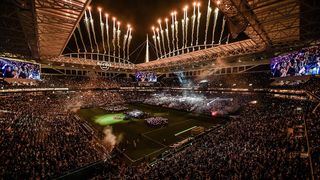 Super Bowl 2020 is upon us. You’ve invited all of your mates over and you’ve stocked up on hot dogs, nachos and Bud Light. You’re almost ready to go, but if you really want to turn your front room into the Hard Rock Stadium, then you'll need to make sure your TV is calibrated for the best Super Bowl TV settings.

Your TV is stacked with preset modes for picture and sound, and it's important to start in the right place to get the most from your set. Of course, there are all sorts of different models out there but here's a few rules of thumb to set you off in the right direction and make sure you've got a performance to be proud of by the time of the Super Bowl 2020 kick-off.

Got a 4K TV? Of course you have. For the first time ever, the Super Bowl will be broadcast live in 4K HDR using the HLG standard. So make sure you're watching it that way.

You can access the 4K footage from the NFL on Fox channel over-the-air, FOXSports.com or the Fox Sports apps for free if you're in the States. If you're away from the States on business or holiday, then you'll need to download a VPN.

Those in America can watch the 4K HDR coverage on Fox through third-party devices such as Roku and Amazon Fire TV 4K. Apple TV brings access to the 4K resolution but only in SDR. Get your order in for delivery before Sunday.

You don’t need special TV settings to make the Battle of the Pigskin look its best if your TV is properly set up in the first place. That’s because your TV should be tweaked to make everything look as natural and authentic as possible, whether it’s a Blu-ray movie, Netflix Original TV series, Homes Under the Hammer or, yes, sport.

If the goal is to feel as if you’re in the stadium, you want the image on your screen to match reality as closely as possible. Generally speaking, that means avoiding your TV’s dedicated Sport mode. For reasons known only to the manufacturers, these tend to pump up brightness and colour to obscene degrees.

Yes, you want the gold of the 49ers to sparkle under the floodlights, but you don’t want to be blinded by it. What's more, pushing the colours and the brightness can blow out all the subtlety of the rest of the picture.

Instead, stick with the mode you use for the rest of your viewing. If it looks good with everything else you watch, it will look good for the Super Bowl. If you’ve never tweaked your TV’s picture settings, here’s how to set up your TV and get the best picture.

One quick tip, though: the very first thing you should do when attempting to get the best possible picture from your TV is to switch off the ‘Eco’ settings. These severely limit the light output from your TV and it will never perform as it should with them enabled.

There is, however, one potential exception to the rule that your general settings will also work best for the Super Bowl, and that’s the motion processing.

Motion processing is always a controversial subject as personal taste plays such a big part. We’ve produced a general guide to motion processing, but it is true that the setting you use for movies might struggle in the face of the unique challenge posed by the NFL. Those long, high throws are a particular nightmare, as the TV struggles to distinguish the fast-moving ball from the crowd behind it.

Increasing the amount of motion processing can help, but it can also make things worse and will often make the players look like cut-outs. The only solution is to test your TV’s motion settings specifically with NFL and try to find a balance that works best for you.

Luckily, doing so is very straightforward as highlights from the playoff games are readily available. What better way to get your juices flowing for the Super Bowl than catching a re-run of the 49ers smashing the Packers in the play-offs?

Your TV will most likely come with a list of audio presets almost as long as the picture modes. There will be one or two special sound modes that are worth exploring too.

The tricky part is that the quality of these modes and presets varies from TV to TV, so it's going to involve a little experimentation on your part. In general, what you're looking to do is increase the sound field of your TV's speakers to give you as immersive a feel as possible.

Speaker virtualiser modes are particularly good for this. They process the sound to make it appear as if there are more cinema channels than there actually are. These might come in the form of a Dolby Atmos virtualiser designed to add height to proceedings, as well as more common virtualisers that attempt to stretch the sound around the room. This is often what your TV will do for itself if you switch to a Stadium or Sport preset or even an AI mode.

The downside is that this processing can thin the sound out a bit in terms of both weight and dynamics. You may find that the music of the half-time show lacks body and that those big, bone crunching hits come off a little limp. If that's the case, you might be better trading off the immersive sound of the crowd instead. Either try switching to a normal or cinema sound mode or possibly giving any bass enhancement mode a quick spin. Better still, go and grab yourself one of our recommended best soundbars.

The best advice universally for Super Bowl sound is to make sure you've got any speech or dialogue clarity modes switched off - something you may like to use for your normal TV watching. Again, these can thin out the audio and it's not like you need to hang on the every word of the commentators.

Whatever you choose, make sure you do all your testing before your guests come round. They won't be too impressed if you're playing the menus while they want to be watching the game. That's the kind of blocking at the Super Bowl that no one wants to see.