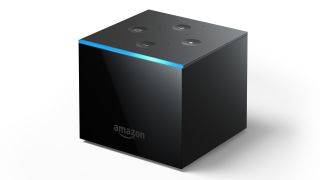 Both are small enough to fit in the palm of your hand – yet powerful enough to deliver 4K HDR content.

At a glance, the most obvious difference between these two top-notch boxes is the price: Apple TV 4K is currently a hefty £70 / $59 more than the Amazon Fire TV Cube.

It's unlikely price will be the only factor in your decision, though. Both boxes also offer voice controls and streaming apps designed to add value to your smart TV.

So, should you splash out the extra on the Apple TV 4K? Or would Amazon's Fire TV Cube save you money and sate your streaming appetite? Let the battle of the high-quality video streamers commence!

Both devices are a cinch to set-up and very straightforward to use. The Apple TV's menus are arguably a little less snazzy, but its big, clear icons make for a particularly intuitive user experience.

The big difference, though, is in the voice control. The Apple TV 4K uses Siri, while the Amazon Fire TV Cube is obviously an Alexa device. While actively using each streamer there's little significant difference in what you can do with each of these: find films, pause video, ask trivia question and control any smart home devices with your voice.

But the Fire TV Cube sets itself apart in two ways. Firstly, as well as being a video streamer it also works as an Echo device, so even when the TV is off you can use it as a smart speaker.

Secondly, thanks to an IR transmitter and excellent database of devices, the Fire TV Cube can control your entire AV system, turning on your TV and soundbar, changing channels and volume, switching inputs, etc, all via voice command. It's an unexpected and impressively effective feature.

Of course, each device also comes with a physical remote, and Amazon comes out on top here, too, with a controller that's a little less cool and classy but ultimately more ergonomic and with a more useful selection of buttons.

Both streamers carry Netflix and Amazon Prime Video in 4K and HDR, right up to Dolby Vision where available. Both boxes also pack in the UK's major TV catch-up apps: BBC iPlayer, All 4, ITV Player and My5.

Look a little more closely, however, and you'll find some differences that won't matter to everyone but will matter to some people a lot.

It's too early to tell whether Apple's TV+ service is worth subscribing to, but the standard Apple TV app is brilliant for offering pay-as-you-go access to 4K HDR films, so its absence on the Fire TV Cube is a shame, particularly as the cheaper Fire TV Stick 4K does already have it. We're assured it will arrive on the Cube soon, though.

Now TV is another differentiator, as the Apple TV has it but Amazon Fire TV Cube does not, and that will be a big deal for those who want access to exclusive Sky content, most notably live Premier League football, without a full Sky subscription. It's the same case with the BT Sport app: the Apple device has it, the Amazon box does not.

While we expect you're looking at a video streamer primarily for video, you might still be interested in the selection of music apps that it has, particularly if you're connecting it to a decent sound system. If that's the case, both of these devices will see you happy as they both offer Spotify, Tidal, Amazon Music and Deezer. The Apple TV 4K also adds Apple Music, of course.

Video streaming has come on leaps and bounds in the last few years, but some of the cheaper devices still have a blocky, computer-like quality to the picture they produce. Thankfully that's not the case with either of these devices.

The Fire TV Cube offers HDR in HDR10, HLG, HDR10+ and Dolby Vision formats. The Apple TV 4K, by comparison, doesn’t support HDR10+. Right now, that’s not a big deal as there’s not too much HDR10+ content to get excited about, but it could be a consideration in future.

Amazon has done a fine job, but the Apple 4K TV is the better performer.

In stereo, the Fire TV Cube’s audio offers a punchy and attacking delivery that the Apple TV 4K can’t match. There’s a level of detail and crispness that grabs the attention.

Switch to a film and the Cube's taut approach once again impresses. But while the Cube is among the best streamers out there in terms of clarity, the Apple TV 4K offers a touch more comparative richness and weight.

Put simply, the Fire TV Cube sounds excellent in isolation but its effects are a little isolated from one another. Its polished rival sounds that bit more coherent.

With Alexa voice control of your home cinema system, the Fire TV Cube is a superb video streamer and undeniably awesome value for money.

But, ultimately, the Apple TV 4K offers an even picture performance and an exclusive catalogue of 4K HDR content that continues to expand at an impressive rate.

If you want to save a bit of money and like the sound of the Fire TV Cube's extra smarts, there's nothing at all wrong with going the Amazon route, but that extra-special performance means Apple's streamer does justify the extra spend.