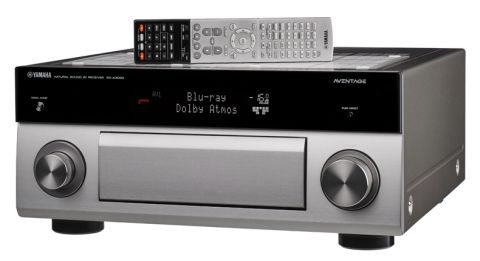 Its budget and premium models can often be seen battling it out with rival amps from Denon and Pioneer, with the company often there or thereabouts in the final reckoning.

But already this year, one Yamaha receiver has impressed us in the shape of the five-star, entry-level RX-V581. Will the Yamaha RX-A3060, from higher up the range, prove equally impressive?

Yamaha’s Aventage AV receivers are billed as the high-performance members of the family and their premium status is evident straight out of the box.

Free the Yamaha RX-A3060 from its polystyrene shackles and the amp’s 18kg body gives you a decent workout – the amp’s chassis, legs and frame have been strengthened.

It also features Yamaha’s ART (anti-resonance technology) that takes the form of an extra fifth foot on the bottom of the amp, which Yamaha claims minimises the impact of vibrations on sound quality.

The look and the feel of the Yamaha RX-A3060 are all befitting a higher class of amp too. The smooth, clean lines of the Yamaha’s aluminium front panel give it a graceful, but not too industrial, look.

The RX-A3060’s clean-shaven appearance is made possible thanks to a solid aluminium panel in the middle. Push its bottom edge and it drops down like a drawbridge, giving you access to additional controls and inputs.

They include an Apple-compatible USB socket, headphone jack and an extra HDMI input, handy if you want to hook up an external source like a digital camera.

Both input and volume dials feel solid, and the way the speed at which the volume rises or falls depending on the vigour of your twisting just adds to the user appeal.

With the RX-A3060 there are two different finishes to choose from. Our review sample is in the titanium finish, but if you’d prefer something a bit more discrete, a more traditional black version is available.

The only thing that lets the side down is the supplied remote control. It looks and feels like the kind of wand you’d get with a budget receiver, not a £2000 model.

It’s also a little cluttered, while the absence of a backlight will leave you fumbling around in the dark as you try to operate it.

As you’d probably expect at this price, the Yamaha RX-A3060 wants for little. It’s a nine-channel amp, with all the processing on board required to handle multiple zones of audio and multiple flavours of surround sound.

Dolby Atmos (in 7.1.2 and 5.1.4 guise) and DTS:X are both covered. Yamaha even has its own surround processing mode called Cinema DSP HD3 which you can apply to these object-based surround modes or a traditional 5.1 or 7.1 speaker set up for a more spatial sound.

Wi-fi and ethernet are present, which helps turn the Yamaha into a hub for any streamed music in your house. AirPlay, Bluetooth and DLNA let you stream from smartphones, laptops and NAS devices.

Not only can the RX-A3060 receive audio via Bluetooth, it can transmit audio to a Bluetooth speaker or a pair of headphones.

This functionality is part of Yamaha’s MusicCast multi-room system, which lets you stream content from and to other Yamaha kit using the MusicCast Controller app.

Yamaha also provides native support for Qobuz, which is good news for subscribers of the CD-quality streaming service. Spotify Connect, Napster and vTuner internet radio are built-in too.

If the RX-A3060 is also going to double as your stereo amp, you can also connect a moving magnet phono stage.

One thing you can expect at this level is plenty of inputs and here the Yamaha delivers. It has eight HDMI inputs, while a couple of HDMI outputs allow the amp to beam pictures to a second screen.

All HDMI connections are capable of Ultra HD 4K/60p and HDR pass-through. They are also HDCP 2.2 certified so there’ll be no handshake issues should you want to connect a 4K Blu-ray player.

Being a premium amp, the Yamaha can also upscale any video to 4K resolution. We’d experiment using the upscaling in the amp versus the upscaling in your 4K display, just to see if you can notice any dramatic differences.

Yamaha includes its trusty YPAO calibration system and mic, which takes multiple measurements of your speakers from different positions to get the best set-up for your room.

Using the supplied stand, the amp can also measure speaker height and angle. It’s a thorough and extremely accurate system. It’s also one of the quickest out there, even when it’s measuring multiple listening positions.

We’d always recommend going back into the settings to check all the measurements, but in the Yamaha’s case, we’d also turn off YPAO Volume and Adaptive DRC, which can impact sound quality.

Although the supplied remote isn’t much to shout about, Yamaha’s accompanying control apps are more successful.

You can control the amp’s basic functions through the MusicCast Controller app for iOS and Android, or to gain in-depth access to the settings you can download Yamaha’s AV Controller app.

It wouldn’t be a Yamaha surround amp without a wealth of processing modes to choose from, and sure enough the RX-A3060 doesn’t disappoint.

From sci-fi to sports, a church to the theatre, you can tweak the Yamaha’s sound to match the type of content or it can transport you and your sofa to a completely different location.

But to hear this amp at its best, you need to engage its Pure Audio setting, which switches off all unnecessary circuitry.

Find a particularly fast-paced soundtrack, such as The Wolverine, and the difference between it turned on and off is startling. The RX-A3060 sounds clearer, more detailed and even more dynamic.

The RX-A3060 is a wonderfully talented amp and even during the brief 20th Century Fox opening sequence it manages to give you a small taste of its dynamic prowess.

The opening chapter of the film flashes back to Nagasaki, moments before the atomic bomb is dropped. The scene is high on tension and detail, and the Yamaha laps it all up.

First there’s the feint, high-pitched whistle of the bomb hurtling towards the ground.

There’s an eerie moment of silence before the Yamaha hits its target and delivers two gut-wrenching explosions, followed by a wave of damage and destruction, which surges towards the prisoner of war camp.

As Wolverine tries to shield the Japanese soldier from the carnage, the sound of flying debris is punctuated by a couple of short, sharp bursts of silence.

Thanks to the Yamaha’s dynamism and control, it manages to balance it all perfectly. The quiet moments have just as much impact as the earth-shattering explosion.

When Wolverine’s battling the Yakuza henchmen on the high-speed train, lesser amps could sound brash and bright when faced with all the crashing and slashing. As metal and adamantium collide, the Yamaha manages to tread a very fine line.

Dialogue comes through loud and clear too, whether it’s Wolverine’s grizzly bark or Mirako’s more gentle tone. The Yamaha captures the emotion and detail in voices extremely well.

The same can be said with music too. Play Michael Jackson’s The Way You Make Me Feel over Spotify Connect or as a CD-quality stream and the track’s beat sounds powerful and solid, but never overpowered or too intense.

It still manages to capture the relatively fun, easy-going nature of the track.

There’s no shortage of budget home cinema amps on the market, but if you want to go up a level or three, and if your speaker package is up to the job, it’s easy to make a case for the Yamaha RX-A3060.

At £2000 it isn’t cheap, but then surround-sound of this quality never is.