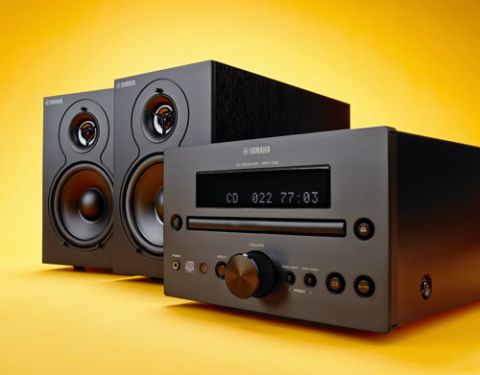 A really enjoyable compact system on the whole, but its occasionally harsh treble raises questions of living with it long term

The Yamaha MCR-232 micro system might not be the newest kid on the block – you only have to look at its old Apple 30-pin dock and lack of wireless to see that – but what it lacks in the latest features, it makes up for with its likeable sound and affordable price.

Despite its small stature, in terms of scale the Yamaha more than holds its own against some of the beefier systems around for this money.

We start with The Eagles’ No More Walks in the Wood, and the sublime harmonies of the track fill our testing room with a surprising amount of space and airiness.

It’s a well-balanced listen for the most part too, and despite that subwoofer output we don’t find ourselves immediately wanting more from the low-end.

The punching bassline in Eminem’s Say What You Say is reproduced with control and agility, and while it might not reach as low into the bass as rivals, it has much more attack to it, easily keeping up with the midrange, which is also particularly well handled.

Vocals are clear and Adele’s soulful voice in Rolling in the Deep shows stacks of detail and emotion. Dynamically it’s strong too, and is adept at following the ebb and flow of a recording, making it an exciting listen.

We would still say it falls behind the likes of the Denon D-M39DAB for rhythmic timing and dynamic handling, though. It’s good, but it’s not Award-winning.

However its biggest downfall comes from the treble. With a fairly hard-edged recording like Rolling in the Deep, the top-end can easily tip from bright to harsh, particularly at higher volumes.

Listen to smoother recordings at a more ear-friendly level and it’s not quite as irksome – but over time it’s a quality that we fear could well become tiring.

As such, when you’re using the digital inputs, you should always use as high-quality recordings as possible in order not to trouble the treble any more than is necessary – we’d recommend 320kbps or better where possible.

The Yamaha MCR-232 is a dinky little system. It consists of a compact main unit and small accompanying speakers, which stand much shorter than any of its immediate rivals.

They also go back further too, matching the depth of the CD unit, which is something worth considering if you’re thinking of sitting this system on a bookshelf.

Inside these two-way bass-reflex speakers you’ll find 11cm woofer units and 25mm dome tweeters, with screw terminals between them and the receiver for a superior connection. There’s also a subwoofer output and an 3.5mm input for laptops or non-Apple portables.

Apple devices are served by the USB port and built-in dock. The latter is compatible with the iPhone 4s and below, and any 30-pin iPod. Owners of Lightning-equipped Apple kit will need an adapter – but should note that there might be compatibility problems with iOS 7.

While the 30-pin dock does make the system look a little long in the tooth aesthetically, the USB input helps to put this right by allowing for a musical connection with any Apple device, including iPads, as well as WAV, MP3 and WMA playback from any USB stick.

There’s no wireless Bluetooth or AirPlay though, so wires will be needed for digital playback.

DAB radio is also present and correct, including DAB+ for non-UK countries, and the speakers and receiver come in four finishes, with a choice of silver or black receiver and black or brown speakers.

Overall the Yamaha MCR-232 produces an enjoyable sound that gets your toes tapping for a reasonable price (even less than the £300 quoted here if you check out the latest prices).

Spend that little bit longer with it, though, and there are some things that we think could become annoying enough in the long term that we’ve had to dock it a star from the full five.