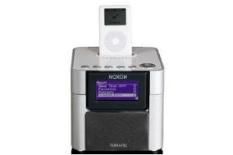 A real jack-of-all-trades, but it doesn’t sound perfect

This is one of the most expensive internet radios around, but it does sport an iPod dock. Having said that, the Noxon 2 should only really be considered by people interested in a system as opposed to just an internet radio.

It offers a detailed, balanced sound that, while much better than the majority of its rivals, still isn't as big as it should be considering the price tag. If you want to wake up to your iPod or Icelandic rock, give it a try.