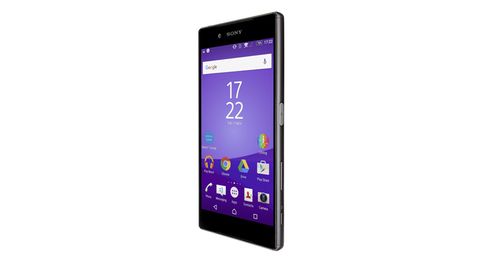 A solid flagship smartphone, but not the innovator we hoped for

If you’re now thinking ‘what about the Z4?’ don’t worry you didn’t sleep through it. While most of the world got the Z3+ to replace the Z3, in Sony’s native Japan it was officially called the Z4. Head-scratching, yes, but technically Sony is conforming to the sequential running order with the arrival of its new flagship smartphone: the Z5.

It slots neatly between the Z5 Compact (a smaller version) and Z5 Premium (a larger model with the world’s first with a 4K display).

A little over a year ago, the Z3 stole our hearts as well as a place on the Awards podium.

The Z3+ only served relatively minor spec upgrades and it was crippled with overheating issues, so many will consider the made-for-but-not-in-Bond Z5 as Sony’s ‘next big thing’. And it has clown shoes to fill.

Despite the Z3+ shedding weight and shaving millimetres over the Z3, Sony has taken a step back. The Z5 matches the Z3’s one-hand-friendly dimensions: 146mm tall, 72mm wide and 7.3mm thick. But don’t be fooled, the two are hardly dead ringers.

For one, the Z5 straightens up, dropping its predecessor’s curves in favour of the flatter, more angular styling of Sony’s heritage ‘Z’ handsets – apparently not for old times’ sake, but to better accommodate a finger-scanner button on the right- side.

A frosted-glass back panel replaces the clear glass one too, so using shirtsleeves to wipe off grubby fingermarks every hour won’t be necessary. It’s not just more practical but looks and feels lovely too.

It’s just a shame it’s framed by a sharp ridge. It doesn’t exactly draw blood, but it feels uncomfortable in our palm, and for that we actually find the Z3 the nicer phone to hold.

Sony says a lot of thought has gone into its fingerprint scanner, a small button that is slimmer than those on the likes of the Samsung Galaxy S6 and the iPhone 6.

It doubles as the power button and aside from being kind of cool, works remarkably well.

It’s exactly where your thumb naturally rests – if you’re right-handed, anyway. Lefties will most likely want to use their middle finger although it’s a little trickier to make sure it’s straight enough to be read.

Set-up requires tapping (or ‘registering’) your selected digit a number of times – a rather patronising ‘Doing great! Keep it up!’ eggs you on all the way – and you can register more fingerprints.

It’s not compulsory either; if you want to check the time without picking it up from your desk, the double-tap wake-up and pin method is on hand.

With volume rocker and camera snapper buttons sitting just below, it does look and feel upside down. It’s not easy to change volume without changing grip so we feel it needs to be higher on the frame.

The waterproof micro-USB charging port we first saw on the Z4 tablet returns, however the microSD slot is still covered by a waterproof flap and wouldn’t survive a dunk in the bath without it in place.

The Z5 is the first Xperia to support microSD cards up to 200GB (the Z3’s limit was 128GB), which should please the happiest of snappers and most hardcore of hi-res music collectors.

You might not need one though: 32GB internal memory is up from 16GB in the Z3.

Overheating issues cursed the Z3+ so we’re surprised to see Sony has gone with the same 64-bit octa-core Snapdragon 810 processor (with 3GB RAM). While the Z5 is better at keeping its cool, the problem isn’t entirely solved.

It takes only a few minutes of gaming to raise suspicions of it running warm, and ten to confirm them. It’s more unpleasant than too hot to handle, but it’s less than ideal.

We can’t fault its operation elsewhere, though. It’s a faster mover than the Z3 and really flies through tasks, whether that’s loading the camera app or a third-party one.

Despite taking a slight hit on battery capacity over the Z3+ (it’s 2900mAh as opposed to 2930mAh), the Z5 still claims a two-day battery life. We find it gets us roughly a day and a half of general use with wi-fi on.

We can largely vouch for the Stamina and Ultra Stamina modes, which restrict usage to core apps (calls, messages, camera, calendar etc) and is perfect for festivals; with the latter activated, 28 per cent gets us around 32 hours of scarce basic use with screen brightness on maximum (which apparently eats into the battery).

Wireless charging has been left on the shelf, although the additional Quick Charge (UCH10) plug (around £20) sounds like a good charging accessory if it does what it claims: namely 5.5 hours use from a 10-minute charge, or a whole day from a 45-minute charge.

Android Lollipop (5.1.1) comes pre-loaded, and although no official timeline has been confirmed, it is set to get the Marshmallow 6.0 update. We’re glad to see Sony has toned down its skin; there’s the usual Sony phone bloatware here – Xperia Lounge, What’s New and Playstation apps are present in the menus – but we’re glad to see it has been stripped back.

In this respect, less is certainly more.

While the Z5 Premium packs a 4K display (the smartphone world’s first, in fact), the Z5 sticks with its predecessor’s 5.2in Full HD TRILUMINOUS display, with 428ppi. It’s a bit disappointing considering that in resolution terms it trails the LG G4 and Samsung Galaxy S6 on paper.

And it shows. Both prove a touch sharper, even if it’s only noticeable when sitting them side-by-side. More obvious is their higher, more desirable brightness levels.

Still, the Z5’s picture is bright enough in most circumstances – clear and clean too. And as long as the X-Reality picture engine isn’t on to big-up colours, it has a nicely grounded palette that makes BBC iPlayer streams and MP4 videos look realistic.

Although the Z3 is actually slightly more insightful, the Z5 responds with richer, more nuanced colours. Whites are purer too.

Blacks break even, although the Samsung’s AMOLED display easily takes it for depth, making blacks look more dark blue on the Z5.

Sony claims its new flagship is its best camera phone yet, and we have to agree. After sticking to 20.7MP in every smartphone since the Z1, Sony has upped the pixels this time to 23MP – that’s compatible with snaps taken in 4:3 ratio; in 16:9 (ie. fullscreen), it peaks at 20MP.

We can’t count that fast but we do know that it’s seriously quick – both when touching the screen to focus (a selection circle pops up to help) and using the snapper button.

We take photos with slight hand movement, as if trying to quickly snap a celeb walking by, and the result was more stable and reliable than other phones we tried.

Generally, the results are impressive: photos are some of the sharpest we’ve seen, and up to scratch when it comes to detail and depth. The LG G4 is a little better at subtlety, though.

Colours are pleasingly accurate too, though a little on the rich side, and brightness levels are good. Zoom goes up to 5x now, and we’re pleased with the clarity on offer (although keeping the phone dead still when snapping is imperative).

Elsewhere, there’s the wide-angled 5MP front camera seen on the Z3+ (up from the Z3’s 2MP), as well as 4K recording.

It’s no surprise that the Z5 keeps hi-res audio support onboard, nor its signature sonic character that we know and love. Except this time the experience is even more refined.

Essentially, things are that bit clearer, meatier and more precise, most notably at the low-end.

The guitar riffs opening to Muse’s Supremacy have more punch and wrecking-ball power than through the Z3, and drum slaps are more skintight.

More weight has taken away the slight leanness of the Z3’s presentation too, and instruments and vocals alike sound clearer, as if they’ve been lassoed closer towards your ears.

Spaciousness hasn’t been compromised to get that either; it remains a nicely open listen.

You still get a good sense of drive and enthusiasm – Daft Punk’s Get Lucky has all the pop and fizz as it should have, and then some – and rhythmically the Z5 is in step.

Its dynamic prowess does a good job informing you that each piano key in the band’s Within is struck at a different intensity too.

In some ways, the Z5 feels like a revised Oxford dictionary. The language and layout is the same, simply more words have been added. Sony has largely stuck to the same Xperia Z script – the Z5 feels like a kind of mash up of the Z3 and Z3+ – and in terms of operational speed, camera and sound quality improvements have been made.

But we don’t feel as though Sony has moved things on enough since the Z3, especially when in some areas (namely picture quality and design) it arguably hasn’t moved on at all.

Has Sony run out of ideas? We hope not.