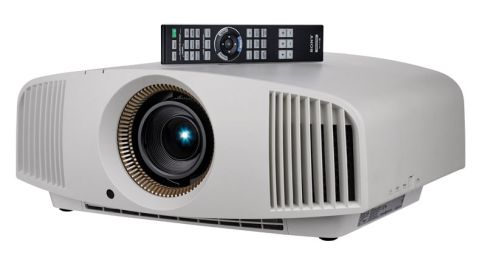 Following the Award-winning success of Sony’s debut 4K HDR projector (the VPL-VW520ES), Sony’s sophomore spec-savvy model could only walk in greater footsteps if it travelled to Bath and took the Jane Austen tour.

While the rest of the AV world is still readying their first native 4K projectors (though JVC has now launched its debut £35,000 model), Sony has supplied the market with a fair few over the last year or so – all high-end, all highly commendable.

As if the competition didn’t already have to play catch-up to keep up with the brand’s 4K projector output, it’s now also got to contend with its HDR inclusivity.

The VPL-VW550ES is more a replacement in the Sony projector line-up than an addition, with the VPL-VW520ES now being filtered out for this newer model.

While the VW550ES is still a great hulk of a projector, and sticks with its predecessor’s 1800 lumens of brightness and 6000 hour lamp life, it marginally ups contrast ratio to 350,000:1 and now both HDMI 2.0 inputs (which join LAN, PC and USB inputs) are compatible with HDCP 2.2 to allow passthrough of a 4K and HDR signal.

Delivering the 4096 x 2160 resolution is Sony’s SXRD projector technology, which has been a fixture in their models for over a decade.

SXRD is a hybrid of DLP and LCD projectors’ methods, and works by lamp light shining onto a reflective mirrored surface topped by a layer of liquid crystal, which twists to let the required light for the picture through it.

While not quite the pop-up tent equivalent of a projector, this Sony comes close.

Plonk its 14kg on a sturdy shelf and set-up simply requires spending a few minutes with the supplied remote. With the focus, zoom and shift lens all powered, they’re controlled by three separate, and thankfully responsive, buttons.

It’s much more straightforward than twiddling old-school dials, although the lack of tactility feels a bit like cheating. Still, if you’re all for making life easier for yourself, the Sony’s methods can’t be faulted.

For those looking for their next 4K fix, we recommend Netflix’s Tale of Light, which, as we load the streaming service via Sony’s 4K server, grabs our undivided attention – partly down to the accomplishments of the videographers, but mostly due to the projector’s delivery of them.

Like its predecessor, the VW550ES fills our 96in screen with a sharpness and percipience that has you thinking twice about leaving the room without pausing.

As we get up close and (almost too) personal to Alaskan grizzlies frolicking in the rivers, the picture basks in the texture and fine detail that gives their shaggy coats an almost unnerving tangibility.

The Sony proves equally sagacious with mountain gorillas’ wrinkled faces and mossy trees in the forests of Uganda.

Even with streaming – innately not quite as clean or stable as the Ultra HD Blu-ray disc format – the Sony’s 4K performance is clearly head, if not shoulders, above the best Full HD projector pictures.

‘Cinema Film 1’ is our preferred picture mode of the eight available within the menu, although ultimately we’d plump for ‘User’ where you have most control over tweaking individual picture settings.

We find the Sony’s contrast most natural without additional processing, although despite the picture being pleasingly steady in the Sony’s default pose, we would make use of Motionflow mode – especially when playing Full HD material; acting like a blast of hairspray, and making things just a bit more stable.

While in every other way the Sony is an irrefutable showboat, its colour palette is, to its credit, more focused on realism and accuracy than eye-catching saturation.

That’s not to say it can’t pop with colour when the material is there for it to; the thick red and yellow face paint and elaborately colourful costumes of a Papua New Guinean tribe come through with reliable solidity and stunning richness.

Nature remains the theme of our testing as we move to the Life of Pi Ultra HD Blu-ray where, with the disc’s HDR and extra shrewdness added into the equation, the Sony grabs the opportunity to perform at the top of its game.

There’s an even more Dulux approach to the colour palette in its wide range and subtlety, from skin tones to snake skin. Eyes flit to places they perhaps wouldn’t normally: the shimmer of the sea, the shine off wet animals' coats, and the glistening of fish scales.

The fact that varying intensities of sunlight reflects off shirts is discernible, as is even the subtlest wear and tear on the boat.

HDR isn’t just about more colour nuance, but widening the parameters for brightness and darkness too.

1800 lumens is by no means spellbindingly bright in projector terms, and blacks are of a good LCD TV level rather than OLED, however the Sony never feels lacking at either end of the spectrum.

The zebra’s black stripes are severe, and as night falls, jellyfish glow fervently through the water.

Even when presented with the task of upscaling standard Blu-ray, colour balance and fine detail remain the Sony’s main concern to the point where they rub shoulders with very decent HD projector performances.

As we put on The Lady in the Van on DVD, the Sony is mostly successful in its dogged determination to rid standard-definition pictures of blur and softness, kinder to viewers than Maggie Smith’s face in the process.

No miracle worker, it has no choice but to let some noise and softness creep in – after all, some serious upscaling goes behind the scenes here – but we find it more than watchable.

As picture technology advances, there’s no question that projectors are now more closely aligned with their panel counterparts.

Of course, you still have to pay full whack to have the latest tech on a projector, and the choice of models is somewhat limited, compared to the highly-competitive market for televisions.

However, when there’s a projector as good as the Sony VPL-VW550ES, who needs to make a choice?