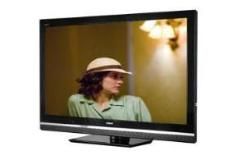 In many ways, the ’V5500 is a most impressive set; but it’s also the most disappointing

Few people could complain about the effort Sony puts into its TVs. While many manufacturers can be accused of introducing little in the way of performance improvements, the big S has been busy pushing the envelope with LCDs that offer astonishing detail, sharpness, motion processing, punch and black depth.

These are all qualities the 'V5500 has; which makes it frustrating that it's let down by dodgy backlighting.

Quite simply, no other TVs do justice to Blu-ray like the new Sonys do.

Play The Chronicles of Narnia: Prince Caspian and, when the 'heroes' get transported to Narnia, this set rewards you with a sumptuous and vivid rendering of the fantastical paradise.

Sunlight gleams and sparkles off the perfect blue sea, and there's all the definition and detail needed to dig up the deformations of the craggy rock formations and ruined palace.

Motion throughout is not quite as rock solid as the 100Hz Motionflow of the KDL-52W5500, but it's impressive enough to make us wonder whether the feature is worth the extra cash.

Great pic, but poor backlighting
It's when the action switches to the darker scenes, though, that the dodgy backlighting becomes a problem. There are spots of light emanating from all four corners of the set, particularly top-right, and this encroaches on the picture.

A completely dark screen proves that this backlight unevenness spreads, more mildly, to more central areas of the screen, and that is truly unacceptable from a modern telly.

Is it simply a fault with this review sample? Given that other Sony's suffer similarly, as did the KDL-40W5500 tested in May, we're inclined to think not.

There's just a touch of shimmer at the edges of the characters on the Hot Rod DVD, but such is the level of insight and punch that this is easily forgiven.

Even sound is very decent, with the Dynamic mode offering up surprising weight and dynamics for a flatscreen.

But none of that matters if you can't get the basics right. Backlighting is one of those basics, and this Sony certainly doesn't get that right.