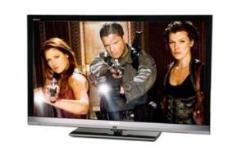 A good TV held back by backlight issues – cheaper, superior options can be found

The ‘40EX713 is a newer, revamped version of the KDL-40EX703. But if you already own the latter, don't worry. We've been assured by Sony that the tweaks have nothing to do with performance or vital tech specs.

Both use Sony's Bravia Engine 3 and Motionflow 100Hz picture processing and have four HDMI inputs at their disposal. Put the two side by side and you'll see a slightly thinner bezel on the newer design.

Backlight problems are back
Of more importance to us is how this TV looks and sounds. And, we have to say that we're disappointed. Inconsistent backlighting affected quite a few Sony screens that passed through our test rooms in 2009.

In 2010, this problem has been far less common. But it appears to have reared its ugly head in the case of our ‘40EX713.

This LCD TV uses an edge-lit LED backlight and the vast majority of issues are, you guessed it, around the edges. Light bleeds in from all four corners, disrupting the black bars that run along the top and bottom of the screen when watching a film.

Watch the opening couple of chapters from the Solomon Kane Blu-ray, and light seeps into the main picture, washing out parts of the image and reducing black levels quite dramatically.

This is a shame, because in other areas of picture performance, the Sony puts in a very respectable showing. Edge definition and general detail levels are relatively high, panning scenes and rapid movement are both handled well, with no visible signs of image flicker or judder.

Sound quality is ok for a flatscreen of this type, but nothing out of the ordinary. Colours are natural and nicely judged too.

Were it not for the backlight blip, you'd be looking at a solid, four-star TV set.

But, when you can pick up Sony's own Award-winning KDL-40EX503 for £660, we're still not quite sure why you'd go for this below-par performer instead.