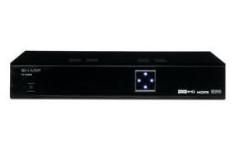 You can buy much better than this

While standard Freeview HD boxes were quick to appear, their recording equivalents – branded as Freeview+HD – have been frustratingly delayed. So, has Sharp's TU-T2HR32 been worth the wait?

First impressions aren't great. Some set-top-boxes give you an alphanumeric display for easy station identification and other handy status information: the TU-T2HR32 gives you what appears to be a miniature version of the alien comms panel from Close Encounters.

Doubtless the permutations of blinking lights will make more sense the more you live with the Sharp, but at first glance… well, we've seen clearer systems, let's put it that way.

Standard set of connections
Socketry is as you'd expect for the class, with a single HDMI, twin Scarts and optical and coaxial digital outs. However, as with many of its ilk, the Sharp won't output Dolby Digital 5.1 sound (where present).

As an additional frustration, the ethernet and USB inputs are largely redundant, at least at present: the TU-T2HR32 won't replay digital media from USB drives, and it can't access or stream content from the internet or your network.

In fairness, such functionality might not concern you at all – but equally, it's available in other boxes at no extra cost.

High on the frustration scale
In its defence, the Sharp fulfils its primary roles well. Live and recorded picture quality from standard-definition and HD channels is fine, with dense colours, sharply drawn edges and, in the main, satisfyingly low levels of background noise.

However, it's a frustration that you're not given the option of bypassing the internal scaling, a failing shared by many rivals: we settled on leaving the box at 1080i as the best compromise, as the showroom-friendly 1080p mode tends to soften the image too much.

What's left to say? The fan's a little noisy, the remote control is a basic (rather than learning) design and it's only a 320GB device, when the class standard at this price is now 500GB.

All in all – and especially in light of the ability offered by the recent entries in this market – it's hard to see the appeal of this Sharp.

See all our Freeview box reviews