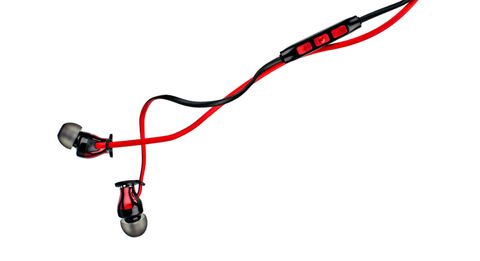 Some headphone ranges are just plain confusing. Mixing multiple designs and model numbers is a recipe for a sore head. Sennheiser’s Momentum range has no such issues.

First came the launch of the excellent over-ears, followed by a smaller pair of on-ears. A third addition to the family then came in the shape of the Momentum In-Ears.

The Momentum range has a reputation for style and comfort and these in-ears continue the trend. They mix a modern look with a classy finish; the earpieces look striking in their deep-red colourway, complemented nicely by a two-tone headphone cable and in-line remote.

Small details like the Sennheiser logos and cable loops on each earpiece make the Momentum In-Ears stand out from the crowd at this level.

Even the in-line mic and remote has been designed to blend in with the rest of the package – the chunky, yet discreet, buttons don’t leave you fumbling around and the mic has you reading loud and clear.

The M2 IEis feature an in-line mic and remote for Apple smartphones, while a variant called the M2 IEG carries the relevant control/mic combination for Android mobiles (and shares the same sound quality). Fit is excellent and comfort levels are high – you get a choice of four different-sized eartips to help promote a good seal, which is easy to arrive at.

Play a few tracks on either the Apple or Android variants, and these Sennheiser headphones show all the signs of quality buds. They promote a smooth and balanced sound similar to that displayed by both their big brothers. There’s plenty of drive and a great sense of musicality. Lows are rich and weighty.

Play Jay-Z’s Already Home and the pounding bass notes at the beginning of the track are full-bodied but they still arrive with purpose and intent. Leading edges are well defined and the pace is aided by the Sennheiser’s nimbleness and ability to keep a fast-tempo.

Highs are crisp and precise: the strings looping in the background poke and pulse out of the top of the soundstage with impressive dynamism.

There’s a fine sense of clarity to the sound too. Play Hozier’s Take Me to Church, there’s an impressive sense of spaciousness around instruments and vocals. Finer elements such as the echo and reverb around his vocal are easy to pick out and the tune has a real sermon-like feel to it.

Sennheiser’s Momentum range has made a real impact and it’s fair to say the addition of in-ear models has continued to deliver on all fronts.

Though they lost their Awards crown to Klipsch's superlative R6i II in 2018, these former Product of the Year winners remain a fine option for those seeking a pair of in-ear all-rounders for less than a ton.