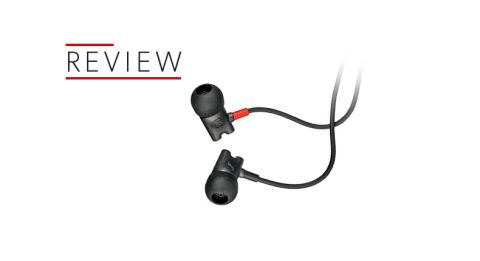 Paying this much for in-ears should leave you wowed, but unfortunately the Sennheiser IE 800 S are simply fine.

If the Sennheiser IE 800 S in-ears were to appear as the mystery thing in an episode of Bagpuss, Emily might bring them into her shop, lay them down in front of the old fat furry catpuss and say her magic words to wake him up.

And when he opened his eyes with a yawn, down might come Professor Yaffle to inspect the item, and say, “Why, these are nothing but a pair of rotten old in-ears.”

You could see his point. There is little to distinguish one pair of in-ear headphones from another, much less to convey luxury or a premium price tag – aesthetically, at least. But thankfully, the mice from the mouse organ would put Professor Yaffle right. “No,” they would say in unison. “They’re not a rotten pair of in-ears, they’re a very expensive pair of in-ears.”

While the mice might set about polishing the Sennheisers with their mops and brushes, what you really need to get these in-ear headphones to shine is a DAC, such as the Chord Hugo. No need to polish these expensive headphones, just feed them the highest possible quality of sound.

Sennheiser already has previous form in the high-end in-ear market, thanks to the original IE 800s, Award-winners back in 2015. At £870, this new version has a lot to live up to.

Needless to say, Sennheiser has put a lot of thought into building these in-ears. Inside each earpiece is a refined version of its 7mm Extra Wide Band driver, and a patented dual-chamber absorber, aimed at delivering a crisp and clear performance for which the company has become synonymous.

The rest of the box is also filled with clever little solutions that set the IE 800 S apart from cheaper pairs of in-ears, such as 2.5mm and 4.4mm balanced cables for those who require other than the 3.5mm standard option, and three pairs each of silicone and Comply foam ear buds.

After a suitable period of running in, we place the Sennheisers in our ears. The first thing we notice is the detail – this kind of clarity and insight is simply not available in less costly headphones – and the impressive amount of space in which it is delivered.

The balance, too, is typically Sennheiser. There is a slight rolling off of the treble, with an extremely rich mid-range and plump low-end that offers an unwaveringly smooth performance, even with harsher or less refined recordings.

But strangely, we aren’t overly excited by the sound. While the IE 800 S time reasonably well, there is a lack of emphasis or punch that renders their performance inoffensive, but rather underwhelming. As well, it becomes clear that is a symptom of a rather inhibited dynamic range: large-scale shifts are delivered without the attack they deserve, while more modest variations in volume lack the necessary expression.

It is overall a quite fine presentation, but at this price we want to be moved and, despite the upturn in detail with these Sennheisers, the best in-ears at even a quarter of the price do that better.

There’s also an irritating amount of cable noise, which is impossible to ignore and to negate this you must sit absolutely still. For anyone planning to use the IE 800 S on the move, it is a disappointing return for what is a hefty wedge of money.

So, while we wouldn’t be so severe as Professor Yaffle, it is difficult for us to be enthusiastic about the Sennheiser IE 800 S’s.

There is the basis here for a high-quality pair of in-ears, but overall the rather disenchanting tuning, erring too far on the side of safety, leaves us cold.