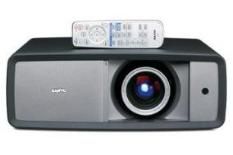 Here's another consummately professional home cinema projector. While it seems the familiar big names are doing their usual thing at this end of the market, arguably less high-profile companies such as Sanyo have really upped their game.

However, there's still one less invigorating aspect of projector design that most manufacturers share, and that's a lack of interest in doing anything too creative with the outside. The same is true of the bland PLZ-Z300.

Get past this minor aesthetic hurdle, though, and it's plain-sailing. Getting the machine set up and your picture sorted is once again refreshingly simple.

Spec list ticks all the boxes
The chunky remote feels good in the hand and has a backlit panel for easy navigation without turning on the lights and ruining the moment, while there's an automatic shutter when you turn the 'Z300 off and on for added impress-your-mates points.

This LCD model also claims a whopping 65,000:1 contrast ratio – certainly one to impress any number-crunchers out there.

Pictures match the impressive spec
We prefer our proof in the eating of the projected pudding, though. And, happily, the Blu-ray release of The Dark Knight certainly presents a striking image.

The opening bank heist scene shows that the Sanyo is capable of bright, vivid outdoor shots, with sharp edges and smooth motion, plus deep black levels.

Only the very best can dig up a little more detail and that impression of depth better than this Sanyo.

We play something more colourful in the form of the zingy transfer on Burn After Reading, and it shows that the PLV-Z3000 is perfectly capable of a wide gamut of colours and good contrast levels.

As we've mentioned before though, the warmth and texture to bold colours are sometimes missing.
Sanyo can count itself a tad unlucky.

A highly capable, thoughtfully constructed machine, the PLV-Z3000 is found wanting only as a result of
some truly exceptional value rivals.