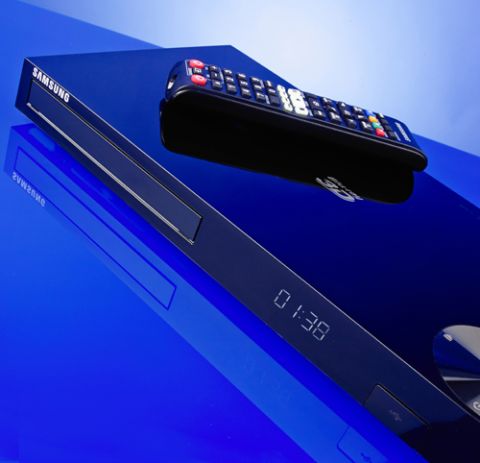 As a low-cost option, the Samsung isn’t a bad shout – not the best in class but still competitive

Content is king. Well, at least that’s what Samsung seems to think, and the BD-F6500 is a good example. The advent of smart devices such as Blu-ray players and TVs has heralded an influx of apps delivering on-demand and catch-up content from a raft of providers.

One slight niggle for us is that it’s tricky getting everything under one roof. For example, some manufacturers offer catch-up TV from BBC iPlayer and Demand 5, but not 4oD or the elusive ITV Player. Well until now, that is, as Samsung is the first manufacturer to offer all four of the UK’s catch-up services on its smart Blu-ray players (five if you also include the BBC Sport app).

But content isn’t the be all and end all, especially where our star ratings are concerned. Picture quality, sound quality and value for money are what we crave above all the added features.

It’s good for the Samsung BD-F6500, then, that the picture quality when using these streaming services (unfortunately the ITV Player app wasn’t quite ready at the time of review) is up to scratch.

Watch The Apprentice and you’re guaranteed close-ups of many a fevered, not to mentioned preened and plucked brow, and the Samsung does a good job of conveying all this detail and the natural (and at times not-so natural) skin-tones on show. Noise and digital artifacts aren’t completely eradicated, but they’re not vying for your attention either.

Swap streamed content for a DVD and the Samsung is a more qualified success. Upscaling The Dark Knight to 1080p, the BD-F6500 produces a detailed image, beating rivals for definition and realism.

The jump to HD brings the best out of this Samsung Blu-ray player, as you might expect. The added resolution fills in the gaps to produce a stable and very watchable image. Continuing the superhero theme with Iron Man 2, the Samsung BD-F6500 does a good job of showing off the finer details on the titular suit. It also tracks the debris in the faster-paced scenes smoothly and with minimal judder.

3D performance is pleasing too, with The Adventures of Tintin smartly layered and not exhibiting the forced, unrealistic effect that some lesser players can favour. Colours look a little subdued though, especially when pitted against the ridiculously punchy and bright picture of the Sony BDP-S5100. There’s also less detail in the darker scenes.

The Samsung F6500 sounds enthusiastic at both extremes of the frequency range. Lows hit with power and authority: gunfire and explosions are communicated with an impressive sense of scale but there’s a lack of control with hefty bass notes and the banging and crashing further up the frequency range.

The Samsung BD player sounds unbalanced, and this is really brought home with music. Play Timbaland’s Meet In The Middle and bass notes sound overbearing, while the treble is too bright and excitable.

The F6500’s narrow chassis makes it a little easier to put in a rack or second room. The curved right corner is a nice touch, too – bringing to a halt what would otherwise be a dull rectangular shape.

On top of the unit there’s a round panel with four touch-sensitive control buttons: one each for power, play, stop and eject. They’re super-sensitive and the player is quick to respond to your prods.

The front panel, meanwhile, hosts a large, vibrant display that’s easy to read across a darkened room. A USB socket is hidden behind a small pullout flap, into which can be plugged MP3 players, digital cameras, and USB card-readers.

This is great, as part of the appeal of Samsung Blu-ray players is their compatibility with different file formats; you can throw pretty much anything at the BD-F6500’s front USB socket, including MKV, AVI, DivX, WAV, FLAC and WMA files.

In keeping with its budget price, the Samsung has a basic selection of outputs including HDMI and optical digital. There’s wired and wireless connectivity (including Wi-Fi Direct for sending content directly to the player, Apple AirPlay-style), although we’d always recommend a wired connection for stability – especially when you’re streaming video over a network.

The BD-F6500 is Samsung’s first dual-core Blu-ray player and as such it’s quick and easy to navigate through the menus. The slimline remote control is nice to hold, and although there’s no backlight the main control buttons do glow in the dark – which is more than can be said for some rival remotes.

Apps is self-explanatory, as should be Movies & TV Shows. Click the latter and you’re greeted with the artwork for a host of movies available to stream over the internet. They’re sourced from various locations, including Netflix, Lovefilm, and Samsung’s own Video Hub pay-per-view service.

Photos/Music/Video is where you head when you want to stream content from connected devices such as a USB stick, digital camera, or simply want to spin a disc.

For the money, the Samsung BD-F6500 is a likeable and competent machine. The feature count is high and picture quality is of a good standard – it’s a shame that the sound quality lets the side down.