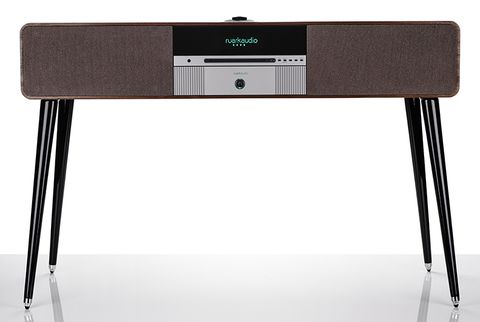 “And now,” as Monty Python memorably had it, “for something completely different.”

Think you’re riding the crest of the retro wave with your brand-new turntable?

Think again. If you want a bit of modern antiquity, Ruark’s remarkable R7 mk2 is where it’s at.

Back in the sepia-tinted pre-decimalisation day, the radiogram was a staple of the nation’s front rooms.

Half radio/turntable/amplifier/speaker, half large and awkward-to-dust item of furniture, the radiogram eventually evolved into the stereogram – and then headed for obscurity as hi-fi manufacturers around the world began a drive towards separates.

Aside from being obligatory set-dressing in any TV drama set in the mid-20th century, obscurity is where the radiogram has languished ever since. That is until Ruark had its big idea.

Obviously, reinventing the radiogram for the 21st century isn’t something to be rushed into.

This is a product that needs to function on a couple of levels: it must make sense as a decorative piece of furniture every bit as much as it needs to work as – for want of a better description – a music centre.

In terms of technology, the R7 mk2 ticks most boxes. Radio is covered thanks to DAB, DAB+, FM and internet radio capability. The slot-loading disc drive plays both CDs and MP3 discs.

Integrated wi-fi allows streaming both from a DLNA home network and aptX Bluetooth. Auxiliary inputs include optical, coaxial and two pairs of stereo RCAs, while outputs extend to a USB socket and a 3.5mm stereo headphone output.

The 160W total power comes courtesy of class A/B amplification, and is deployed to drive a couple of 14cm dual-concentric drivers (hidden behind cloth grilles) and an 20cm downward-firing subwoofer.

Bass presence is given extra impetus by pair of bass-reflex ports that vent from the base of the cabinet too.

Ah yes, the cabinet. A big part of the original radiogram’s place in our collective hearts relates to its function as furniture, as decoration – and Ruark intends the R7 mk2 to deliver as much visually as it does on an audio level.

In fact it looks and feels almost exactly like a super-sized version of every other product in Ruark’s range – the glossy black legs only adding to its aesthetic appeal.

Judged purely as a £2000 piece of furniture, we’d expect it to feel a little more luxurious – but then again, if you go shopping for a sideboard, would you bemoan the lack of internet radio connectivity?

And the option (at extra cost) of an audio-visual mount that allows the Ruark to support a TV above and a set-top box, console or Blu-ray player below only increases its ‘high-performance furniture’ credentials.

The R7 mk2 is controlled via Ruark’s puck-shaped remote control – there’s a recess on top of the cabinet where the remote can sit when not in use. It’s an RF rather than infra-red device, so will work from a different room.

The Ruark connects swiftly and relatively painlessly to our wireless network – the display, which is bright and legible, guides us through the once-only set-up wizard.

And from there on it’s a straightforward job to switch inputs, save favourite radio stations, make bass/treble adjustments and so on.

We start with internet radio, and perennial office favourite FIP.

The French station’s 128kbps stream is stable, and when the music shifts (as it inevitably must with FIP) to Madeline Peyroux and her smooth-as-warm-butter reading of Leonard Cohen’s Dance Me to the End of Love, the Ruark sounds clean, detailed and right at home.

There’s enjoyable fluidity to the presentation, the languid tempo handled with real confidence.

Easy listening just doesn’t get any easier than this – if your music taste runs to the airbrushed and unthreatening, the R7 mk2 encourages you to put your feet up and wallow.

Mixing it up a little, we switch to the CD drive and a disc-borne copy of The Flaming Lips’ The Soft Bulletin. It’s a pretty overwrought recording, with effects piled on top of each other like an aural wedding cake.

The HDCD encoding (remember that? It’s not quite as retro as the Ruark but it’s not far behind) delivers considerable dynamic range, and in terms of low-frequency attack this is a fiercely testing album.

It’s too fierce for the R7 mk2, which is flustered by the levels of attack and unable to give the plentiful low frequencies the sort of body and solidity the recording requires.

Consequently the album’s drive and intensity is rather neutered, and the limits of the Ruark’s comfort zone are defined as if by a Boundary Commission.

Results are similarly mixed when we move to BBC Radio 3 via the (grippy, stable) DAB receiver.

The simpler, the sparer and the smoother the piece of music (some of Freddie Hubbard’s less frantic recordings, for instance), the more authority and more understanding the R7 mk2 exhibits.

Up the ante, though – Radio 3 is never far from some National Philharmonic of Russia bombast – and its irresolute way with low frequencies, rather congested soundstage and shortage of decisive dynamics come to the fore.

This is the case across the board – whether using optical, coaxial or analogue inputs, or music stored on your home network (the Ruark has a grasp of most standard-resolution file types, including PCM, FLAC, AAC and MP3).

The R7 mk2 is a deft and detailed (if rather narrow-sounding) performer right until the moment the going gets hectic or bassy, when its composure deserts it.

If you place low-frequency punch, solidity and presence high on your list of must-haves, this Ruark isn’t going to warrant a place on your shortlist no matter how decorative it looks in your home.

But where the R7 mk2 is concerned, we are always going to end up coming back to the way it looks.

Because judged in absolute terms – as an amplifier, CD player, radio, streamer and stereo speakers – there’s simply no way it can compete against alternative equipment at the same sort of money.

But, of course, that alternative equipment looks like a stack of hi-fi that requires a rack and a lot of cabling, as well as needing more mains sockets. It won’t be a piece of furniture.

We’re not asking the Ruark to perform like a ‘regular’ £2k system, of course – you’re paying a premium for that cabinet, and Ruark’s overall presence.

But we need it to reach an acceptable standard of performance – and we can’t help but find the R7 mk2 wanting.

We’re not even in a position to suggest a similar, but better-performing, alternative – because right now the R7 mk2 is number one in a field of one.

There are pros and cons, of course, in the compromises the Ruark requires. If you can live with them, then dive right in: the Ruark R7 mk2 is simply the best-sounding item of furniture we’ve ever heard.

See all our Ruark reviews