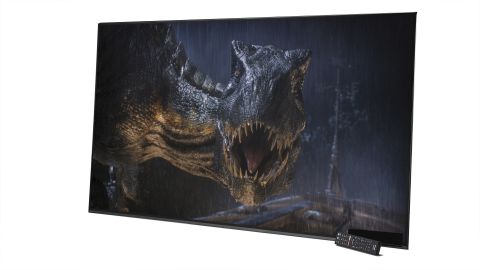 The Sony AF9 is a stunning television in so many ways, including by being one of the best-sounding TVs we’ve tested

Authenticity is important to us. Whether it’s a hi-fi component, Bluetooth speaker or a telly, the ultimate goal is to deliver to the user the closest possible recreation of a piece of content. That’s the whole point of the exercise.

So it’s with some excitement that we received the news of Sony’s Master Series: a range of professional-grade TVs designed to get closer to the content-creator’s intention than ever before. The company is in a unique position to deliver this, as it manufactures many of the cameras used by filmmakers and the reference display that’s used by practically every movie studio.

Sony has chosen to serve this goal with two different models (both available in two sizes) each using different panel technologies. That might seem illogical – surely one is more accurate than the other – but Sony says it is simply offering customers a choice. From that, we could surmise that the respective strengths of the LCD-derived ZF9 and OLED-based AF9 are peak brightness and black depth.

Viewing both models at a recent press event, we were most drawn to the AF9. So is this the new benchmark for TVs? That’s certainly what we’re hoping for.

The AF9 could well be the new benchmark for TV design, at least. While it isn’t necessarily a replacement for the A1 (Sony has suggested that the two models will run concurrently, at least in the short term), it’s clear from first glance that it’s a development of that model’s unique approach.

This Sony TV, like the A1, has an easel-like approach, with the thin main panel leaning against a chunkier stand section. In fact, the AF9’s lean-to stand is much chunkier than that of the A1, and is shaped more like a half-hexagon than a rectangle.

The reason for the larger design is because it contains two subwoofers, rather than the one that was housed in the A1. They fire to the side, too, rather than backwards, which Sony says improves performance when the TV is wall-mounted. Conversely, the extra bulk means a wall-mounted AF9’s screen stands more proud from a wall (the total depth of the chassis, when folded for mounting, is about 9cm – less than a centimetre of which is the super-slim screen itself), but that simply enhances the impression that it’s floating.

In a darkened room, the exceptionally thin, embellishment-free bezels help the hardware vanish and the onscreen action speak for itself. There’s not even a logo on the front, and the subtle, white light on the bottom edge can be switched off if you want full stealth mode.

The extra woofer isn’t the only change made to the built-in sound system. As the A1 did, the AF9 relies on actuators that vibrate the screen, but it also adds a third, central actuator to those on the left and right. The result is a 3.2 speaker system powered by 98W of amplification that’s invisible when the TV is viewed from the front.

Besides tweaking the configuration of the speaker system, Sony has also enhanced the actuators themselves and the entire structure of the panel that they vibrate. The transducers are now mounted on a metal body with six mounting points instead of four. Add a brass reinforcement plate between them and you’ve got a far more rigid design that Sony says improves performance dramatically.

One peculiar feature is a pair of speaker terminals on the rear of the television, which allow it to become the centre speaker in a surround sound system, with your home cinema amp sending audio via standard speaker cable. It’s an ingenious idea, and one that says a lot about Sony’s confidence in the AF9’s sound quality.

The enhancement to Sony’s already-innovative sound solution isn’t the only technical highlight of the AF9, and Sony points proudly to the new X1 Ultimate processor at its heart.

This upgrade over the X1 Extreme of the A1 (and XF9005) brings with it a number of enhancements such as Object-based Super Resolution, which intelligently picks out and enhances specific objects in an image, and an improved version of the company’s existing Object-based HDR Remaster feature, which enhances the contrast of an image on an object-by-object basis. Then there’s the Pixel Contrast Booster, which “maximises the dynamic range by widening the range of colour reproduction at high brightness”.

While Android TV’s app lineup is comprehensive, it lacks ITV Hub and All 4 as standard. Cleverly, Sony has plugged the gap by adding YouView, giving you access to the full suite of catch-up services. As for the rest of the line-up, there’s Netflix and Amazon Prime Video (both in 4K with Dolby Vision), Google Play Movies & TV (in 4K but not HDR), YouTube, Rakuten, PlayStation Video, Plex, VLC, TuneIn, Spotify and a whole load more. Other than Now TV, there’s no app of significance missing.

Android TV, here presented in version 8.0 form, continues to improve, and proves snappy to use. It’s not perfect, though, and occasionally button presses won’t register, making fast scrolling through menus particularly frustrating. Bundling a more advanced remote with better wireless tech than old-school IR, as Samsung and LG do, would possibly help with the issue.

As well as standard HDR10 and HLG, the AF9 also supports the more advanced Dolby Vision HDR format. And, despite some early issues getting our Oppo UDP-203 to send the correct signal to the telly, we can confirm that the AF9's Dolby Vision support extends to the HDMI inputs as well as the built-in streaming services.

Alongside the four HDMIs on the back of the set you’ll find USB sockets, speaker terminals, an ethernet socket, optical output and headphones connection, as well as the aerial socket and two satellite connections. Freesat is not supported, though, so the satellite tuner is of limited use to UK users.

At the launch event for the AF9, Sony used the out-of-the-box Custom picture preset to illustrate the set’s similarities to the BVM-X300 monitor screen that so many studios use for mastering movies and TV shows. The similarities were there, but it brings with it a heavy sepia tint and switches off most of the set’s advanced processing modes, resulting in an image that’s unauthentically warm and lacking dynamism.

We stick to the Standard mode, but this still needs a surprising amount of tweaking. For non-HDR content we turn the Light Sensor off, add a couple of points to the Contrast, drop Colour by a few points, change Live Colour to Low, and switch Reality Creation from Auto to Manual.

For HDR content, the Live Colour and Advanced Contrast Enhancer settings make it hard to find a perfect balance between dynamism and realism. The most natural colours are achieved by dropping Live Colour to Low, but to squeeze the most punch out of an HDR signal requires switching to Medium and setting the Advanced Contrast to High. There is a touch of over-enhancement to proceedings as a result.

The picture is pretty darn fabulous regardless of the settings, but it’s not quite the best-of-all-worlds image that you get from a 2018 LG OLED.

Watching the 4K Blu-ray of Blue Planet II, we opt for the more subtle set-up. While some of the more exotic denizens of the deep (the lovely yellow, speckled seahorse, for example) are a little less vibrant in appearance, the more natural approach ensures that the various blues and greens of the oceans and seas are controlled, nuanced and realistic.

Detail levels are exceptional, from the darkest parts of the image (you can see everything those sleeper sharks are up to) to the brightest (look at the clouds for evidence), and everything is sharp and crisp – as long as you haven’t left Reality Creation on Auto.

Switch to Guardians Of The Galaxy Vol.2 and our picture preference swings to the more dynamic options outlined above. A little bright detail is sacrificed, as is a touch of the naturalism of the opening scene, but this is necessary to make the most of the movie’s bright lights and neon colours. This is now a punchy, vibrant image that allows the comic book action to pop from the screen.

With non-HDR content, the TV is just consistently superb. Play the 1080p Blu-ray of The Imitation Game and the detail on offer is impressive – every wrinkle and worry line on Benedict Cumberbatch’s face is revealed, and the tight patterns and natural textures of the tweed suits are effortlessly reproduced. LG’s 2018 OLEDs take a more smoothing approach to upscaling, but the Sony is crisper and more insightful. Add in perfectly judged colours and the supreme motion processing, and we’d go as far as to say that the AF9 is the better display for 1080p.

Drop down to standard-def and the balance swings back in LG’s favour, with the smoothing having a rather transformative effect on the picture. But the AF9 continues to impress with the balance it applies to colours and sheer amount of detail it digs up – even if the edges are rougher.

Gamers, meanwhile, will be pleased to hear that the AF9 is significantly more responsive than the A1, with lag reduced to 27ms from 47ms by our measurements.

The two sideways-firing woofers create a spread of sound not previously heard from a TV. In an average-sized room, the soundstage will fill the wall that the AF9 is closest to, but the trio of actuators ensures pin-point accuracy of detailed effects and the kind of directness that ensures clarity of dialogue, regardless of volume and complexity of the rest of the soundtrack.

Tonal balance, meanwhile, is excellent. Bass is pretty deep but it integrates effortlessly with the detailed mid-range and crisp, controlled treble. The presentation as a whole is solid, weighty, punchy and dynamic.

We would still suggest that a TV of this price and quality deserves to be partnered with a proper surround sound system, but while almost any TV could be improved through the addition of a decent soundbar, that’s not the case here.

Should you choose to go down the surround sound route, you’ll probably be tempted to take advantage of the AF9’s speaker terminals in lieu of a dedicated centre channel, but we’d advise against that. The AF9 sounds excellent for a TV, but even the most advanced AV receiver will struggle to compensate for the tonal and quality differences between it and the front speakers of a decent surround package.

The Sony AF9 is a tricky TV to rate. Given Sony’s usual close-to-perfect default settings, the relative complexity involved in getting it performing its best is a surprise. That you have to choose between dynamism and authenticity when playing HDR content is a disappointment, particularly as a 2018 LG OLED gives you the best of both worlds.

But between its exceptional motion processing, superb detail, awesome 1080p delivery and genuinely excellent sound for a telly, the AF9 wins itself the full five stars. You’ll need to value those particular strengths to justify spending the extra £1000 over an LG C8, but perhaps the Sony won’t stay at its £4000 asking price for too long.