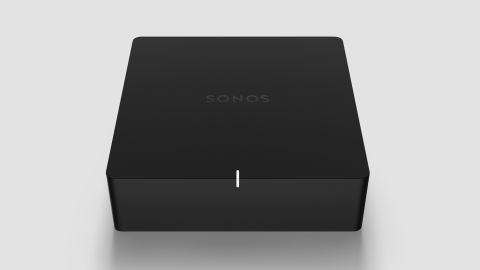 The Port might be more powerful and future-proofed than the Connect it replaces, but it simply doesn't sound good enough

One of hi-fi’s greatest strengths is how rarely great-sounding components become redundant. Assuming it’s still in working order, even your first tape deck or turntable can still be fed new music from a healthy stream.

That’s why, rather than replacing your old system entirely, multi-room solutions such as Sonos are usually tasked with encompassing it within the eco-system, with peace-making modules such as the Sonos Port.

Conversely, the Sonos Port is replacing a soon-to-be redundant model in the form of the Connect. Its core abilities are largely the same – acting as a multi-room streaming module for your traditional hi-fi set-up, and allowing offline components such as turntables and CD players to be played throughout the house – but it has been brought up to date so that it is compatible with newer technologies and, inevitably, the company’s future plans.

Place it side-by-side with a Connect box, and the Port boasts a sleeker, smaller black box ornamented only by a strip of light and highlighted Sonos logo on its crown.

It’s not as robust as we’d usually expect from a streamer costing this much, but isn’t much different in that regard from its predecessor. Apart from plugging everything in and pressing the Join button, you won’t actually be touching it often anyway.

At the rear of this shallower chassis you will find ethernet ports, which we recommend you use for a more stable connection, alongside two pairs of stereo RCA terminals (one in, one out) and a coaxial digital output.

There is no longer an optical digital out, but that shouldn’t trouble too many people. A 12V trigger is also useful for automatically waking your amp when a signal is sent through the port, reducing the number of remotes you have to locate.

The stereo RCA input is good for just about any component without internet access, given you have the right cables, but there is no phono stage built in, so you’ll need to buy a separate one if it isn’t built into your turntable.

It’s worth noting that Sonos hasn’t made the Port with television in mind, so if you want to connect your TV without lag between picture and audio then you’re better off with the HDMI-toting Sonos Amp. That costs about half the price again but, as the name suggests, it’s an amplified, just-add-speakers unit.

Apple users will be able to make use of AirPlay 2, but almost all other streaming is done from inside the Sonos app, which is the best of its kind. You can link in all of your favourite streaming services and music held on remote devices. By drawing from multiple sources, you can create a queue without having to navigate a number of apps. As far as streaming apps go, this is pretty ideal, but Tidal and Spotify users also have the option to send music directly from those apps.

You can also fiddle with bass and treble here, as well as using Sonos’s Loudness feature but, assuming you have a well-balanced hi-fi system, we’d recommend ignoring those. Out of the box is actually the best the Sonos Port can be.

There are a few positives to speak of – it is a fairly clean and lean presentation, for example, which you might not necessarily expect from a module such as this, at this price. The levels of detail are not Vermeer-esque, perhaps, but there is enough insight to divulge when we are listening to CD-quality files as opposed to a Spotify stream.

Balance is good, too, which is why you can leave that EQ well alone. There is no effort made to falsify bass levels, or roll off treble to appease rougher partnering speakers or electronics, and the midrange is full enough to provide a smooth and easy listen.

Unfortunately, however, the Port’s presentation is about as disorganised as a teenager’s bedroom. Nobody seems to know where their part comes in and how loud it should be, a combination of missed steps conspiring to confuse even the most seemingly straightforward arrangements. If your streamer cannot keep in time a constant 4/4 kick, control will rapidly slip from its grasp the more parts get planted on top.

That would be enough on its own, but perhaps worse is how uninterested the Port appears to be in whether you enjoy your music or not. Dynamic expression is poor and punch is so lacking you almost expect its corner to throw in the towel.

This is all the more frustrating because it represents a step back. The Port is cleaner and more detailed than its predecessor, but the Connect manages to tie music together and deliver it in a much more cohesive and engaging fashion.

It’s those latter talents that are most important, and the fact Sonos is asking its customers to spend more on a worse performing product is a real disappointment.

Using an external DAC is helpful, so if you have a decent one built into your amplifier, we’d suggest using the Port’s digital output – though we’d hesitate to suggest adding to the already significant cost by incorporating an outboard DAC.

We try it with the Award-winning Chord Qutest (£1195), which predictably improves the performance but not to a miraculous extent. As a £1600 streamer, this pairing would still receive only three stars.

If you are set on incorporating your hi-fi system in a Sonos multi-room set-up, we’d recommend spending a little more on the four-star Sonos Amp. While it isn’t perfect, it is more accomplished, whether or not you ever make use of its added features.

Otherwise, if it’s a multi-room streamer you’re after, and it doesn’t necessarily need to be Sonos, then components such as the Bluesound Node 2i are streaks ahead of the Port in terms of sound quality.

We wish the Port had been better, but if you’re determined to replace your outgoing Sonos Connect (although it's important to note that you don't absolutely have to do so), you’re going to have to save a bit more or make do with average-at-best audio quality.

Read our Bluesound Node 2i review