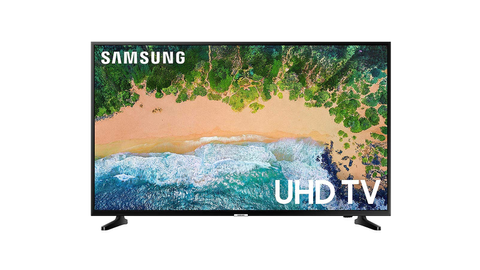 The Samsung NU6900 is solid smart TV at an affordable price, but its picture quality is just a bit too compromised

If you’re not too fussed about having the very latest picture technology, the Samsung 65in NU6900 (UN65NU6900) is a budget LCD screen with plenty to offer at a good price.

It's obviously not up there with the company’s quantum dot QLED displays, but it does fair well against other entry-level TVs for features by including a 4K resolution, HDR support and Samsung’s brilliant smart TV offering.

Of course, the low price point does mean there are some compromises to be had but, if you’re willing to live with those, the overall performance is good and makes the TV worthy of consideration if your budget is tight.

Samsung always does a good job with design, even on its budget sets, and for a basic 4K LCD TV, the NU6900 looks very nice indeed.

Of course, it’s a plastic chassis in basic black, but the bezels are relatively slim and there’s a textured finish to the back panel that shows a hint of flair compared to plainer competition.

The feet are black plastic too, but sturdy enough, and sit at either end of the screen. If you would prefer to wall mount the TV, you’ll need a 400mm x 400mm VESA mount and a helping hand – at just over 55 pounds, it’s big and heavy enough that you’ll want to have a second person around to help with the installation.

On the back of the set there's a set of grooves running the length of the TV for cable management, helping you to keep cables for power, HDMI and coaxial connections neat and out of sight.

While we are testing the 65in version of the NU6900, it’s also available in a range of sizes from 43in at its smallest, up to 75in at the largest.

The connections for the NU6900 sit along the right-hand side of the chassis and face to the side, which is great for easily adding and removing devices – particularly when wall mounted.

Its connectivity options are where it begins to show its budget credentials, though, with just two HDMI ports (one with ARC) and a single USB connection. We’d usually like to see at least four HDMIs to ensure a moderate setup doesn’t require constant plugging and unplugging of devices. If you have much more than a set top box and a Blu-ray player, we’d recommend adding an HDMI switch to your budget.

The rest of the port selection is equally sparse, and it's a little surprising the things that have been overlooked, such as a 3.5mm jack for headphones, RCA audio connectors or any component and composite video outputs. This TV is all about HDMI, which may rule it out for users with legacy kit.

There is a coaxial connector for attaching an antenna, and an optical audio port for a soundbar, plus there’s built-in wi-fi and ethernet for connecting the TV up to the internet. There’s no Bluetooth though, so you won’t be able to use wireless headphones with this set.

The NU6900 ships with a pretty basic remote that offers all the standard functionality you’d expect, alongside a four-button D-pad to navigate menus and Samsung’s smart TV offering.

It’s a long way off the more intuitive minimalist design of the Samsung One Remote that you get with pricier sets. Considering the surely relatively small cost to Samsung to include this remote instead, it’s a shame they’ve stuck with something so old school when competitors are offering much sleeker, more modern options.

The NU6900 features Samsung’s SmartThings interface, which is one of the best smart TV platforms available. Not only does it offer access to Samsung’s fairly expansive app store, which includes recent additions such as support for Apple TV content, but you can also use it to control compatible smart devices around the home.

You won’t get the full experience Samsung offers on its more premium sets, such a voice interaction, though: the remote has no built-in microphone.

The NU6900 is a solid performer, offering a stable Ultra HD picture for everything from movies and TV shows to 4K games, and a decent handling of color and contrast for its level. There’s even support for HDR10+.

That said, it does predictably fall short of what you’d see on a more expensive set. While watching the scene from Spider-Man: Homecoming where Spidey scales the Washington Monument, the bright blue skies and lush green foliage look less vibrant than we’d expect. Other budget sets, such as the Vizio E-Series, manage a better job at making this look more true-to-life.

The compromises continue when it comes to black level performance. As the NU6900 uses edge backlighting, black levels are closer to a dark gray, while more subdued colours and dimmer environments can also lose some of their impact.

Watching a scene from Blade Runner 2049, a night scene set next to a campfire shows off both the strengths and weaknesses that this set possesses.

For example, the NU6900 does well with highlighting brightly lit objects in the dark, thanks to its brilliant contrast performance. However, with no dimmable local backlighting, high-contrast scenes are often filled with bright halos of unwanted light that spill over into the darker portions of the picture. That can be quite distracting, and cause scenes with extremes of both darkness and light to lose their ‘wow factor’.

Additionally, while the NU6900's 60Hz refresh rate is more than adequate for most TV viewing, fast motion is just a little choppy.

The NU6900 features a pair of 20-watt speakers, which produce enough sound to fill our testing room, and are pretty clear, too. Even approaching top volume, there was none of the chassis rattle that you can often get at this level.

That’s probably partly due to the fact that there's a real lack of bass, due to there being no built-in subwoofer. We don’t expect much more from a TV at this level, and for those that are capable of a bit more oomph, there are usually other compromises to be had.

For a fuller, richer sound, you’ll want to invest in a soundbar.

If you don’t have a lot to spend, the Samsung NU6900 is a solid 4K TV that offers a fair performance for the money. An attractive design, strong contrast and a decent smart TV experience make it a great set to pick up on sale.

Of course, there are flaws. The limited port selection is frustrating, and so-so picture quality means it isn’t one for picture purists. The lack of oomph from the audio means you’ll probably want to find budget for a soundbar in the long run, too.

For those with a bit more to spend, the TCL 6-Series Roku TV offers better picture quality and more robust smart TV software for about $150 more. But if your budget is tight, this is not a bad choice for a big screen without the big price tag.