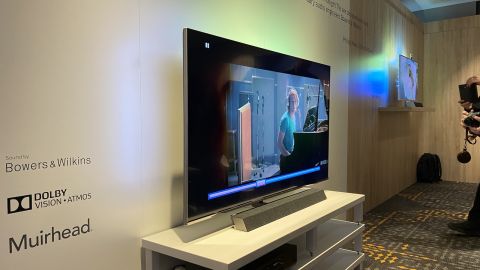 Philips and Bowers & Wilkins are continuing their collaboration into 2020 with the announcements of the 9435 and 9235 models. These are LCD sets with a B&W speaker enclosure (though not a soundbar) that doubles as a stand.

The 9235 is a stylish, compact 43in set with an edge LED backlight and 2.1 speaker arrangement, but we haven't yet been able to see it in action. However, we have had a demo of the 9435, and its 2.1.2 speaker system (the '.2' represents two upward-firing drivers) certainly seems to create a much taller and more atmospheric sound than the average TV.

The 9435 is designed to look like a screen floating above a soundbar, with the thin neck that connects the two being more or less invisible at many angles.

According to B&W, the smart, Kvadrat cloth-covered audio component isn't a soundbar, but a speaker enclosure. That's because it contains only speakers, with the amplification and other sonic electronics housed in the main chassis of the set.

When placed on a tabletop, the speaker enclosure essentially forms the front part of a pedestal stand, and so extends further forward than the display. Anyone thinking of wall-mounting the set will be pleased to know that included in the box is a bracket that allows the speaker to protrude less.

The set is relatively thick, though, as is the norm for Philips TVs. Not only is this an LCD set with a direct LED backlight, but the three-sided Ambilight also adds a little bulk and requires you to maintain a certain minimum distance between the screen and rear wall.

The 9435 will be available in 55in and 65in variants, but the specs are otherwise the same. The Android TV 9.0 operating system (an Android 10 upgrade will be made available, but only when Philips deems it 'stable') ensures a broad range of features and apps, including Disney+ as soon as it launches in your country (24th March in the UK).

To match the smart looks of the TV, Philips is bundling the 9435 with a new remote. It's a more stylish affair than Philips has produced before, with the Muirhead leather wrap making it look particularly classy. The buttons seem a little cramped at first glance, but the backlight (a disappointingly rare feature these days) should boost the user experience. Those who prefer to use voice control, meanwhile, can take advantage of the integrated Google Assistant and 'Works with Alexa' certification.

The array of physical connections includes four HDMIs, two USBs, an optical audio output and headphone socket. The HDMIs won't be 2.1-certified, but will offer some elements of the HDMI 2.1 specification, including support for Auto Low Latency Mode (ALLM).

Variable Refresh Rate (VRR) won't be supported, though, as Philips is waiting for next-gen consoles before making that a priority. eARC is off the menu, too, with Philips saying that it isn't required to get Dolby Atmos from a TV as long as the format used is Dolby Digital Plus – which is the current approach of streaming services such as Netflix and Amazon Prime Video.

Under the skin is the P5 Perfect Picture Engine powered by a quad-core processor, and Philips is continuing to support both Dolby Vision and HDR10+ (as well as HDR10 and HLG).

Perhaps the most crucial specs, though, are those that refer to the Bowers & Wilkins sound system. This consists of five drivers arranged in a 2.1.2 configuration and rated to 50W. So that's two forward-firing drivers, a subwoofer, and two upward-firers to add genuine height to Dolby Atmos soundtracks.

There was certainly a good sense of height in the demos we saw at the launch event. The first involved a clip from the second season of Lost In Space on Netflix, where the crew attempts an ambitious manoeuvre with a huge spacecraft.

The space given to the cacophony of effects was impressive, with sounds stretching effectively to the areas to the left, right and above the TV. We did, though, clock some reediness to brass instruments in the soundtrack and a little less directness than expected, but these could be peculiarities of the particular demo or TV sample.

A demo of the 4K Blu-ray of Rocketman was even better. Again, we felt that the forward-facing elements of the soundtrack could have been projected a little more, but the overall spaciousness, tonal balance, detail and dynamics on offer made for a natural, authentic and involving clip.

Finally, we got to hear some standard stereo music through the TV's speakers, and it's clear that the delivery is far more rhythmic, solid and weighty than that of the vast majority of TVs. Sonically, this should be a good choice.

The demo of the 9435 was so focused towards audio that we really couldn't draw any conclusions about the picture quality. This was a pre-production sample and, for all we know, the picture settings may not even have been tweaked.

That said, we've got high hopes for a set that combines the brightness of a direct LED backlight and the lovely, colourful glow of Ambilight.

It's too early to deliver a final verdict on the 9435, but we left the demo session excited by the prospect of getting it in for review. Sonically, it seems to be a step above its premium LCD rivals, and it's a more stylish set than most, too.

The picture quality is pretty much an entirely unknown quantity, but if Philips can get that (and the pricing) right, it should have a winner on its hands.