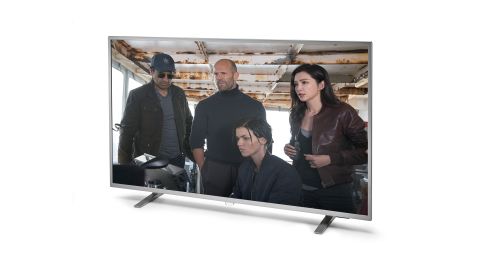 The Philips 43PUS6703 doesn't set the world alight, but if 43in is your limit, it's well worth a look

It’s strange how a 43in screen TV is now considered on the small side. These days, as TV manufacturers are more concerned with pushing next-gen flagship tellies, we rarely receive anything smaller than 49in for review.

The few models we have seen were rather disappointing affairs too – so much so, that we couldn’t find one worthy of a 2018 Award.

While the Philips 43PUS6703 is unlikely to be an Award-winner either, it is one of the better TVs at this size we’ve seen in recent years.

The 43PUS6703 is clearly a TV made to a price. It looks perfectly fine, but turns out to be rather plasticky and lightweight. Though at this affordable price, we perhaps shouldn’t expect too much.

Besides, the 6703 does get one of Philips’s premium features, Ambilight, which extends the colours of the onscreen action onto the wall around the TV using a series of LEDs on the back. It not only looks spectacular, it also draws the eye into the picture and makes the screen seem bigger than it really is.

Another premium feature is 4K HDR, available via two of the HDMI inputs and Netflix. The app selection as a whole also includes Amazon Video in 4K (but, disappointingly, not HDR), YouTube, iPlayer, ITV Hub, All 4, My5, Rakuten and Deezer, while built-in Freeview Play makes for a decent TV experience.

Unlike TVs further up the Philips range, which run Android TV, the 6703 has a bespoke operating system. It’s rather basic in appearance and a little sluggish in use. Combined with a fairly poor remote, it equates to an inconsistent and frustrating user experience at times.

As the TV supports HDR, that’s where we decide to start. Unfortunately, it’s where the 43PUS6703 is most disappointing. Unlike its 50in sibling, the 50PUS6703, which provides a brilliantly dynamic HDR image for a bargain price, this 43in model struggles to do the superior signal justice.

Here, you have two choices: a bright image that looks artificial and over-enhanced, or one that simply looks like SDR. For what it’s worth, we choose the latter, because while it’s dull by HDR standards, it’s also quite natural, with balanced colours, sharp edges and a decent degree of depth.

The TV makes a more compelling case for itself with SDR content. We play Logan on Blu-ray and it proves punchy, fairly vibrant, nuanced and detailed. Black levels are pretty good, too, although there’s not a great deal of dark detail.

Drop to standard-def, with a DVD or the built-in Freeview tuner, and the results are predictably rough. Compared to a more sophisticated TV, this is a noisy image, but nonetheless still watchable with decent colours and detail.

Motion is an issue with all sources, though. The default Standard setting is over-cooked and artificial, and there’s a fair bit of blur if you opt for the Movie mode or turn the processing off entirely. Still, we haven’t seen a TV at this sort of money that gets something as tricky as motion processing perfectly right.

It’s little surprise that a TV at this end of the market is unsophisticated in its audio performance, so we aren’t too disappointed by the slightly muddled and flat delivery, which struggles to do justice to a movie or premium TV show.

However, with more basic content, such as news, soaps or documentaries, it’s perfectly listenable, and you won’t miss any important dialogue.

Even at this price, you really should budget for a separate sound solution. For an extra £60, the JVC TH-W513B soundbar provides a vast improvement on what the TV itself can muster.

It’s a shame that genuinely excellent TVs at this sort of size are so rare. The sad truth is that if you’re genuinely limited to 43in, the best you can hope for is ‘good’.

With that in mind, this Philips is one of the better options around. Its natural picture across sources, good selection of apps, Freeview Play and Ambilight make it a fine option for everyday viewing.

But if you are able to fit in a slightly bigger TV, the 50PUS6703 is a significantly more capable all-rounder. And it costs just £50 extra.