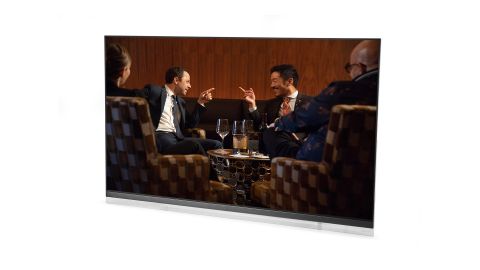 Buy a flatscreen TV, then add a soundbar. That tends to be our advice when reviewing televisions these days. Of course, this isn’t always the case and there is always the odd exception to the rule, where the audio exceeds expectations. LG is hoping that its LG OLED55E9PUA TV will do just that.

This TV comes straight out of LG’s OLED class of 2019, which has already proved a hit thanks to the five-star OLED65C9PLA. Moving up to E9 from C9 set brings a couple of aesthetic tweaks, but the main difference is to be found in the audio performance.

There are more speakers (4.2ch compared to 2.2ch), more amplifier power (60W against 40W) and slightly different positioning (forward-firing vs down-firing). Look closely at the E9 and you can see a narrow, perforated piece of trim just below the screen, which makes it look as though the TV already has a soundbar built in.

Before you settle down for a Netflix binge, the sound options are worth investigating. Firstly, we employ the One Touch Sound Tuning feature, which uses a test tone to set up the TV’s sound to suit your room layout.

We also switch on the on-screen toggle for the Dolby Atmos mode. While this TV is never going to be able to recreate the effects of a dedicated multi-speaker Atmos system, the E9 sounds more expansive with it turned on. If you’re watching Dolby Atmos-encoded TV programmes and movies, there’s no reason not to.

Brand new for 2019 is LG’s new audio processing technology, AI Sound. This employs an algorithm to create a virtual 5.1 effect. While it opens up the soundfield, adding extra width and height, there’s a trade-off in that you sacrifice body and solidity. This shift in balance means we don’t think it really suits standard programmes broadcast in stereo.

Compared to the C9, this E9 sounds bigger and bolder, with a greater sense of scale and composure. We play The Dark Knight, and as Batman embarks on his one-man mission to extract Lau from Hong Kong, Hans Zimmer’s soundtrack combines with the action, amplifying the sense of drama.

Sounds such as gunfire and breaking glass don’t sound too thin or hard and there’s a pleasing solidity to dialogue. As Lau is whisked away using Batman’s skyhook, the rumble of bass as his plane flies overhead is reinforced with impressive weight and power.

The OLED55E9PUA adopts the LG’s Floating Screen design. We saw something similar on 2018’s E8 range, but it has been refined on the E9. The bottom edge of the set is transparent, giving the impression that the TV is hovering above the surface it’s on. The screen is as slim and slender as you could wish for from an OLED, with the tiniest of bezels running around the edge.

As is the case with most OLED TVs, the need to squeeze in all the sockets, tuners and speakers means that the side profile bulges out towards the bottom. It does nothing to dampen the appeal of this TV. Even at its thickest point, it’s a little over 5cm deep, although you’ll still need to factor in the depth of its weighty stand if you want to place it on a rack or cabinet.

LG has packed the OLED55E9PUA with features, including four HDMI inputs that all meet the HDMI 2.1 standard – that means they support eARC (Enhanced Audio Return Channel) and VRR (Variable Refresh Rate). LG’s premium OLEDs are the only models we’ve seen that currently offer this, and although we wouldn’t class this support as vital, it’s good to know in terms of future-proofing your TV.

Other connections include three USBs, ethernet, optical, aerial and satellite connections. There’s a wired headphone output plus the option of beaming sound to a pair of Bluetooth headphones.

Powering the E9 is the second-generation version of LG’s Alpha 9 processor from 2018. New for this year’s models, it adds AI technology designed to automatically optimise picture and sound, based on the content being played and the room in which the TV is located.

The new chip also means 2019 sets should be smarter, allowing for more advanced and conversational interactions with LG’s ThinQ, Google Assistant and Amazon Alexa. Hold the mic mutton on the Magic Remote and the relevant virtual assistant performs a range of tasks, such as weather forecasts, changing inputs and searching for specific content, all of which the LG does with minimal fuss.

LG’s WebOS operating system has a familiar look and feel with the colourful tiles that pop up in the Launcher Bar acting as your main way of navigating between channels, apps and inputs. A couple of new tweaks have been added for 2019: the tiles are slightly shorter, and you can preview content in compatible apps without having to open them.

The E9 also features LG’s new Intelligent Edit Function, which automatically orders your most used apps toward the front of the Launcher Bar. All the expected apps are here – Netflix and Amazon Video are on board, as are pay-as-you-go movie streaming services such as Google Play Movies & TV and Rakuten. 4K resolution is supported, although not all HDR formats are. The E9 can handle Dolby Vision, HDR10 and HLG, but not HDR10+.

While WebOS is still bright, colourful and intuitive, the other menus, especially those concerned with picture quality, are still overly complicated and confusing. There are separate picture presets for standard dynamic range content, HDR and Dolby Vision – it requires a bit of thumbwork to get the TV set up for all of them and that’s before you start looking into the different picture modes.

Thankfully, the E9’s picture looks good straight out of the box. From the TV’s standard preset, we’d suggest turning off any energy saving, eco and noise reduction modes, changing the aspect ratio to its Original setting and perhaps bumping the sharpness a couple of notches.

We’d also suggest going into the TVs TruMotion setting to tweak the motion processing manually. Experiment with Deblur and Dejudder to find the best balance for you.

LG’s policy when it comes to its OLED ranges throws up a number of positives on the picture front. Four model lines, C9, E9, W9 and R9 all boast identical TV technology. The same panel, the same picture processing engine, and in theory, the same picture. The only range that doesn’t fit the same bill is the entry-level B9, which uses an older first-generation Alpha 9 processing engine instead of the new second-generation variant.

And our testing with the E9 shows it’s a match for the C9. The IMAX formatted scenes on The Dark Knight 4K Blu-ray look spectacular. During the opening heist as the robbers zip-line between buildings, the large expansive shots show a superb level of detail and insight.

When the Joker drops by Gotham General to see Harvey, the detail and definition in his scarred, psychotic face and smudged make-up is eerily realistic, especially when illuminated by the bright, punchy beams of sunshine that linger during the scene.

As the hospital goes up in flames, the LG serves up a fiery inferno of piercing yellow and orange hues that contrast with thick, black, billowing clouds of smoke. The E9 reveals the grainy texture of the film transfer, but still manages to produce a wholly convincing picture.

We turn our attention to the 4K disc of Aquaman. It’s a clean, crisp transfer, which the LG takes great pleasure in displaying. Like The Dark Knight, this film also has a number of IMAX formatted sequences and they all look stunning. As Aquaman and Mera dive off the cliffs of Sicily into the ocean below, you’re completely drawn into the scene.

As the camera switches to an overhead shot, the LG’s clarity and crispness produces an immense sense of depth, with the image remaining stable and controlled. The greens of the forest and greys and whites of the cliff face are carefully considered, while the topaz blue ocean appears vivid and inviting. The picture on our 55in E9 sample does appear a little warmer than the 65in C9 sample we’re comparing it to, but generally speaking, the two share similar traits.

Even when faced with upscaling Full HD Blu-ray or daytime TV, the LG doesn’t panic. Viewing broadcast TV in HD, the picture shows great stability and crispness. You’d have no idea the E9 was doing so much number-crunching behind the scenes.

But it’s not quite a perfect picture While the LG is great at communicating the brightest whites and the deepest, darkest blacks, the best Samsung QLEDs extract even more detail at either end of the scale. And while the LG’s motion handling is perfectly acceptable, it isn’t rock solid. We still find rival motion processing tech such as Sony’s MotionFlow just a little more natural. Having said that, you’ll still struggle to find such a generally well-rounded performance at this screen size.

Having said that, you’ll still struggle to find such a generally well-rounded performance at this screen size. The OLED55E9PUA produces just the kind of picture we’d hoped for and supplements it with excellent sound quality. You’d need to spend upwards of $500 on a soundbar that would improve the audio significantly.

At the time of writing, there’s only a $300 gap between this model and the equivalent 55in C9, which seems a reasonable premium. The fact you’re getting improved sound not only justifies the jump in price, but also cements this television’s five-star rating.