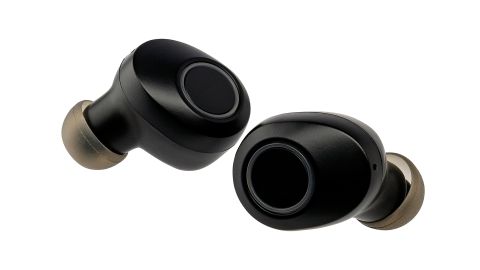 Neat design and an attractive price, but there is a limit to what the SoundBuds can do for your music collection

Since Apple’s AirPods arrived in 2016, the race has been on to produce something with equal battery life and sound quality, but cheaper – making true wireless in-ear headphones one of the fastest growing markets in audio.

The idea is that competition breeds innovation, with diminutive models boasting ever-increasing battery life, smaller cases and newer tech inside their tiny housings.

Groov-e, producers of budget headphones since 2009, could hardly resist the pull of progress and, following its PlayBuds in 2018, the Groov-e SoundBuds are the company’s second true wireless in-ear offering.

The units themselves aren’t especially small by today’s standards, but they fit well into our ears. There are two alternative tips supplied, but it is quite difficult to swap between sizes – the tip’s inner mount doesn’t entirely fit over the driver housing.

With Bluetooth 5.0 on, long-pressing the single, round, multi-function button on each bud means they pair first with each other and then with your phone, telling you that they’ve paired and found a ‘second device’. Provided your phone is within a 10m range, they will automatically connect the next time they’re switched on.

Battery life is a slightly underwhelming four hours, but an extra 10 hours can be had from the case, which is itself charged via a micro-USB port.

The case is about the size of a box of mints and can be turned on or off with a little power button.

Battery life Up to 4 hours (one charge)

Wireless range Up to 10m

This is a novel thing in itself, but the biggest feature is that between the buds’ charging ports there’s a numerical LED display for battery status, where a flashing ‘5’  is practically empty and ‘100’ is full.

The pulsating light around the multi-function button on each in-ear is red when charging, blue when approaching full battery and off when fully charged – at which point the case stops charging.

It’s a useful (and possibly unique) feature; as soon as you click the SoundBuds back into their nests and turn on the charger, you’ll know precisely how much juice you have left. If one bud isn’t quite settled right, it flashes blue until it’s properly stashed too.

Anyone old enough to remember those little flying spaceships in Batteries Not Included will delight at the sight of the in-ears charging in their case. The lid is translucent, the spherical lights on charging buds beneath look like eyes and the lip of the case lid also vaguely resembles a mouth.

After running the Groov-e SoundBuds in, we cue up a Spotify playlist to see how they sound. First up is D’Angelo’s Untitled (How Does It Feel) and the True Wireless Stereo delivers the singer’s languorous skulking between our ears with a decent amount of detail. The treble is clear and pleasing, with higher register vocals alongside a walking high hat nicely dealt with.

However, there is a notable shortfall in timing – the laid-back, subtle swing of a track that rests heavily on the back of the beat isn’t quite being faithfully reproduced. There’s a slight harshness through the forward midrange, which means that dynamic representation – the rise and fall of each note – is a problem.

In addition, the bass is a little late, coming off slightly bloated. Even the dramatic end of the track, stopping mid-chorus as it does to leave us with only reverb, isn’t as solid and well-handled as we’d have hoped.

We switch to Manu Chao’s J’ai Besoin De La Lune, and while the deftly plucked strings through the treble come across with clarity and detail, the speedy kick drum driving the track isn’t dutifully happening. There’s a good distance and separation between Chao’s voice and the backing vocals, but that harshness through the midrange persists.

At this price-point, there are bound to be compromises. The Groov-e SoundBuds offer only entry-level battery life, at four hours. And while the build and fit of the units themselves and the case design are acceptable for the price, there is a limit to what the SoundBuds’ drivers can do for your music collection.

If you want something really quite cute and truly wireless for little money, the Groov-e SoundBuds are worth a shout. But perhaps this is one time you should keep in mind the old saying about only ever really getting what you pay for.