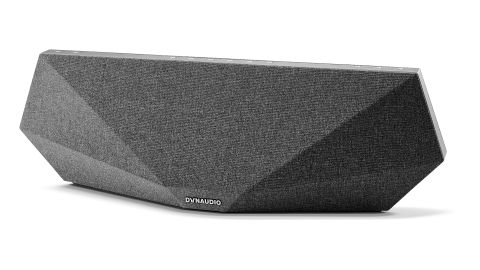 Love or loathe the way it looks, you can’t help but be won over by how the Dynaudio Music 5 sounds

Danish firm Dynaudio can boast several triumphs over recent years. The Xeo 10, Contour 20 and Special Forty hold five-star verdicts – the latter even scooping a What Hi-Fi? Award this year – and that’s just the brand’s standmount speakers.

The Dynaudio Music 5 is the second-largest one-box speaker in the company’s inaugural, four-strong Music series. So can it continue the line of Dynaudio successes?

As we unbox the Music 5, we are reminded of a huge, Indiana Jones-style ruby or the objects in the abstract chamber in Pixar’s Inside Out. Under that angular cloak, the Dynaudio Music 5 comprises five drivers powered by a 50W apiece for a total of 250W of amplification: two 25mm soft-dome tweeters, two 8cm midrange drivers and a single 13cm woofer, plus a digital optical input.

The Music range features the same magnesium silicate polymer drivers and soft-dome tweeter tech you’d find in the brand’s range-topping Evidence Platinum loudspeakers. Our mains-powered Music 5 is marginally smaller than the 300W Music 7, but bigger than the portable Music 3 and Music 1. While Dynaudio Music speakers can be grouped together for multi-room listening in the Dynaudio Music app, the Music 5 can also be used on its own.

The build quality feels resoundingly premium, with a brushed metal panel featuring circular, occasionally pulsating control buttons across the top of the unit alongside a sleek LED indicator for volume.

Set-up is done through the Dynaudio Music app, which calmly feeds us each sequential instruction. Once plugged in, waving a hand over the speaker alerts the Music 5 to your presence and switches it from standby to on.

Dynaudio prompts us to set up a profile and link our Tidal and Qobuz accounts (a free nine-month Tidal subscription is included with your purchase). Once the Music 5 is set up on our wi-fi network, we’re good to go. There’s aptX Bluetooth too and if you have an iOS device, there’s also AirPlay support.

At this point, Dynaudio seeks to corral our music streaming services into one place, by asking us for our favourite artists. As we ‘like’ each suggestion, more pop up for approval. Eventually, we end up with several Music Now personal playlists entitled ‘Discovery’, ‘Rock’, ‘Metal’, ‘Favourites’ and similar.

For some users, this process will seem extraneous and fussy, while for others, it will make laborious hours spent curating dinner-party playlists a thing of the past. If you like the idea of personalised music without having to prep it yourself, it’s a nice touch.

The Dynaudio Music app is well designed and easy to use. Our favourite thing here is a two-dimensional, four-way slider interface – a neat way of controlling the bass and treble.

Two other important app-controlled functions here are NoiseAdapt and RoomAdapt. The former deploys compression when needed so that sound can cut through a noisier room – useful during loud parties.

Meanwhile, the RoomAdapt technology uses digital processing to sense where it has been placed and optimise performance on the fly. We move our Music 5 from the centre of our room, to a corner, to almost flush against the wall, and it does appear to actively adapt to its new position.

But there are a few issues with the software features. There’s no Spotify Connect, though you can always go into Spotify’s app and play tracks via Bluetooth on an Android, and have the additional option of AirPlay on an iOS device. On the latter, there’s no AirPlay 2 onboard, nor is there voice assistant support.

Finally, from the Dynaudio Music app itself, you cannot control an attached NAS drive directly. The Music 5 works as a UPnP/DLNA device, but you will need a third-party app, such as Bubble UPnP or similar, in order to play music from a NAS or stream music to the Music 5.

But thankfully, these issues neither overshadow the other impressive features offered by the Dynaudio Music 5, nor indeed its sonic performance.

We initially bypass our curated My Music playlists and cue up Melissa Etheridge’s Come To My Window on Tidal. The gentle percussion alongside her pensive rock vocal and initial bass riff are presented with articulation, breadth and depth. As the drums kick in, the Music 5 continues to display agility and precision despite a weighty bass kick.

We press play on our My Music ‘Rock’ playlist, and Guns 'N' Roses’ November Rain on Qobuz is tonally smooth and refined as the keys, strings, flute, triangle and eventually drums come through with character, but also a pleasing, musical cohesion.

We play Radiohead’s Creep and things remain smooth, laid-back and expansive, with a room-filling and listenable sound. We sample the same track through our control speaker, and find the Naim lighter, subtler and more expressive dynamically. There’s an urgency that the Dynaudio product doesn’t have, and we conclude that the Naim just edges it for timing.

But the Dynaudio Music 5 boasts superiority in other ways. In a larger room, it boasts better weight, scale and authority. It also offers something smooth, detail-rich, refined and resoundingly listenable – a sonic performance that will suit many tastes.

The Dynaudio Music 5 is a powerful proposition, but one that still displays the sonic nous to keeps things refined. Its looks are a matter of taste, but the Dynaudio range is nothing if not distinctive. While the Award-winning Naim just edges it for both subtlety and a slightly livelier sound, there isn't much in it.

Depending on your room size and requirements, the Dynaudio Music 5 brings a meatier – and more easily adaptable – performance to the table.