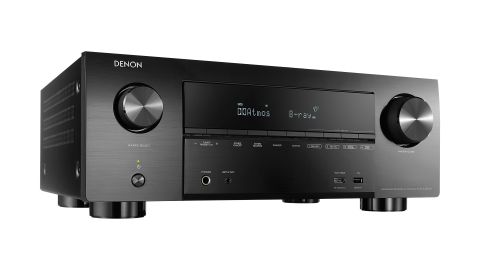 In recent years, Denon has followed a pattern of minor tweaks to its line-up of AV receivers every year or two, adding relevant technologies and conducting a little sonic fine-tuning.

Sometimes the differences between generations can appear minor. But that’s not the case with the AVR-X3600H.

The changes to this unit amount to more than a new model number on the same chassis: there are now four extra channels at your disposal, up from seven to 11.

Those are driven by nine power amplifiers, feeding the AVR-X3600H with a claimed 180W of power per channel. In practice, that means you can set this new Denon up in a 5.2.4 or 7.2.2 Dolby Atmos configuration, or add an extra two-channel amp to make full use of the processing power with a 7.2.4 set-up.

Those extra two amplification channels are also assignable to the AVR-X3600H’s second zone, so you can run a stereo set-up in another room while the amp runs your 7.2 home cinema system concurrently in the main one.

So, this receiver is already closer to the more premium last-generation AVR-X4500H in its functionality than it is the Award-winning AVR-X3500H it replaces; and Denon is keen to impress that is the case in more senses than just its supplementary channels.

Lift the lid and you will see the same extruded aluminium heat sink as found in the latter, while the company has also built in a stronger power supply and power transformer to cope with the AVR-X3600H’s increased sonic responsibility. This means that even if you neglect to employ those extra channels, you’ll still feel the impact of the upgrades across a smaller surround sound system.

Not that it means you’ll need to compromise elsewhere. Denon has maintained its eight HDMI inputs – seven on the back and another on the front – which all feature full HDCP 2.3 support and accompany a further three HDMI outputs.

On the input front, you also get one USB, two component and three composite video connections, then two each for optical and coaxial digital and six analogue audio ins – one of those specifically for the AVR-X3600H’s on-board moving magnet phono stage.

The 6.3mm headphone output also remains for personal listening, but Denon has promised an update before the end of this year that will allow you to use a pair of Bluetooth headphones while audio continues to run from the main channels.

This means you won’t have to turn the amp up to high levels if someone you’re watching with has hearing difficulties; they can simply pop on a pair of wireless cans and hear the film as clearly as everybody else.

You’ll want to run a firmware update if you buy the AVR-X3600H, as Denon has recently welcomed Dolby Atmos Height Virtualization technology to its AVR family. It is designed to offer the effect of height channels even when no physical speakers are available, and now features alongside Dolby Atmos, DTS:X and DTS Virtual:X in a quartet of 3D audio software Denon has made available.

And you can add to that IMAX Enhanced, another DTS technology that bolsters the AVR-X3600H’s lengthy list of certifications. With compatible source material, IMAX Enhanced promises to improve the imaging, sound, scale and clarity of your system’s performance.

With such comprehensive support, it is likely you’ll want to use the AVR-X3600H not only as a home cinema amplifier, but as a hub for your home entertainment. It features Apple AirPlay 2, Bluetooth and built-in internet radio, Spotify, Amazon Music, Tidal and Deezer for all your audio streaming needs, is fully integrated into the company’s HEOS multi-room ecosystem, and can all be controlled via Amazon Alexa, Google Assistant and Siri when bundled with the relevant bolt-ons.

But the reason we love this Denon AV receiver is due to its stunning performance. Not only does it score highly across the board, it pips its predecessor sonically in pretty much every respect.

In many ways, it all stems from that upturn in power. It isn’t so much the fact that this is an altogether more powerful amplifier than the Award-winning AVR-X3500H – already a mighty receiver in its own right – but its muscle feels leaner and punches tend to sting more.

Where its predecessor would thump, the AVR-X3600H is able to snap, already in position to throw again by the time you’ve felt that first impact. The floor still rumbles as it wobbles the drivers on our subwoofers, and maybe even more so, but most impressive is how Denon has managed to tighten up what was already a speedy response.

That tends to aid clarity, too, with the whole presentation tidied as a result. You might not notice a great deal more insight in quieter scenes, but there is certainly more space for the amp to work when things become cluttered. Crashes and explosions appear now to be accompanied by more auditory information and cinematic fallout, making for a more immersive experience.

That’s where the improvements in the Denon’s performance are most felt – unsurprising given the changes to its physical make-up – but, as is often the case, the company’s tweaking and fine-tuning has led to noticeable gains elsewhere, too. That includes dynamics, where the AVR-X3600H edges closer towards its more expensive siblings, combining its knack for finding the subtleties of expression with a mature and textured presentation.

Even Denon’s integration of that Dolby Atmos Height Virtualization tech is impressive. While it doesn’t compare to using dedicated height speakers, there is an opening of the soundstage. Without losing too much focus – one of the company’s fortes across its range of AV amps – the AVR-X3600H gives the impression of a more three-dimensional soundfield. We’d opt for letting the amp concentrate on the physical channels you have tethered to it, but with certain discs, we can imagine the virtual Atmos working well.

There was little point in Denon taking its Award-winning home cinema amp back to the drawing board, but the addition of two further amplification channels has brought more comprehensive changes than we’re used to seeing from its regular model upgrades.

The result is an AVR-X3600H that is sneaking up on its bigger sibling in terms of performance and connectivity. If you have a grand to spend on an AV receiver, Denon should still be at the top of your list.