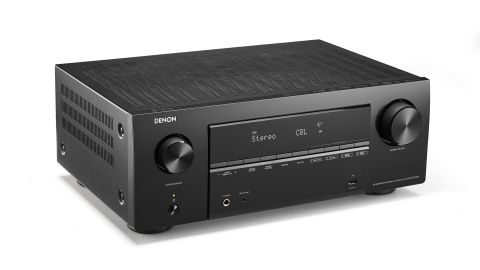 Denon has bossed it in the home cinema receiver category over the past few years. Having already succeeded in continuing its five-star tradition with its 2020 X-Series AVRs at the top and middle sections of the market, it’s time to turn to the company’s entry-level AVR, the Denon AVR-X2700H.

On paper, the noticeable addition over its predecessor is the single 8K/60Hz HDMI 2.1 input, which can also pass through 4K video at 120Hz, so opening the way for the potential demands of the PlayStation 5 and Xbox Series X.

To dismiss the extras on this year’s model as purely for gamers would be a mistake, however. Each year Denon’s engineers tweak its AVR components, and the firmware that manages them, to squeeze out even more sonic class – and 2020 is no different.

There’s little to separate the Denon AVR-X2700H from its predecessor, the AVR-X2600H, as far as look and feel go. This is a sturdy device that needs a solid shelf and plenty of room to breathe. There are some structural changes worth noting, though. While the X2700H boasts that 8K support, it does drop down to six HDMI inputs overall from eight, and also loses the quick access AUX1 that was in the front face next to the powered USB 2.0 socket (which remains), as well as the AUX2 that was on the rear.

The channel configuration is unchanged. There are seven power amplifier channels available (alongside outputs for two subwoofers) which can be set in anything up to 7.2 or 5.2.2 arrangements, and it’s still rated at a claimed 150W per channel.

There is no front ‘trap door’ as found on the higher-specified Denon AVRs, and there’s a less rich selection of easily accessible on-device controls. You can still switch inputs, tune the radio and operate a second listening zone with the hard buttons on offer, but you’ll need to use the fully featured remote for the majority of your set-up and playback options.

There may be just the one HDMI 2.1-certified input, but the other five have not been ignored. They’re each compatible with the Variable Refresh Rate (VRR), Quick Frame Transport (QFT), and Auto Low Latency Mode (ALLM) lag-minimising technologies to fit with the demands of next generation content.

They can also cope with the full suite of HDR standards, with HDR10+, HDR10, HLG and Dolby Vision all represented. Both of the HDMI outputs are also 2.1-certified, so those lucky enough to have a TV and projector in their system will be able to send 8K@60Hz and 4K@120Hz out to them both. eARC (Enhanced Audio Return Channel) is supported as well.

The AVR-X2700H isn’t quite as flush for 3D audio formats as the upper-end models, but the big hitters of Dolby Atmos, Atmos Height Virtualization, DTS:X and DTS Virtual:X are all present and correct. Those looking to decode IMAX Enhanced and Auro-3D soundtracks will need to make the step up to the Denon AVR-X3700H or beyond.

Voice control through Alexa, Google Assistant and Siri-enabled devices remains, as well as all the wireless standards for music found in the previous model, including AirPlay 2, HEOS, Spotify and Tidal.

One nice new addition on this front is that all of Denon’s 2020 X-Series AVRs are now ‘Roon Tested’ devices, meaning that you can have Roon music playback through your speaker package as well.

The Bluetooth offering has also been revamped this year such that AVR-X2700H can direct audio to a set of wireless headphones at the same time as your speakers – handy for any hearing-impaired family member or if you want to nip out for a cup of tea without missing a moment.

As the baby of the 2020 Denon X-Series, the AVR-X2700H has a slightly lighter version of the Audyssey speaker calibration technology than its bigger brothers. Nonetheless, the MultEQ XT measurements need only a few small tweaks to the levels before we’re happy with the set-up. You can also switch between two sets of Audyssey measurements if you can’t quite make up your mind.

If we had to use one word to describe the sound of this receiver, it would be ‘confident’. The AVR-X2700H doesn’t try too hard to impress, as a nervously underpowered budget amp might, with huge blasts from the front pair or the subwoofer during the space dogfight in Guardians Of The Galaxy Vol.2.

It’s bigger, better and more cultured than that. It has even greater authority than last year’s model and it never strains to exert it. The two subwoofers in our 7.2 set-up growl with control whenever called upon, never once detracting from the crystal clarity of the music in the soundtrack, the voices or surround effects.

It’s an easy and effective listen. No matter how hectic the action becomes, this Denon never misses a beat. It passes the laser blasts from speaker to speaker in a wonderfully coherent manner and, no matter the scene, creates a genuine sense of place.

Virtualised height effects are available through Dolby’s processing technology for that added dimension. While it certainly lifts the lid a little, you do lose some of that insight and excitement in return. For some people and certain content, the trade-off could be worthwhile, although our preference is to stick with the less processed 'Direct' mode.

Switching to Close Encounters Of The Third Kind, we hear this Denon’s brilliance with scale as the UFOs come joyriding through the quiet Indiana countryside. It produces an excellent ebbing and flowing hum behind the chaos and confusion when the alien craft picks up Roy Neary’s truck and gives it a good shake.

There are wonderful details of the bottles, cans and newspapers spilling out of the glove compartment, the revving engine and the maniacal ringing of the railway crossing bell, and then just the still of the cicadas in the night when the clamour suddenly stops.

Listening to the tracks on the Talking Heads concert film Stop Making Sense, we find the AVR-X2700H is just as gifted musically. The acoustic guitar strings are clean and clipped with a superbly textured, jangling to the strings as David Byrne plays Heaven on top of Tina Weymouth’s tight, fuzzy bass.

Even slower songs, such as this, come across with a sense of momentum. Obviously, it can’t compete musically with even a budget stereo amplifier but, all the same, our listening time with this AVR is so enjoyable that it’s difficult to tear ourselves away long enough to start telling you how much we like this receiver.

It’s a big win here for Denon. There are many cheaper AVRs but none of them is anything like as polished. Its mature approach and effortless sense of timing make for a feeling of home cinema sound that’s authentic to the movie theatre experience, even at an entry-level price.

The sonic improvements over its predecessor are marked, even if it’s the 8K passthrough and next-generation gaming technologies that steal the upgrade headlines. Denon’s engineers have worked their magic once again and we’d encourage new buyers to opt for the AVR-X2700H over older models for its extra ease and expression.