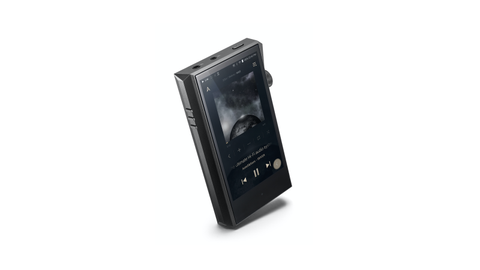 A&K's smaller, lighter and "more affordable" portable music player could quite possibly be the ultimate in high-performance audio

The Astell & Kern SP1000M could be the company’s most enticing high-resolution music player yet. After listening to user feedback about its flagship players, the company has come back with a smaller, lighter model that it hopes will be a little more pocket-friendly.

The icing on the cake is that Astell & Kern is promising better sound quality into the bargain – if a seriously expensive portable music player costing almost £2000 can be labelled as such.

With its angular lines and edges, a prominent multi-function volume wheel on the side and a shiny, all-aluminium body, the SP1000M is a textbook example of Astell & Kern’s design. It looks smart in the new Lapis Blue finish of our review sample and immediately feels lighter than comparable hi-res music players.

Astell & Kern claims to have reduced the overall volume of the SP1000M by 18 per cent compared to the preceding SP1000, while the weight has been reduced by almost half. Weighing 203g, it is heavier than our 2019 Product of the Year, the A&norma SR15 (154g) and indeed the iPod Touch (88g). But this is a more premium affair, which includes a level of heft befitting its hefty price tag.

As well as the jogwheel on the right-hand side for controlling the volume, you'll find three little buttons on the left. These allow you to skip back, stop/start and skip forward.

On the bottom of the unit, there’s a USB-C connection and microSD slot, while the headphone and balanced outputs are on the top, alongside the power button, which doubles as the screen on/off.

The compact package is certainly pocket-friendly and well made, but we still find ourselves using two hands to do most functions, most noticeably to reach the screen on/off button. The jogwheel is easy for a right-hander's thumb, albeit it requires a fair old scroll to make noticeable volume adjustments and we do find ourselves knocking it unintentionally from time to time. Perhaps we’re just a bit clumsy.

It's lighter, smaller and promises better sound, so what gives? That smaller chassis means a smaller 3,300 mAh battery, promising 10 hours of playback rather than 12 hours on the previous SP1000 model. You also get less storage space, with a 128GB memory rather than 256GB, but there is always the option of expanding this using a microSD card up to a maximum of 1TB.

The screen is smaller than before too, offering a 4.1in HD display, down from the 5in one of its sibling. It keeps the same resolution and the same, freshly-designed user interface, which has been updated with the addition of a new 'virtual back key' – a familiar idea to anyone who's used a smartphone – which helps navigation around the UI.

The UI takes a little getting used to (if you’re new to A&K) but is fairly simple with a sidebar main menu giving access to your folders and music services. There’s also a dedicated sub-menu for MQS (Mastering Quality Sound). This is A&K’s acronym for lossless and high-resolution audio music. There’s a tab within this sub-menu for DSD, too.

The screen looks great. Sharp, colourful and clear, and a long way removed from the old digital player experience of years past. It’s still not a flagship smartphone experience, though, so if you’re used to expansive screens where you can swipe to your heart’s content, this is not that. The keyboard is a little fiddly for our fingers and it’s not always instantaneous in its response.

Inside, the CPU and DAC are the same as the previous model. So that means two AK4497EQ DACs, one for each stereo channel, and an Exynos 7420 octa-core CPU. What is new is an upgraded audio block layout, which aims to shorten the signal path and deliver better sound thanks to reduced noise and improved output level.

Also new is an open app service, allowing developers to use the A&K application programme interface (API) to enable direct loading of apps on the player. What's the difference? For full functionality – such as offline playback on Tidal – you need to load the apps on rather than have them embedded. Supported apps include Amazon Music, Apple Music, Qobuz, SoundCloud, Spotify, Tidal and Tune-In Radio.

Smaller, lighter and better sound: that's the promise. And the SP1000M doesn’t disappoint. The presentation is clean, clear, punchy and detailed, and music sounds as it should. It can make similarly priced machines, let alone more affordable digital audio players, sound dull, muffled or lifeless, thanks to the crisp transparency offered by this Astell & Kern device.

Listening to Halftime from Nas’s classic Illmatic album (in 24-bit, 96kHz FLAC), the bass line is impeccably formed, punchy but tight, delivering just the right amount of depth to ensure weight without impeding the pace of the track. Trumpet and vocal loops sit alongside chugging drums and percussion, each sounding natural and complete in itself, while also fully part of the whole track. Clear but textured vocals complete the perfectly presented picture.

We play Tom Waits’ I Hope That I Don't Fall In Love With You and enjoy that feeling of being truly connected to the artist, something that a great music player and excellent headphones can deliver better than a hi-fi system. We experiment with the Grado GS1000e, AKG K701 and Sony WH-1000XM3s (through Bluetooth), but through each pair, every guitar pluck and strum seemingly reveals every vibrating string, as well as every inflection in Waits’ famously bruised voice.

Tchaikovsky: Waltz Of The Flowers from The Nutcracker Suite, performed by the Bruckner Orchester Linz, sounds beautifully delicate and light on its feet before the dynamic and expansive strings are released, with the stirring conclusion delivering as much pomp as anyone could surely handle.

Jumping from classical to dance music, rock to acoustic, and across hi-res files, Tidal and even Spotify, the SP1000M maintains a solid grip on every element of the audio. This Astell & Kern player is almost effortless, as gentle moments packed full of insight are handled as comfortably as punches of aggression or excitement – and with the feeling that it’s all in a day’s work.

The Astell & Kern A&ultima SP1000M is pretty much faultless when it comes to sound quality. It’s not cheap and we have minor quibbles with the controls, but when it comes to the business of playing music, it’s impossible to find holes in the performance.

Astell & Kern listened to user feedback in the making of this machine, now, we’re delighted to say, it’s our turn to do the listening.