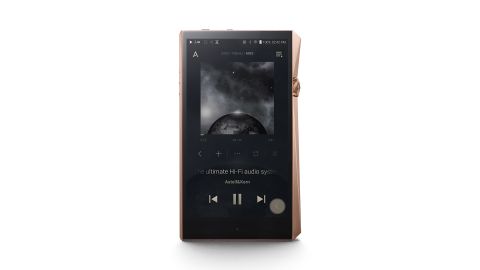 Not very portable or accessibly priced, but it sounds like no other PMP we’ve heard

A few thousand pounds may not be considered a flagship price for a lot of the kit we test – that’s still mid-range for hi-fi speakers and some way short of the figure attached to top-tier TVs, for example.

But for a portable music player to have such a price tag is pretty unorthodox. Yet Astell & Kern’s flagship A&ultima SP2000 comes in at £3399 ($3499 / AU$4999) – around three times the cost of even the fanciest smartphone and any other other music-playing device you can carry around in your pocket.

However, it’s unlikely this ‘portable’ player will spend much time in your pocket – the SP2000 is about twice the thickness of a phone and weighs over 400g. Holding it in one hand for a period of time, we feel a sudden empathy towards early adopters of the first mobile phones.

That heft is at least reassuring of its excellent build quality. The SP2000’s sandblasted aluminium chassis is a lavish statement for Astell & Kern’s design creativity. A solid block carved with the geometrical interest of an ornate stained-glass window, perfectly complemented by the choice of shimmering stainless steel and copper finishes, it’s hard not to be impressed by it. If a portable music player can ever come close to looking like it’s worth thousands of pounds, it’s this one.

Despite its proportions, it’s intuitive to hold, the small play/pause and track skipping buttons (on the left) and the trademark volume wheel (on the right) lining up perfectly to where your thumb and index finger naturally sit. A pleasantly minimal socket and button layout – the bottom features a USB-C charging socket and microSD slot, the top accommodates 3.5mm unbalanced and 2.5mm balanced jacks –  is helped by the fact the volume wheel doubles as a power control.

But as with previous Astell & Kern products, the edges and corners of the SP2000’s jewel-like construction are a little cutting. We’d slip on the protective, emerald leather case (included) for the sake of both your palms and the player – even if it does hide the SP2000’s beauty.

Astell & Kern would argue that the considerable size is necessary to achieve its technical ambition, and the SP2000 is densely packed with high-end engineering and features.

It shares many features with its siblings: MQA file support; dual-band wi-fi and Bluetooth; built-in access to Spotify, Tidal, Qobuz, Amazon Music, Apple Music and Deezer apps (some come pre-loaded, some require installation); and the neat AK Connect which turns the player into a DLNA server or renderer, with control via the AK Connect app (iOS, Android) on a smartphone or tablet.

The interface is consistent across the range, a minimalist white-on-grey affair that complements the player’s physical sophistication. The pull-down scroll bar for accessing connectivity, modes and settings will be more familiar to an Android user than one who uses iOS but, otherwise, its design is pretty universal – a sidebar is a gateway to artists, albums, songs, playlists, folders and services, while albums (complete with artwork thumbnails) can be scrolled in various list and grid forms.

Playback screens are album art-heavy with song information all clearly displayed on the bright 5in HD touchscreen.

Naturally, though, the SP2000 justifies its flagship supremacy with exclusive advantages. It’s the first of the company’s players to use separate, independent audio channels between the Unbalanced and Balanced outputs, delivering more output as a result (6Vrms for Balanced, 3Vrms for Unbalanced).

It also boasts more advanced DACs (AK4499EQ) in its dual configuration, which A&K says is taken full advantage of thanks to its complete redesign of the amplification stage and circuit design.

Native playback is extended to 32-bit/768kHz PCM and DSD512 so the SP2000 should be able to play anything you throw at it. It should be able to store just about everything you want, too, thanks to its 512GB of internal storage. That’s twice the amount found in previous A&K flagships and means you can store around 2000 albums, based on CD-quality FLACs. Those with exhaustive music collections can expand storage further by simply popping in a microSD card up to 1TB in capacity.

From the 3700mAh battery, A&K promises eight hours of continuous playback – a figure based on CD-quality FLACs playing at around half the peak volume (there are a massive 150 volume steps). That’s a few hours less than the SP1000 and SE100 that sit directly beneath it, and not ideal if you want to be entertained for a transatlantic flight, but considering the amount of built-in storage and the power it’s pushing out, the slight battery hit isn’t wholly surprising.

Considering the SP2000 shares a line-up with two 2019 What Hi-Fi?-Award-winning players, the A&futura SE100 and A&norma SR15, we aren’t surprised by its performance – even if it is staggeringly good. It may be double and four times the cost of those siblings respectively, but it sounds it.

In our time spent testing the SP2000, we are particularly taken with the player’s openness and level of clarity and detail, which combined make music both easy and interesting to listen to.

Play Kamasi Washington’s Askim and the player’s generous soundstage, and the subtlety it fills to each corner of it, laps up the density and intricacies of the jazz ensemble’s recording. The impassioned saxophone in the spotlight has all the dynamic freedom and textural attention it requires, but not at the expense of the instrumental accompaniments – the SP2000 lets the wild percussion, trombone and keys all play their part. Even when the choral vocal comes in on top, the sonic canvas still sounds clean and comprehensible.

Similarly, the busy opening of Radiohead’s Reckoner can all too easily sound like a jarring racket; like an out-of-practise marching band. But through the SP2000 there’s rhythm to each of the shakers, drums and cymbals – and a wonderfully logical pattern. The SP1000 (£1800), which we listen to for comparison, sounds similarly organised, but there isn’t the same degree of clarity, spaciousness or subtlety that makes the track so engrossing through the SP2000.

Its neutral balance opts for refinement and sophistication over outright liveliness, but that’s no criticism. Stream Mura Masa’s No Hope Generation (from Tidal over wi-fi), and there’s no lack of restraint on the Astell & Kern’s part – the upbeat tempo is exuberantly carried, the beat punchy and shifting.

We find the Focal Stellia closed-back headphones and Grado GS1000e open-backs are both matches made in heaven, despite their differing balances. But the SP2000’s character should sit right with any decent pair of high-end cans, particularly those that prioritise openness and insight.

Of course, while headphones may be the predominant pairing for a music player, the SP2000 is also a system source in its own right. And, considering its large library capacity and music streaming capabilities, one we wouldn’t hesitate to use.

We hook up the SP2000 to our reference system – Burmester 088/991 Mk III amplifier and ATC SCM50 speakers – via a 3.5mm-to-RCA cable, playing songs stored on the player and from streaming services, and it holds its own.

While you shouldn’t expect the level of performance of a class-leading dedicated music streamer at this price, it’s more than capable – its authoritative, rhythmic nature coming to the fore.

Not many portable music players will find common ground with the SP2000 – not in terms of price, build or performance. This is a one-of-a-kind player, which is as impractically portable as it is inaccessibly priced.

But as a high-end music player – both as a straight-up PMP in a desirable headphones set-up and as a streaming-capable source for your speaker-led hi-fi – the A&ultima SP2000 is the sort of musical and multi-talented device that’s otherwise hard to come by. Forgive its weight and average battery life, and you won’t be sorry you chose this fantastic-sounding device.