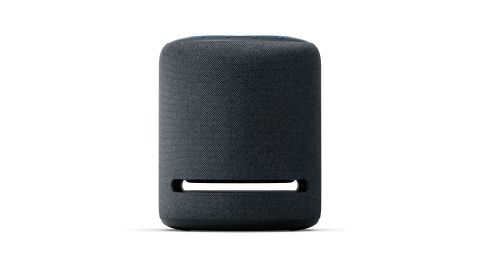 Amazon attempts to get serious about sound, and the Echo Studio almost delivers

The Amazon Echo Studio promises not only to be the best-sounding Echo speaker yet, but a smart speaker truly fit for audiophiles – bold claims for a product costing just £190.

As well as boasting upgraded internals fit for CD-quality and hi-res audio, which are both now available from Amazon Music HD – the latest incarnation of the company's music streaming service – the Echo Studio also promises to deliver 3D audio via tracks encoded in Sony's 360 Reality Audio and Dolby Atmos.

So can the Echo Studio make Amazon's smart speakers a realistic proposition for those who value good sound, and give Sonos, Audio Pro and Apple a run for their money?

The Echo Studio continues the same design language of previous Echo speakers, being cylindrical in shape and covered with a charcoal-coloured fabric mesh. It’s considerably larger than any previous Echo and manages to dwarf the Sonos One and Apple Home Pod.

There are volume buttons on the top, along with a mic mute and Alexa-wake button. And yes, the blue ring of light remains so you know when Alexa is listening.

The position of the drivers allows the Echo Studio to use a new feature of the Amazon Music HD service, its library of 'hundreds' of songs available in Dolby Atmos Music, which sees the audio format used to mix tracks with greater control over different elements and the positioning of different elements in the soundfield.

Universal Music Group and Warner Music Group are offering tracks in the Dolby Atmos Music format, while there's also a rival format in the shape of Sony's 360 Reality Audio, which is also supported by the Amazon Echo Studio.

Elsewhere, the Studio has all the typical features of Echo devices. You can set timers, reminders and alarms; control smart home devices; play music; get facts and trivia, all by asking questions or barking orders at Alexa.

Fire up the Echo Studio for the first time and Alexa will tune its sound for your room's acoustics by firing out a number of different test tones and reacting to its readings. The whole process doesn't last longer than a few seconds, but you will need to recalibrate the speaker if you move it around.

You can access tone controls through the Alexa app for Android and iOS, plus change volume manually and pair another Echo Studio or manage and group any other Echo speakers you own.

Amazon has also built added flexibility into the Echo Studio. You can wirelessly connect one or two of the speakers with either a Fire TV Cube (1st or 2nd Gen), Fire TV Stick 4K or Fire TV (3rd Gen) to create a Dolby Atmos home theatre set-up. It's not 5.1 surround sound, but hooking up a stereo pair presents a decent opportunity to upgrade the audio coming out of your TV.

Producing immersive, directional audio is always going to be difficult, but doing it from a single speaker source is even more challenging. So how does it fare?

We begin with a couple of tracks designed to showcase the Echo Studio’s handling of 3D audio. Ariana Grande’s 7 Rings played through Amazon Music HD is presented with height and space, elevating the lead and background vocals.

It’s an open, airy presentation that suits the 3D environment well. The speaker sits you in the jaws of a tall soundstage, where there's a good amount of detail to percussion and high frequencies.

The deployment of the track’s bass raises an eyebrow, though. There’s power and weight, but also a tendency to overpower the track. The Echo Studio isn’t the most controlled or subtle when it comes to dropping the tune's big, bold bassline.

We switch to Gregory Porter’s Mona Lisa cover and, again, the speaker is in its element with this particular 3D mix. There’s impressive height to all the various sections of the orchestra, mixed with good dynamics and an impressive sense of scale. There isn’t much in the way of bass to accompany this track, so you’re mainly left with an ensemble of detailed and entertaining mids and highs.

We play The Jackson 5’s I Want You Back, remixed for 3D audio and things are a bit more hit and miss. Michael’s lead vocal sounds a bit lost in the soundstage and the balance feels slightly off. The quality of your 3D experience may vary a bit, depending on the final mix.

Of course, only a fraction of songs are mixed this way, so it's important to note many of the positive attributes transfer over to stereo tracks. Destiny’s Child’s Say My Name delivers a clear vocal cutting through and a good sense of separation between the different percussive elements.

The Studio is also capable of a little processing wizardry to add height to stereo mixes – simply keep the 'upmixing' setting enabled on the Alexa app. But don’t expect the same quality of results you’d get from a well-tuned Atmos mix.

With the Destiny's Child track, the setting sucks some of the drive and impetus from the song. The result is a loss of drive and drama. Similarly, the Manic Street Preachers' Motorcycle Emptiness sounds solid, cohesive and balanced in normal mode. But, enable the ‘Stereo Spatial Enhancement’ in the app and it all sounds a little unbalanced and over-processed.

Amazon recommends keeping this setting on at all times so you can enjoy the effects of the new sound, but we’d be tempted to turn it off.

There's no doubt the Amazon Echo Studio sounds bigger and goes much louder than some rivals, such as the Sonos One. But the Sonos sounds more composed, offering a more cohesive sound and higher quality bass. It can't summon the 3D processing of the Echo Studio, but we prefer its overall balance.

Amazon's eagerness to push sound quality and its adoption of hi-res audio has to be a good thing, and the Echo Studio is a capable contender in the crowded smart speaker market.

It sounds big, goes loud and there's a good level of detail and dynamics. We're not convinced entirely by the way it handles bass, and we wouldn't exactly call it audiophile quality, but for the money, the Echo Studio has a lot going for it.