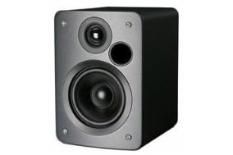 Top-end improvements are all well and good, but the 1010is are at best a sideways move from the old 1010s

The 1010is aren't what we were expecting. After all, the old 1010s were five-star performers in their own right, as well as forming a major part of an Award-winning multichannel package. And in our 2007 Awards, the 1010i 5.1 speaker system made off with another gong.

We kind of supposed the 1010is would make a flawless stereo pair… which just goes to show (a) how wrong you can be and (b) how important it is not to make assumptions about hi-fi.

You'd be hard-pushed to spot the difference between these 1010is and the model they replace, with the only visual change being the addition of some text around the tweeter housing. What's more significant is that it's a new tweeter, and the cross-over is new too. Otherwise, the Q Acoustics are the same compact, tidy, well made products they've always been.

Nicely judged top end
And in isolation, they're more than adequate performers. The olde worlde charms of The Grateful Dead's Uncle John's Band suit them well – the vocal harmonies in the midrange are detailed and lucid, and that new tweeter offers a nicely judged top end.

And while, as the cabinet dimensions suggest, these aren't the ideal speakers if you crave low-frequency attack, what bass there is has decent grip and timing.

However, there's a definite lack of scale here, and a distaste for big dynamic shifts in music. The 1010is might be handily compact, but your midi or micro deserves better. And if it's a budget separates system you're buying for, there are other speakers offering more for this kind of money.

This result has made us look at the subwoofer and centre speaker in the 1010i 5.1 package with even more respect.