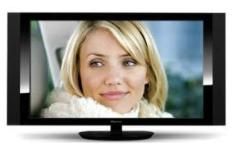 Is it worth the extra money? Only you can decide but we're certain it's better than our Award winner, the PDP-LX5090, and that's really saying something...

We've seen so many impressive Pioneer plasmas recently, it's becoming difficult to find new superlatives. But amazingly, the Japanese company's newest model, the KRP-500A, manages to eclipse even its illustrious forebears.

Although the luxurious black finish is bang-up-to-date, the set's configuration marks a return to the two-box design of older Pioneer sets. The main display is just a panel, with no TV tuner and a strictly limited array of inputs; even speakers are optional.

Everything else is found in an external 'media receiver', a slab of glossiness featuring a fold-down fascia panel that hides key inputs, plus card-reader slots.

Unusually, it also includes a digital satellite TV receiver, although not to Freesat specification: it'll receive free-to-view (unencrypted) satellite signals, but without the electronic programme guide (EPG) of Freesat. The remaining input sockets are on the unit's rear.

So, why re-adopt the two-box design? Well, it makes wall-mounting neater and easier but it also cuts down on the depth and weight of the panel itself: at just 64mm thin, it's possibly the slimmest 50in screen we've seen.

Substance to match the style
But style and design considerations apart, the KRP-500A's real appeal lies in its performance.

It boasts two new picture modes: the first is an enhanced version of the automatic picture-adjusting 'Optimum' system found in older sets, modified here with an external colour sensor probe that clips magnetically to the side of the set.

The end results were overcooked for our tastes, but you might like it, and the onscreen graphics are certainly flashy.

But we were far more interested in the other new mode, called 'Pure'. Essentially, it cuts out all the picture processing you don't need, and sets the Pioneer to an almost uncannily accurate 'out-of-the-box' picture set-up that, unless you're prepared to get a specialist picture calibration done, is pretty much as good as it gets in a mainstream TV.

Movement, colour depth, black level and detail are all simply fabulous. And even with lower-quality content, the good news continues, with the obvious caveat that not even the best off-air signals look quite as clean as Blu-ray.

Of course, nigh-on £3000 is a lot to spend on a 50in TV in the modern market, and we can understand many of you being drawn to the almost equally impressive PDP-LX5090, which is around £300 cheaper. But if you want the best, cost-no-object, then the KRP-500A is worth every penny.