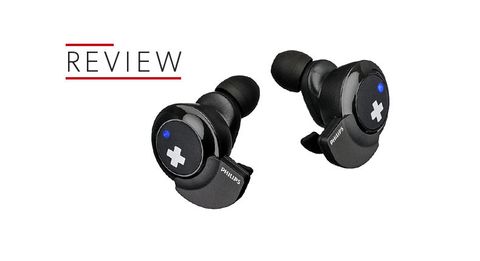 When most of us say we’ll do something, there’s at best a one-in-five chance it’ll ever actually happen. Philips, though, is evidently a far more reliable entity.

When it promises us an abundance of low frequency action, as is the case with its new BASS+ headphone range, it undeniably delivers.

We are referring specifically to the SHB4385 – a pair of true wireless in-ears shoehorning an impressive 8.2mm driver into each earpiece in their quest for that much-coveted low-end heft.

As they sound so well fed, it’ll probably come as little surprise these Philips are fairly sizeable in general, but their C-fit stability fins – which clasp to the inside of your ear like an inebriate on the Underground – help them fit snugly even when you shake your head.

Remarkably, Philips says you could keep up such behaviour for a full six hours before needing to recharge and, with the carry-case holding power for another full charge, it’ll be double that time before you need plug it back in.

Both headset and charging case take around two hours to reach full power.

There isn’t much more in the box, save for a USB charging cable and three sizes of rubber earbuds. That means fans of foam buds, or the rather unappetisingly named double-flange variety, will have to grab some from Amazon.

But at £100, half the price of Sony’s Award-winning WF-1000X, all we’re really asking of the SHB4385s is to facilitate a comfortable fit and a fuss-free pairing process.

All that's needed is to press and hold the back of each headphone – which is also your means of controlling playback, volume and calls via a number of click variations – and the SHB4385s show up for pairing.

Philips has made no secret of its striving for powerful bass, yet still it is striking just how much low end response it has managed to extract from a pair of wireless in-ears – even with those sizable drivers.

Playing Beck’s Guero, a record that isn’t shy of mining deep into the frequency range, the balance is predictably skewed somewhat, but not so much it becomes problematic.

Our issue with the bass is softness, lack of detail and lax timing. Tracks such as Black Tambourine and Go It Alone, where the bass lines request a little agility, are unrefined.

Notes are mashed rather than defined, and there’s a dearth of rhythmic insight to really drive them.

For those who crave fat bass, however, with less impetus on clarity and agility, this kind of balance could well suffice. If so, issues elsewhere might also be overlooked.

Such as: as well having little rhythmic personality, dynamic verve plays only a minor role in the overall SHB4385 performance.

Beck’s vocal delivery, for example, is often so laid-back as to be almost horizontal.

These Philips don’t quite let him sound bored – which in itself marks them above one or two wireless in-ears we’ve tested – but most of his nonchalant expression is all but lost.

Still, there is enough overall detail to make the SHB4385s listenable, if not overly insightful, and the design does keep out a fair bit of outside noise as we meander round the office or across the road to buy some lunch.

Mostly, though, these are the answer for anyone seeking true wireless in-ears at a reasonable price, and whose main concern is big, fat low end.

Philips has certainly not created an all-rounder, but show us a person who says they don’t love sometimes love a bit of bass and we’ll show you a fibber.