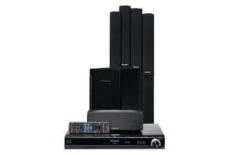 Comfortably capable of some of the best audio and video available, this Panasonic delivers genuinely impressive performance from one box

Having been mightily impressed with Panasonic's SC-BT200 Blu-ray system, we thought it only right that we tested its loftier sibling.

As the main receiver unit remains the same, we have high hopes. The change comes with the speakers: the four compact satellites being traded for four floorstanders – and only for a little extra outlay.

The centre channel is fairly slight and sits on its comfortable feet with a fairly slim profile.

The four identical floorstanders are a more substantial affair: they each require a few screws to connect the circular foot to the bottom of the speaker and again to join the two parts of each speaker.

Full spec for the money
As with other similar systems, they don't feel particularly robust or look too alluring – hey, the subwoofer has a chipboard ‘finish' on the rear – but thankfully they make up for it in terms of sound quality.

The Panasonic has Blu-ray and DVD playback, an integrated iPod dock compatible with music, video and photo playback, a USB input, an SD card… the list is almost endless, though it doesn't include HDMI inputs – there's just the one HDMI output for HD pictures and sound (it can decode all HD codecs).

Cracking BD images and sound
In our eyes the more important business comes in the shape of Blu-ray playback.

Playing zombie slasher Dead Snow, the SC-BT205 sets itself apart from its rivals. The level of insight with both audio and video is a step above its rivals, the system producing a poised, balanced sound capable of punch and subtlety.

Nothing else really conveys the tense calm before a zombie-slaying quite like this system. DVD images are crisp, while step up to the BD transfer of Gladiator and the wheat fields sway to glorious affect.

Top it all with fine usability – it's a machine that has an auto-set-up with a calibration mic – with the result that you have the ideal all-in-one introduction to Blu-ray surround sound.