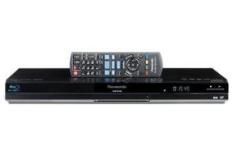 The ’BD65 is a dependable, very capable entry-level machine that can’t quite muster class-leading performance

For a large part of 2009, Panasonic's Blu-ray players had to play second fiddle to Sony machines that offered excellent performance at extremely competitive prices.

But the original five-star First Test of the 'BD65 would suggest this could be Panasonic's year.

To a large extent, our first opinions of the 'BD65 still remain: Styling is simple and unassuming – there's no touch-sensitive controls or fancy finish here. Build quality feels a bit flimsy, but at this price you can't really expect a bomb-proof unit.

All the essentials covered
The 'BD65's feature list isn't as extensive as those of close rivals, but you aren't robbed of any of the essentials that you'd expect from a budget Profile 2.0 player.

You can stream or decode Blu-ray's high-def sound formats over HDMI. There's an SD card slot on the front of the unit for attaching memory to use with BD-Live content and a USB input on the rear to play media from a hard drive (including MP3 and DivX HD files).

There's also an ethernet port that allows for a wired web connection.

When it comes to picture processing, Panasonic uses its own PHL Reference Chroma Processor Plus, claiming accurate colours and sharp images with Blu-ray movies.

Edge definition isn't as razor sharp as the top performers, but this is still a big improvement on the last generation of Panasonics.

Neutral skin tones
As the movie's weird world opens up before your eyes, colours appear bold, yet skin tones are natural and convincing. Dark scenes are handled deftly too, with strong black levels and good shadow detail.

Drop down to DVD and the Panasonic shows similar strengths, although again the very best rivals pip it for precision. Motion handling is good by usual budget standards, but it isn't flawless.

Sonically, the 'BD65 opts for an open, airy presentation with strong dynamics and a decent amount of weight to low frequencies. Spin Beyoncé's Single Ladies and there's ample punch and drive, although timing can be bettered by its competitors.

Panasonic still has a very good player with the 'BD65, but there are a couple of sensational new entries now available that force us to knock a star off its rating.