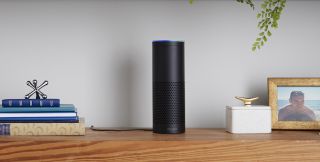 The benefits to this update are that the Echo can now utilise more sophisticated Bluetooth sound systems. The separation of the Echo's microphone from the drivers could also make giving commands while music is playing more accurate.

Though a nice addition for those who already own an Echo, anyone wanting voice-activation functionality without being locked into specific manufacturers (such as Sonos or Tibo) may be better off with an Echo Dot due to its low-cost and inclusion of an in-line jack.