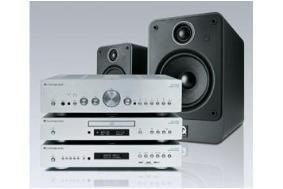 When Cambridge Audio released the Azur 650A stereo amplifier and Azur 650C CD player last summer, we were enthusiastic to say the least.

After all, their predecessors, the 640A and 640C, had been long-time favourites at What Hi-Fi? Sound and Vision.

"Both machines are a carefully considered evolution, and are none the worse for that," we said in our review. "The 650A has an open, clean sound that's packed with detail; while it's hard to think of a CD player that keeps so organised when pushed as the 650C."

Both amp and CD player come as part of our amazing giveaway, along with the partnering 650T DAB+ radio and a set of Q Acoustics' fantastic standmount speakers, the 2020s.

Our First Test read: "The 2020s are a vigorous, energetic listen... a genuine five-star product.'

Now we've got three of these systems to give away. To enter, head on over to our competition page. Good luck!