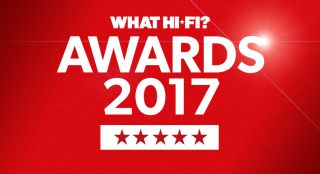 After months of strict and stringent product testing, the What Hi-Fi? Awards night has arrived, and we can finally announce all our ‘Product of the Year’ winners.

There are 29 of them: one from each of the 25 product categories, as well as the customary Readers' and Temptation Awards, plus the new Innovation of the Year and Hall of Fame gongs.

You can see the full list of 29 Product of the Year winners here.

The KEF LS50 Wireless all-in-one streaming system pulls off the seemingly impossible trick of picking up two POYs on its own, taking home Awards for both the best hi-fi system and our new Hall of Fame category. And the good news for KEF doesn't stop there - it’s also behind our favourite speaker of the year, the Q350 standmounts.

Other twice-triumphant brands include Rega – its Planar 3/Elys 2 turntable and Brio stereo amplifier are both Products of the Year – and Sony, whose conquests include its UBP-X800 4K Blu-ray player and STR-DN1080 home cinema amplifier. Apple has also dominated the smartphone and tablet categories with the iPhone 8 Plus smartphone and iPad tablet, respectively.

As for this year's new Award categories, the JBL K2 S9900s “are among the very best speakers money can buy,” making them our favourite Temptation Product of the Year, while Bang & Olufsen’s BeoSound Shape is a clever wall-mounted wireless speaker system that wins our ‘Innovation of the Year’.

Last but not least, this year’s Readers’ Award lands in the thoroughly deserving hands of the Naim Uniti Atom streaming system.

Head over to the What Hi-Fi? Awards microsite to see all 104 winners.

The What Hi-Fi? Awards 2017 winners revealed

A brief history of What Hi-Fi? Awards magazine covers